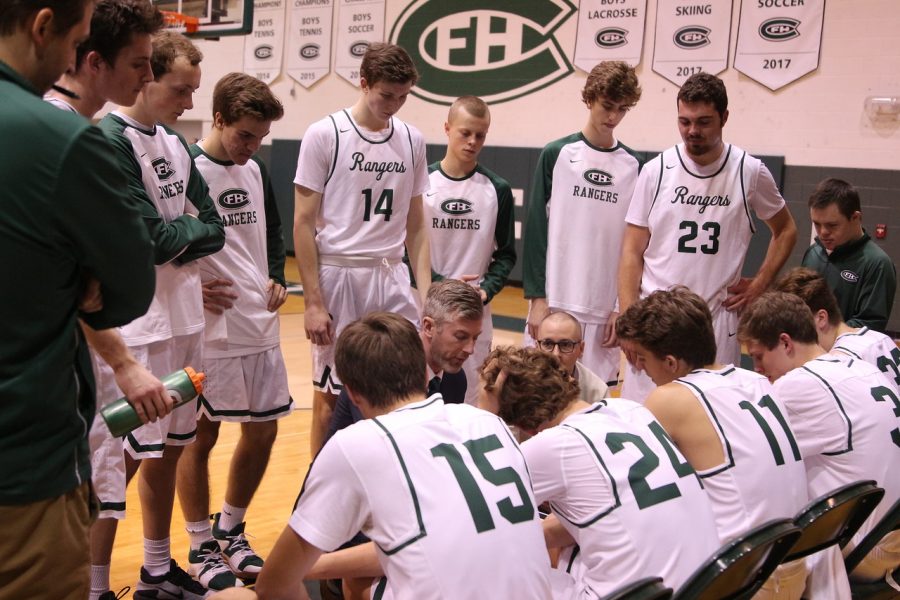 Junior guard Mitch Wilkinson and senior forward Jake Ball made the two biggest plays of the night on back-to-back possessions to seal a 56-54 victory for the Rangers over the Ottawa Hills Bengals.

With the game tied at 53 with a minute remaining, the Rangers were content with running the clock down and looking for the last shot in regulation. With 30 seconds left, Mitch tried to throw the ball to junior guard Jimmy Scholler, but sailed it out of bounds. After a foul that saw the Bengals hit one of two free throws, Jimmy pushed the ball up the floor. Jimmy got into the lane and kicked the ball out to an open Mitch, who calmly sunk the three to put the Rangers up by 2 with six seconds left. The Bengals guard wasted no time, as he drove past his defender up the court; it looked like he was going to score and send the game to overtime, but Jake met him at the rim and was able to block the shot as time expired to seal the win for the Rangers.

“When I threw the ball away I felt like I really let the team down,”  Mitch said. “When Jimmy got me the ball, the shot felt good off of my hand, and I was just hoping it would [go in] so my mistake didn’t end up costing us. JB (Jake) saved that game for us with that block, that was huge.”

The first quarter, like most of the game, was very sloppy. The Rangers and Bengals combined for 10 turnovers in the opening quarter. Senior forward Dan Deindorfer helped to pace the Rangers with 6 points. The Rangers made a concerted effort to feed the ball into the paint to Dan early on to test the Bengals’ frontcourt. Thanks to Dan’s hot start, the Rangers led 14-10 at the end of the first quarter.

The second quarter was more of the same for the Rangers. Mitch threw down a thunderous one-handed slam to give the Rangers an 8-point lead, forcing the Bengals into a timeout. Ottawa Hills came right back, as they scored on each of their next four possessions; 6 of the 8 points came off of Ranger turnovers to tie the game up at 18, forcing FHC to call a timeout.

Dan scored the next 6 points for the Rangers and added another bucket later in the half to score 14 of his 17 points in the first half. The Ranger defense was very good all night, especially in the first half when they held the Bengals to shooting 28% from the field and got a combined 4 blocks from Mitch, Jake, and Dan; however, the Bengals were able to convert Ranger turnovers into 8 points and 7 offensive rebounds into 10 second-chance points, resulting in them only trailing the Rangers by 4, 31-27, at the half.

“I was getting really good position against their bigs down low,” Dan said. “I was a little surprised that they didn’t really change up their defense. All of my teammates on the wing did a really good job of getting me the ball down low.”

The fourth quarter was a seesaw affair, as neither team could pull away for more than a 3-point lead. Jimmy really took over the game in the fourth, as he had 8 points, including a go-ahead layup with just over four minutes remaining. The Bengals held a 3-point lead for the majority of the next two minutes before Jimmy made a spectacular play. He was able to weave his way into the lane and make an unorthodox layup while being fouled. He calmly stepped up to the free throw line and tied the game at 53. The game stayed at that score until the aforementioned sequence from Mitch and Jake to secure the victory.

With the win, the Rangers improve to 7-3 on the season and 3-1 in OK-White conference play. The Rangers are back in action Tuesday night when they go on the road to battle with their their arch-rival, the undefeated Forest Hills Northern Huskies.