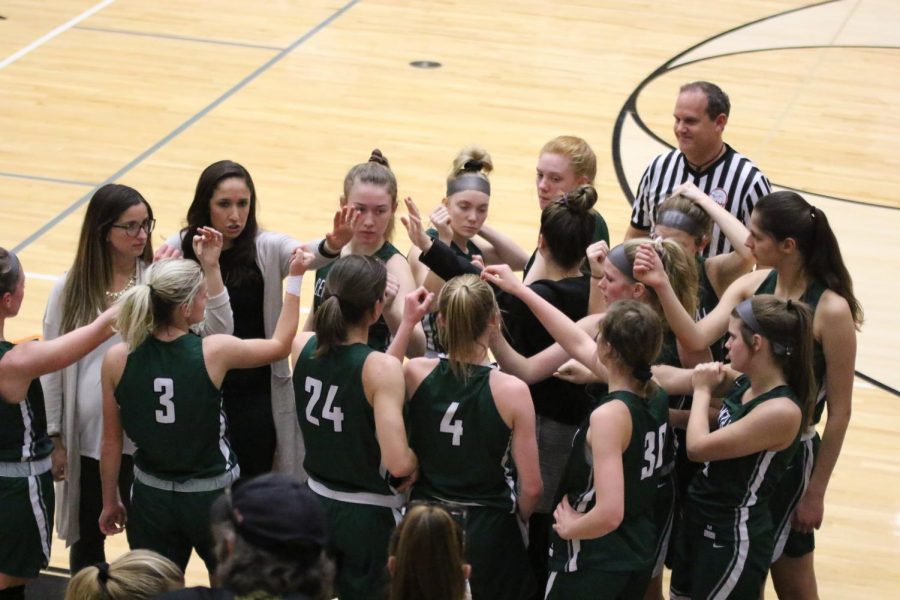 “It’s almost [Theryn’s] confidence that is lacking a little bit; I don’t think she realizes how good she is,” head coach Kristina Prins said. “IQ wise, she’s on a different level than anyone else on the court, even [above] me sometimes. She has very good court awareness.”

The Lady Rangers started the game hot with an 8-0 scoring run and a suffocating press. FHC had 10 team steals on the night, many of which came in that first quarter. Theryn scored 6 points in the first, along with junior Ally Ringler earning 6 of her 10 points on the night for the Rangers to lead 18-5 after one quarter of play.

Ally had a solid all-around night, as she racked up 2 steals, 4 rebounds, and 2 assists in addition to going five for six shooting from the field; however, what doesn’t show up in the final stat line is Ally’s biggest contribution game after game.

“[Ally] just brings an intensity; if it’s a big play and we need something, she’s the one busting her butt and diving on the floor,” Prins said. “[She does] things that don’t show up in the stat book but are essential to our team.”

Theryn had two stellar back-to-back plays in the second quarter to show off her high basketball IQ Prins praised. After jumping a passing lane and easing in a layup, FHC got the ball back under their own basket due to the very effective press. Theryn then inbounded the ball off of the back of an unsuspecting Ottawa Hills player, assisting herself for 2 more points. Fueled by great passes from Theryn and the rest of the lineup, FHC continued to be the dominant team and led 36-15 at the break.

Theryn and senior Claire Baguley led the team on offense all night and contributed 19 and 18 points, respectively, while each had 3 assists on the night. The team as a whole had 13 assists and was noticeably better at finding the open shooter than in games past.

“I think for the most part we actually distributed the ball really well,” Theryn said. “Usually we have some dribble drives and some people that just dribble a lot, so I think today we ran our plays really well and distributed [the ball] around.”

The Rangers, once again, were not able to play four consistent quarters of basketball. The Bengals came out of the half sinking a lot of shots while FHC entered its usual rut. The Lady Rangers still led 52-30 after the third, but the momentum was clearly with Ottawa Hills, whose shooters got hot from all over the court.

“In the first half, I think we played up to our level, and I think that showed based on the score,” Claire said, “but in the second half they outscored us, and we definitely did not play to our full potential.”

FHC had established enough of a lead to clear the bench with two minutes remaining in the fourth quarter to get every player some valuable minutes in this 60-46 win.

“I’m glad we got everyone to play tonight,” Prins said. “That was really nice; I feel like there’s not many times where we get to do that, and the girls [off the bench] played really well tonight.”

This win improves the Lady Rangers’ record to 7-2 (2-1) on the brink of a rivalry game with Forest Hills Northern on Tuesday. FHC will have the home-court advantage, but this matchup has come down to the wire many times in recent years, and the Huskies will be a stiff test for the Rangers.

“Northern is always really good, and it’s always a tough game because it’s a rivalry,” Claire said. “We’re definitely not going to be able to have any down quarters; we need to piece a full game together to beat a really talented Forest Hills Northern team.”