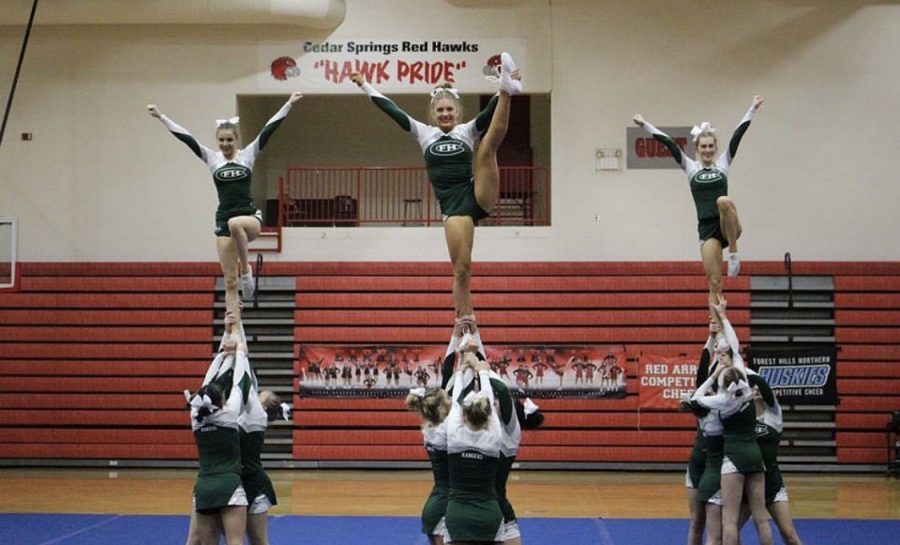 The Forest Hills Central competitive cheer team had a major comeback performance yesterday, as it competed in the LMCCOA Invite at Caledonia High School. After taking third out of five teams in their last meet, the Rangers successfully took fifth out of eleven at the Invite.

As round one commenced, the Rangers took action. They were able to successfully showcase their abilities and score a fantastic 210.30 in the round. In the second round they were able to repeat the first and pull off a tremendous amount of points in the round, scoring the fifth-most amount of points, 198.28. This gave them a total of 408.58 points headed into the third and final round and put them in fifth place.

The Rangers had performed very well in the first two rounds, but it was nothing compared to their performance in the third round. Having a nearly perfect routine, the Rangers scored big with 289.00 points. Not only did the Rangers perform extremely well, allowing them to place fifth overall, but they also suffered no penalties throughout the entire competition.

Several of the Rangers put on stellar performances and really brought their all to the competition, one of them being junior Meredith Carpenter. Meredith brought a special energy to the matt and let her talents shine throughout the entire meet. Senior Grace Conn and junior Elizabeth Hoving suffered a head-to-elbow collision before the meet during a warm-up; however, both girls went out there and performed their routines perfectly. Lastly, senior Maija Dickens and junior Sami Walquist gave it their all and showed the judges a performance to remember.