Macho Volleyball will be a competitive, exciting start to Winterfest festivities 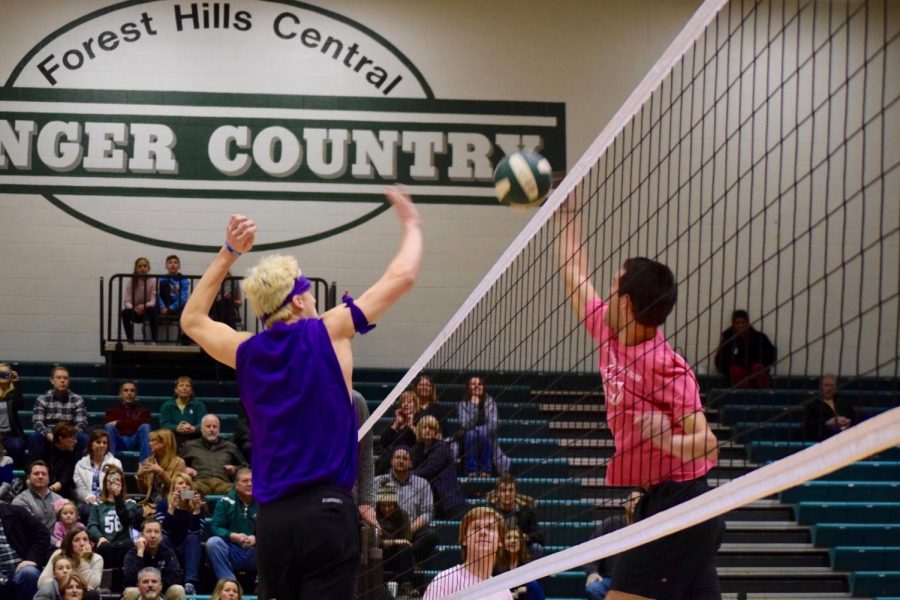 During the month of February, as snow dusts the ground, teachers pile on the homework, and cabin fever sets in, the students of FHC greatly anticipate the biggest event of Winterfest Week: Macho Volleyball, the epic volleyball game where the juniors and senior boys go head to head.

“[Macho Volleyball] just kicks [Winterfest week] off to such a good [start],” said senior Tessa Guerre and Macho Volleyball coach. “Starting with the game gets everyone hype, and everyone comes. It’s so fun, [and even though] it’s just our school, it’s super competitive.”

Because of the nature of Macho Volleyball, all of the emphasis and pressure is put on the boys, yielding more enthusiasm and participation from them.

“The fact that it’s more about the guys, I like that,” Tessa said. “It is centered more towards them, so they show up and participate.”

“It’s something for people to look forward to, get excited about, and think about [in the weeks leading up to] Winterfest [week],” junior Macho Volleyball coach Ellie Ingraham said.

Beyond just kicking off the week with great team spirit and healthy competition between the upperclassmen, the game also knits each grade closer together, as senior Tate Hallock can attest.

“My favorite part is obviously the game because we’re going to kill the juniors,” Tate said. “[I also like] the practices because it’s fun hanging out with all the senior guys.”

Each team and grade—mainly those in the game— discover a renewed sense of camaraderie because of the activity. However, besides the players, Macho Volleyball is also a fun, bonding experience for the coaches as well, as they mentor and pump up their teams. After forming some new friendships through last year’s game, Tessa expects the team to be just as close, if not closer, than they were last year.

Another fun part of coaching for Tessa was seeing how quickly the players got excited over a game that she’s been playing since before middle school.

“During the game, the guys take it so seriously,” Tessa said. “It’s so funny to us because they actually go hard. They are usually some crazy plays that happen, so I’m looking forward to that. The actual game will be really fun.”

As it gets closer to the big game, the two classes’ rivalry with each other becomes more intense, inspiring more excitement from both sides. From Tate’s perspective, an interesting part of the game will be finally being on the opposing side from his usual teammates.

“I am most excited to spike [the ball] at [juniors] Mitchell Wilkinson and Jimmy Scholler,” Tate said.

In typical fashion, the seniors expect a win over the juniors while the juniors believe the exact opposite and are just as confident that they will gain a win of their own.

“We will beat the seniors,” Jimmy said. “We have better players in the front and back row.”

All jokes and rivalries aside, the game creates many great memories for the teams and for those spectating. The competitive spirit and excitement never really die out, even years later.

“All the smack talk we did [last year] with the seniors was fun,” Tate said. “Then, when I spiked [the ball] on [former senior] Bryce Clay was super fun.”

Even the coaches take what they learn and see at the Macho Volleyball game with them. Tessa fondly remembers what the game and training were like last year, especially the funniest memories.

“Last year, Tate was a key player,” Tessa said. “Tate was at the serving line [at practice], and he served like 15 balls in a row. It got to point where the other team couldn’t return any of them, so Tate pulled up a chair and just served sitting down for the rest of the game.”

While the many juniors and seniors have been living for the volleyball game’s hype, this year, none of the process—between tryouts, training, and the game itself—has even happened yet.

In preparation for the beginning of it all, after so many snow days, the five junior and senior coaches have been coming up with game plans for each of their teams. However, there have been some new changes that are being implemented this year that they’ll have to adjust to. This year, instead of only allowing 18 players on a team, there can now be up to 24.

“[Having 18 players] was hard last year,” Tessa said, “[and additionally,] we are supposed to get everyone in both games. We can have 12 people on the court, but that’s weird. [In a real volleyball game, there are six people on each side, and] with six, everyone knows their own space.”

Once she and the other coaches create a team, Tessa hopes to better hone her coaching skills, considering what happened during last year’s game when her team—the then-juniors—took a hard loss to the senior class.

“This year, we are thinking our lineup out [better],” Tessa said. “Before, we just took our guys and split them up evenly. This year, we are actually going through and doing positions—just front row/back row stuff—but we can’t do what we did last year because it was a mess.”

By discerning the specific strategies that failed, Tess and her fellow coaches have better understood what’s needed from them as coaches. All in all, Tess has found that coaching Macho Volleyball requires a lot more mental energy, and while coaching up to 24 guys can be hard, with their new plan and more patience, the seniors are planning on a win this year against the juniors.

Through experience and prior knowledge, the seniors have discovered a new strategy and game plan. Unfortunately for the juniors, they lack those two things, but regardless, the junior coaches have also developed good ideas for winning.

“Since it’s my peers, [coaching] will be different because, usually, my coaches are much older,” Ellie said. “Boys’ volleyball is much different than girls’, [and that] is going to make it different as well.”

Although they have a long ways to go until the game itself, the seniors have high hopes to crush the juniors with a good, strong team behind them.