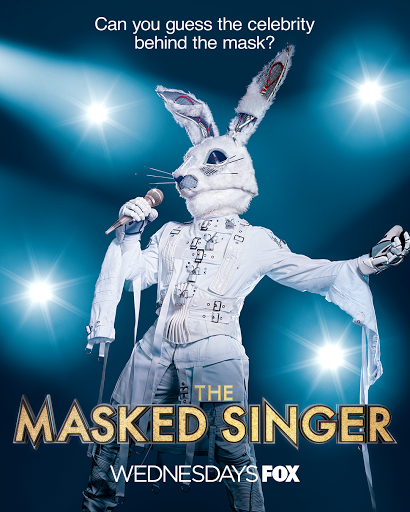 Beams of light flash across the stage and music begins to play, capturing the attention of the audience. A figure appears, dressed head to toe in a glittery costume of gold, blue, and green as a peacock. Microphone in hand, he begins to sing. The audience and panel of judges stare in bewilderment as they try to guess who is hiding behind the mask.

This is The Masked Singer, a reality tv show that has taken the Internet by storm. Its premiere episode had a viewership of seven million and was the week’s highest-rated broadcast. Anonymous celebrities compete in elaborate costumes, while the judges attempt to guess who they are based solely on their voice. At the end of the night, a single contestant is eliminated and forced to reveal themselves.

I was caught up in the plot from the first scene. After hearing about The Masked Singer repeatedly online, I decided to give it a try, and I was not disappointed. Throughout the entire episode, my mind was racing with a million questions and speculations as to who could be behind each mask. Now, four episodes later, I’m no closer to guessing who the mystery celebrities are; the show has successfully left me stumped.

An abundance of clues remains to be deciphered, as each episode reveals more information that often leaves me scrambling to come up with a new idea. Before each performance, contestants are introduced with a video that offers a few hints as to who the mystery celebrity is, but they often have double meanings. Each time a new celebrity is revealed, I am completely astounded. No matter how much I analyze each performance, I don’t think I’ll ever be able to guess who the owner of every voice is.

However, The Masked Singer is utterly fascinating to watch for reasons aside from the conundrum of who’s behind the mask. The performances are diverse and captivating, showcasing enormous amounts of talent. Not all of the contestants are professional singers, yet most of them blow the judges and audience away with their beautiful voices. Their costumes add to the alluring performances, and their dance moves are perfectly choreographed.

The notable panel of judges also enhances the quality of the unique television show. They consist of comedian Ken Jeong, activist Jenny McCarthy, singer Nicole Scherzinger, and singer-songwriter Robin Thicke. Their mixture of personalities is enjoyable to watch, and they take their job of discovering who’s behind the mask very seriously.

The Masked Singer has successfully captivated millions of viewers. Some may believe they have it all figured out, while others have given up even trying to guess. I, for one, will continue my futile efforts to determine the identity of each costumed character. I am eagerly awaiting the newest installment of The Masked Singer, ready to have my mind blown again.