Tidying Up with Marie Kondo reinforced my love for home organization 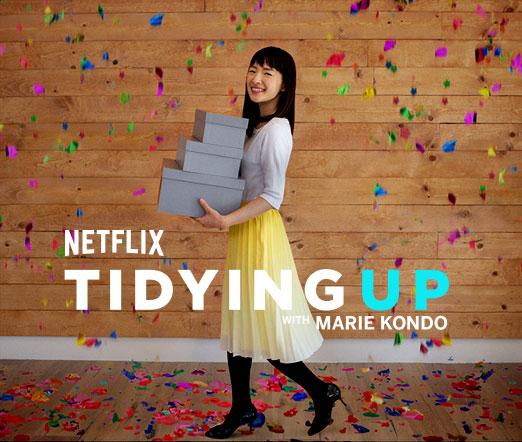 He who dies with the most toys wins, or so that’s what Malcolm Forbes often said.

However, contrary to what Forbes so firmly believed, Marie Kondo, a Japanese organizer who has recently taken to the limelight, has given her whole life toward proving him wrong. As the star of her new Netflix show, Tidying with Marie Kondo, released in 2019, Kondo uncovers the hidden blessings found in having less “stuff” in your house, all by leading by example and by showing the trifecta of kindness, humility, and patience to those she helps.

Kondo, an expert in organizational consulting, has made her life’s work teaching people the valuable, life-long skills of rearranging and prioritizing stuff they own, all while working her magic to heal the relational wounds people harbor. She teaches parents how to nurture a habit of tidiness in children and how to compromise with a spouse. She teaches people how to get rid of unnecessary “stuff” and how to respect what each item has gifted the owner. She teaches people a method for organization that she created (the KonMari), all while maintaining a perpetual posture of patience and humility in all she does. Every episode, while each features cosmically different people, always circles back to Kondo’s graceful demeanor and applicable advice for how to rearrange closets, among other things.

At the beginning of every episode, Kondo stands in the center of the screen where she highlights, in her native language, her main message, while also giving audiences a brief background of the people she’s helping in that episode. Then, it always cuts back to her approaching a house, daintily greeting and introducing them before diving deep into the messes hidden behind the perfect facades. Behind her unassuming slight frame and mild demeanor, the woman packs so much knowledge and love into each episode through soft smiles, brief words of encouragement, and hands-on teaching.

What actually struck me most about Kondo was not her pampering of her “customers” or even her overwhelming organizational impact on people’s homes; rather, it was her devotion and the care that she took with each family, each person, each home. In many of her episodes, there is a noticeable difference in the before and after pictures of the houses, especially when the places of improvement get featured. However, there’s never this scene where her improvement tips come to fruition to reveal a house that hardly resembles how it was before because the true magic and service Kondo bestows on people can be seen among the beaming faces of those inspired and impacted.

To me, I find it incredibly beautiful to see how deeply she impacts the hearts behind every home in spite of a clear language barrier. And although a language barrier often prevents her from being a quotable orator with inspirational words for those in need, her simple messages that are translated into English by her assistant are completely lucid in displaying her gentle spirit and her desire to heal broken homes.

As of recent, Netflix has been doing an incredible job featuring a wide variety of shows, often picking a diverse assortment of reality TV shows. Among the others in its genre, I think Tidying with Marie Kondo is a hidden treasure of Netflix, diverging from what most shows focus on and shedding new light on often ignored or tired topics.

Inspired by absolutely everything to do with her show, I immediately put my newfound knowledge to work by rearranging in my own house, utilizing her trademark technique for folding (KonMari). While I fell in love with her and her tips about organizing, a slight confusion I did have was that her supposedly “unique” folding style is simply just rolling clothes, which is something people have been doing for ages, thus making it not as profound and note-worthy as I had initially supposed it to be.

In all honesty, while her organizational skills and techniques are pretty terrific, I think that it’s really her encouragement and the love she lavishes on everyone she encounters that make her work matter most.