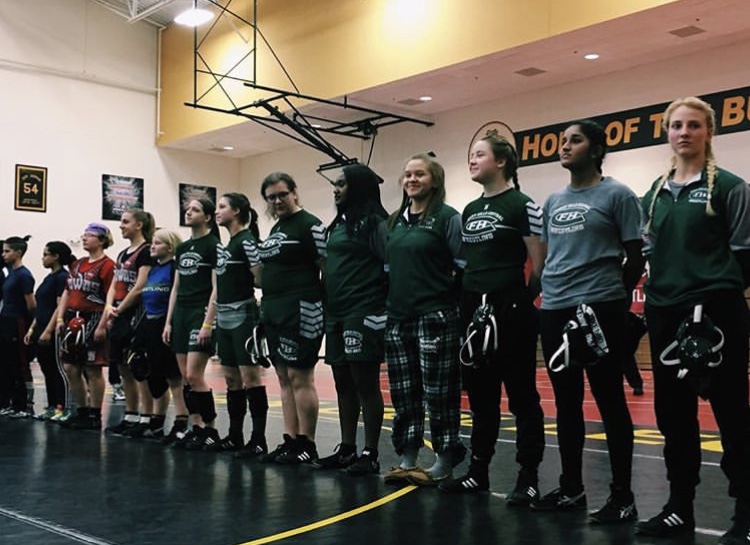 Junior Sarah Schenck pinned three straight opponents en route to the finals of the 125 lbs weight class. Despite losing in the championship round, she still earned the runner-up medal; more importantly, she became the first girl at FHC to ever wrestle in the finals of the State Championship Tournament.

With this being the inaugural Michigan Girls Wrestling State Championship, Sarah and six other Lady Ranger wrestlers who competed have the honor of being the pioneers for girls wrestling at FHC.

Starting the day with a huge victory, senior Megan Stockenauer set the tone for the Rangers for the rest of the day. She beat her opponent with the support of her teammates cheering her on and the guidance and encouragement of the coaches all season long.

“I won my first match of the day, which was a huge adrenaline rush because the girl I was facing was probably better than me, but I caught her off guard,” Megan said. “It was just really cool because my whole team and all the coaches were there cheering me on.”

With this tournament serving as the culmination of season-long efforts, Megan felt that she was more than prepared to display her abilities on the big stage.

“I think the thing that helped the most was having such a dedicated coaching staff,” Megan said. “They supported us and helped us so much, not only that day but every day.”

Junior Shay Keaton was also one of the four girls to medal. She took fifth place in her weight class and made a huge impact cheering on the Schenck sisters, Sarah and sophomore Rachel.

Rachel came back from the State Tournament after winning a tough final match to secure a seventh-place medal. Her success was largely based on Shay and the rest of the team’s encouragement.

“We were all congratulating each other on competing and winning,” Rachel said, “and before each match we would all tell each other that whoever was wrestling would do great.”

As for the two sisters competing together in this event and all season, they were both ecstatic for the opportunity.

“It was just a fun experience to compete with Sarah in the first Michigan Girls Wrestling State Championship,” Rachel said. “I was just extremely happy and proud that she managed to get that far.”

This experience they shared together and all season brought them even closer together.

“I think we can bond over this for a while,” Sarah said. “I definitely wouldn’t have done as well if Rachel wasn’t on the team this year.”

Megan, who started the tournament with a huge win, was on the losing end of her match for sixth place; however, she ended up winning in dramatic fashion. Just as she was getting pinned, she bridged her opponent off her back, was able to reverse her opponent, and ultimately got the pin to earn a sixth-place medal.

Megan and the rest of the girl wrestlers were all first-year wrestlers, making this season interesting but fun.

“Going into my first and last season, I wasn’t expecting to place at States but just [wanted] to have fun, which I did as well,” Megan said. “It was an awesome experience and opportunity to be a Lady Ranger wrestler for a year.”

The success the FHC team had in its inaugural year was impressive, as the ladies had to learn the entire sport of wrestling in a single season.

“What made our girls unique is that our girls were battling against young ladies who had a lot more experience than them,” head coach Brad Anderson said. “All of our girls were first-year wrestlers, which made their trek to the State Finals all that more impressive, and they were very competitive.”

Even though senior Jayla Williams couldn’t wrestle in the State Tournament due to a concussion, she was one of the many girls who battled hard in practice and matches whenever she could. Along with the girls who medaled, senior Abeer Khan, senior Mackenzie Marthens, and junior Hannah Becker—who all competed in the State Championship Tournament—strived to be the best wrestlers they could be every day of the season.

“[The girls] were an inspiration to me and I think to everyone around them,” Anderson said. “As a first year wrestler, guy or girl, it’s very tough to step into the room and one make it through the practices and two make it through the competition cycle; they did both.”

While this was a huge day for FHC, it was an even bigger day for the state of Michigan. There were 165 girls competing from over 100 schools—each of them becoming the first girl or girls to wrestle for their school at the State Tournament and each helping high school girls wrestling take a huge step forward.

“It was just really cool to see all of these girls so passionate about a sport,” Megan said, “and I know this will be the first of many girls wrestling State Championships to come.”

As the season comes to a successful end, the first-ever girls wrestling team has paved the way and broken barriers for a future at FHC in the quickly-growing sport.

“They practiced hard, they were dedicated, they competed, they were very hungry for competition, and they asked great questions,” Anderson said. “They were really just ideal teammates and great learners; [for] the girls that are seniors, I wish them the best, and for the girls who are returning, I think we have something to build on.”