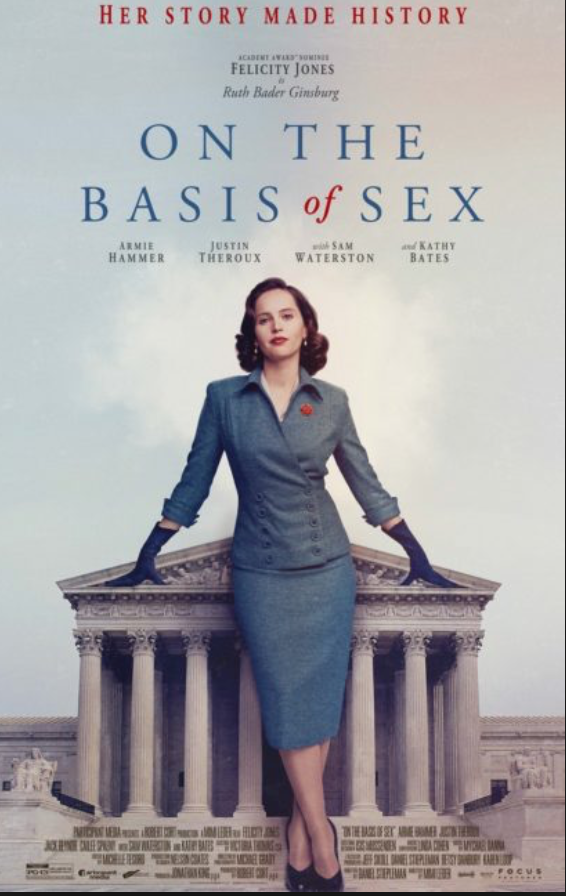 Every middle school graduate has some basic knowledge of women’s fight for equal rights. Most of the time, this knowledge includes the Seneca Falls Conventions and some important figures from the 1800’s such as Lucretia Mott, Elizabeth Cady Stanton, and Susan B. Anthony. Textbook American history, at least in my experience, tends to glaze over the relative recentness of the destruction of gender-based discrimination. Thanks to the surprisingly accurate and captivating film On the Basis of Sex, Ruth Bader Ginsburg’s remarkable life and accomplishments as a part the equal rights fight are finally receiving the acknowledgment they deserve.

The movie follows Ginsburg’s life from the time she is attending Harvard all the way until after she argues the court case Moritz v. Commissioner of Internal Revenue. The audience is granted a view into her personal life with her kids and husband as well as the treatment of women in that time period. Mainly focused on her fight to make an impact on the world, the film shows Ginsburg’s motivation and determination to defy what is expected of her.

I loved the pace of the movie. Not everyone is a lawyer, and not everyone will understand the legal terms and processes. On the Basis of Sex broke down the complexities of law to a level more understandable for the entire audience. Because of this, the movie did not become painstakingly slow; there was a nice balance.

The accuracy of On the Basis of Sex hit me like a brick to my face. Yes, there were dramatized Hollywood parts; however, the facts and character portrayals are truthful and authentic. As told in the film, Ginsburg was actually one of nine women at Harvard. She did take care of a baby, her classes, and her husband’s school work when he fell ill. Ginsburg and her husband did work together on the Moritz v. Commissioner of Internal Revenue to make way for Reed v. Reed, which Ginsburg also worked on.

Furthermore, my favorite scene in the movie was a true event. While at Harvard, the Dean hosted a dinner party for the women and asked them why they were occupying a slot at the school instead of a man. After observing the Dean’s disapproval at some of the other women’s answers, Ginsburg comically answers that she is attending to better understand her husband and his work.

This episode expertly encaptured the essence of Ginsburg’s spirit. While this occurs towards the start of the movie, Ginsburg’s character does undergo a fair amount of character development. In the beginning, she challenges her role as a woman passively. Her turning point was taking the Moritz v. Commissioner of Internal Revenue case. From then on, Ginsburg took action. She challenged the role of all women by taking on an unfair law.

Throughout On the Basis of Sex, Ginsburg’s husband, Marty, was the most unexpected character. He was a gem in a pile of ugly rocks. If all men were like Marty, then gender-based discrimination wouldn’t have existed. Marty was as ready to support to Ginsburg as she was to him. They had a beautiful relationship full of mutual respect, equality, and love.

I also loved the role Ginsburg’s daughter, Jane, played in the movie. Jane was an activist. She pushed her mom to make a difference and succeeded. In one scene, the two are standing in the rain in the city. Some men are catcalling, so Jane turns and gives them a piece of her mind before hailing a cab. This scene was powerful because that was not the “proper” role of women at that time. It makes the audience and Ginsburg in the movie take a step back and look at how things are changing.

I don’t think I have ever watched such an empowering movie. Ginsburg is an icon for female independence without stepping into radical territory. I admire so much about her, and I never would have known most of the story had I not watched On the Basis of Sex. Even for those who are not history nerds, this movie a must-see.