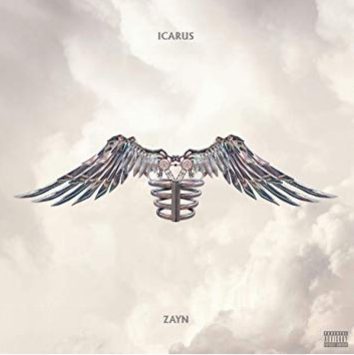 After departing from the British boy-band One Direction, Zayn Malik has released his second album Icarus Falls. As the album rolls through its 27 tracks, a few songs may cause you to experience deja vu, but deeper within the lyrics lies a hidden message that holds the album together.

For many years, Zayn was one-fifth of the beloved band of boys, One Direction. After being thrown together by Simon Cowell, the band’s popularity grew exponentially as new songs were released. But the band was not meant to be together forever; in 2015, Zayn was the first to flee from the group and jump-start his solo career in music. His first solo album, Mind of Mine, was released in 2016 and followed the modern R&B trend. The music was adored by the devastated One Direction fans, and Zayn’s popularity as a solo musician soared.

Recently, Zayn has released his sophomore album Icarus Falls, and it is the perfect mix of slower R&B along with a few hints of modern pop. With appearances from artists including Nicki Minaj and Timbaland, Zayn’s album holds many messages within its well-structured lyrics.

Zayn decided to name his second album after the Myth of Icarus, the Greek myth in which the rebellious Icarus flew too close to the sun after many warnings and wound up falling to his death. This story seems to parallel Zayn and his previous fame with One Direction. He was once an outgoing and excitable popstar, but after his departure from the group, Zayn experienced a hiatus from the music industry but has come back with music that lets his fans see a glimpse of his often hidden lifestyle.

Split in half by “Icarus Interlude,” Zayn’s album proves his desire to be seen as a serious music artist. As the album opens with the track “Let Me,” Zayn expresses his romanticism and love through the lyrics of the first half of his album. Whether these songs are love letters to his on/off girlfriend or simply thoughts flying through his mind, the painful love life that Zayn has experienced can be heard through the lines of fan favorites including “Back to Life” and “Tonight.”

As the album rolls through its tracks, the mellow and calming tone generates the perfect album to sing to during an early morning or late night alone. As meaningful words, including “Just let me talk, you know what I’m saying. Don’t give me that, girl I know you’re staying,” pour from Zayn’s voice, his fans find themselves relating to the deep, powerful words in each one of his songs. Whether it be in the romantic and love-filled beginning of the album or within the expressive and powerful ending, fans are in love with the new music Zayn is producing.

As Zayn transitions from songs about his quiet love life, he sings about the greatest challenge he has ever faced: himself.

In one of my personal favorites “There You Are,” Zayn’s voice beautifully sings “Need you when I’m well, when I’m sick. Friends that I rely on don’t come through. They run like the river, but not you.” This song, as well as many others, expresses Zayn’s need for support and love, but he often feels as if he is not enough for himself. In the album’s 17th track “Satisfaction,” Zayn also expresses his desire for love and happiness, but he feels he is always holding himself down with the weight of one thousand pounds.

Although the new Zayn Malik is shockingly opposite from the former One Direction star, Zayn’s new albums are adored by nearly everyone. The soothing R&B is the perfect match for his unique, heavy vocals, and the seemingly long album is enough to finally provide listeners a look inside of his new, private lifestyle.