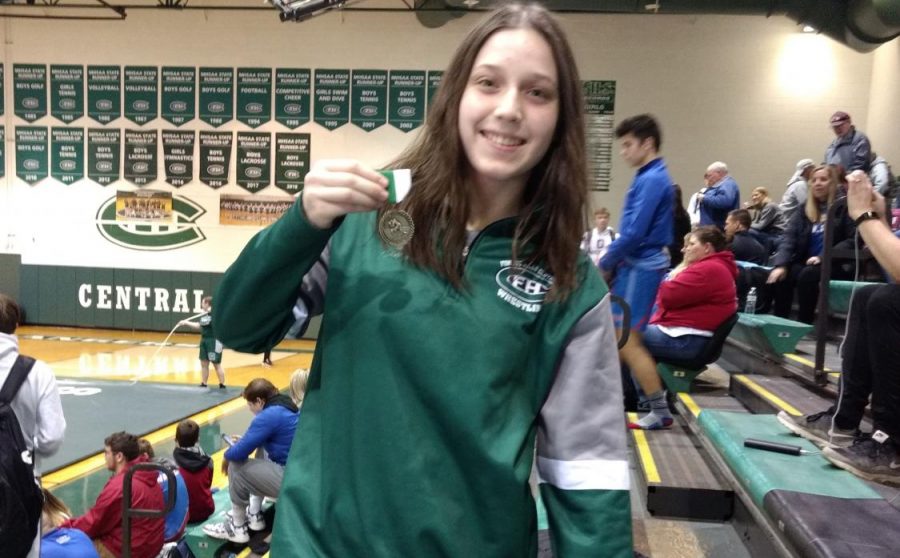 With three varsity sports and an undeniably difficult schedule, it’s easy for junior Sarah Schenck to have moments of longing for a simpler life.

“Sometimes it’s kind of hard,” Sarah said. “Sometimes I just want free time and want to go read and do my own thing; but I have to go to practice.”

But for the most part, however, Sarah relishes in the experience her involvements afford her.

“I like being a part of different things and meeting all the new people,” Sarah said. “Sometimes it’s hard being busy, and sometimes I wish I just had nothing to do. But I like the experiences I get by being so busy.”

Sarah’s academic year begins with a headstart in the summer, as her first season commences with FHC’s swim team. Swimming has been a part of Sarah’s life from her earliest years, but the FHC team holds a special place in her swim career.

“A big part, at least the high school swimming, for me is the people because they’re all super nice,” Sarah said. “It’s been really good. I’ve had two different coaches, and they’re both really nice. I’ve always had really nice coaches, so that’s probably what’s kept me going.”

Not only has Sarah found support and guidance in her swim coaches over the years but also in her fellow team members.

“The girls on the team have taught me a lot just as I was going from being a freshman to an upperclassman,” Sarah said. “They’ve taught me what to do and stuff. For me, [swimming’s] never been really hard, but when I started high school, a lot of the practices were tougher. It was mentally difficult sometimes, [and] so that [guidance] helped me get through it.”

Yet, even despite the particularly grueling season, Sarah’s fanaticism for swimming has persisted through her three high school seasons. With that guidance and passion, Sarah has been able to find success, making states this past year.

Sarah’s commitment to swimming also led her to her second sport—water polo—which she first joined in middle school.

“I knew a lot of people that were doing [water polo] because I also swim for a club,” Sarah said, “and I heard that it was all three schools, which seemed like a good opportunity to be on a team with girls from other schools.”

Water polo consumes Sarah’s spring season, but it has proven to be another sport Sarah genuinely enjoys.

“I think water polo’s probably my favorite because it’s the most fun to play,” Sarah said.

Moreover, the team itself is another special group to Sarah, especially because the water polo team consists of all three FH schools.

“That team is awesome,” Sarah said. “We aren’t the best team— we’re not like number one, undefeated—but the girls are all really nice. [With] the three different schools, it’s really fun to get together and do that. At all the tournaments, we can just sit around, talk, and play, and it’s really fun.”

Sarah has certainly found support and friendship in both teams of her water sports, and the same can be said for her third sport, one that she only just joined this year— because it hasn’t been available until this year.

“The team was really nice,” Sarah said. “I got closer with all the girls who did it definitely especially because it was such a small group of girls who did it. There were only eight of us.”

Marking FHC history, this is the first ever year FHC has had a girls wrestling team, and Sarah got to be directly involved in this monumental development.

“I wasn’t really sure what to expect, and I mostly did it because my sister was like, ‘Hey I want to try this,’ and I was like, ‘Okay, I’ll do it with you,’ ” Sarah said. “It’s the first time I’ve done a contact sport, so it was just really different from anything I’ve done before.”

The experience was as new to Sarah as it was to FHC. And especially with her aquatic background, Sarah was unfamiliar with the nature of the sport itself.

Furthermore, the significance of the team contrasted her previous athletic experiences. While Sarah saw wrestling simply as another sport, much of the rest of the school had varying reactions to its addition to FHC athletics.

“I didn’t think about [the significance] that much, but when people would come up to me and be like, ‘I’m glad you’re doing this,’ it was definitely a change,” Sarah said. “None of the other sports get [that response]. For me, it was just, ‘I’m doing a sport and maybe I’ve never done it before, but it’s just a sport like any other.’ But it was definitely big to other people which made it a lot different for me.”

Nevertheless, despite all the newness, Sarah adapted flexibly to the first-time endeavor.

“It was exciting to try something new,” Sarah said. “It was also kind of scary because I’d never done that before, and I didn’t know how it would go. It ended up turning out pretty good.”

Sarah and the rest of the team made even more history when they recently wrestled at Michigan’s first ever girls wrestling state competition. There, Sarah placed an impressive second in her weight category.

“It felt really good,” Sarah said. “It was also a shock because some of those girls have been wrestling for a really long time. Some of them were really good so some of the matches were a lot harder than I thought they were going to be. The fact that I got second was kind of surprising. I was just looking at the brackets, and I was like, ‘Hey wait, I’m in the finals?’ So it was really strange, but it was good.”

“Sometimes I appreciate the difficulty,” Sarah said. “Sometimes, it’s a lot of homework, but a lot of times it just feels like a normal class. I just like taking all the different classes.”

With her academics and athletics, Sarah has to resign herself to a disciplined schedule, and little time is left for much else. Regardless, Sarah cherishes all her varying ventures, excited and eager for what’s left to come both in high school and life.

“I’m learning lots of new things, gaining new experiences, and I know I’m going to be busy when I’m older,” Sarah said, “so, might as well learn coping techniques and strategies now.”