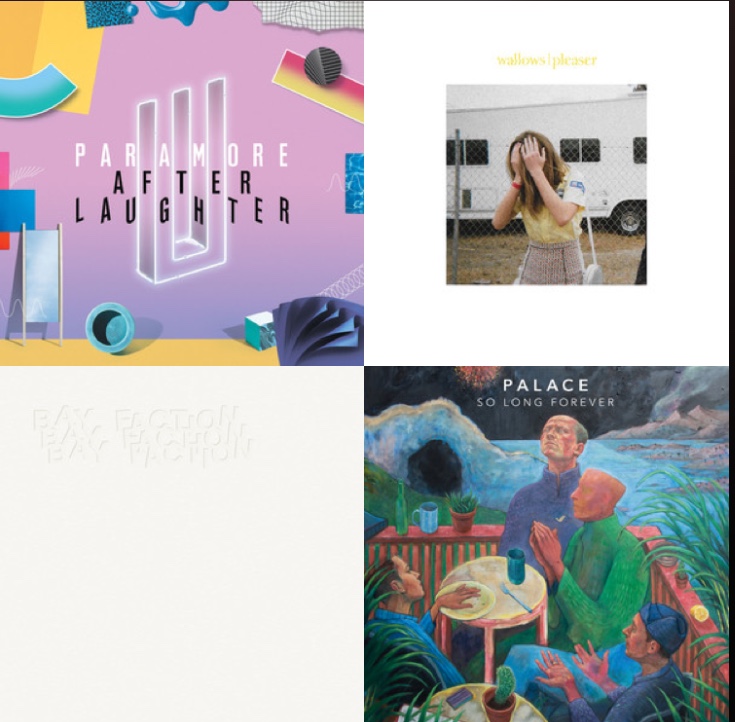 For this week’s review, I compiled a list of four bands I’ve been digging this past month and discussed my all-time favorite songs: what they remind me of, how they make me feel, and why I love them so much.

Hit single “Hard Times” from Paramore’s 2017 album, After Laughter, has always been the song that I listen to when I’m in an inexplicable funk. Its playful pop sound, comprised of funky guitar licks and marimba beats, pulls the inexplicable melancholy out of my bones in a matter of minutes. This song will forever and always be my cure for waking up on the wrong side of the bed, and it never occurred to me that nearly every song from the album it came from could offer the same remedy.

Nearly a week ago, on a particularly gloomy day, I randomly put After Laughter on shuffle. I quickly realized that for three years, there were 12 cures for being bummed out locked in the medicine cabinet, and only just then was I finally unlocking the stored remedies.

“Rose-Colored Boy,” sitting right under “Hard Times,” opens with a similar funky beat and rhythmic chanting— two elements of a song that make it absolutely impossible not to bob your head to or tap your foot. I’m in love with the lyrics, with its danceable tune, and with the overall vibe of this song. “Told You So,” directly below “Rose-Colored Boy,” is the final song in the trifecta of the ultimate cures for the inexplicable melancholy—a holy trinity, if you will.

After Laughter is my favorite melancholy remedy, and I’m glad that I decided to randomly put it on shuffle that one day.

Moving on from Paramore, I became hooked on a lesser-known band, Bay Faction, from my Discover Weekly a few weeks ago. This band isn’t my go-to for danceable, funky tunes like Paramore— it’s the exact opposite, really. I turn to Bay Faction’s singles for when my Doc Martens and I are strolling through the city, for when the sky is the opposite of clear blue, and for when I want to lightly nod my head to simple guitar strums that have huge garage-band vibes.

“Sasquatch .22” screamed Teen Angst, which also occasionally floods my bones, but in a mellow way— it screamed softly. Simple, yet heavy, guitar strokes accompanied by randomly rhythmic bass kicks had “angst” subtly scrawled amongst the weird lyrics. I don’t know what I love so much about this song—the masterfully crafted beats, politely punch-you-in-the-face guitar, or the downright weird lyrics—but I’ve come to the conclusion that for some songs, a why isn’t necessary.

So, after hearing the beautifully weird song that is “Sasquatch .22,” I listened to every single song produced by Bay Faction; I spent hours learning the ins and outs of these obscure songs from an equally obscure band.

And, from those hours of listening, I added three songs to my playlist that I listen to on my particularly angsty days.

“Are You In The Mood?” transports me to the basement of a grimy restaurant in the city— I’ve never actually been in one, but listening to this song is close enough. I can’t tell if this is the perfect song to listen to in said basement, or if the song is said basement—maybe a little bit of both. The brooding bass and deep, dark vocals in this song capture the garage-band vibes of Bay Faction perfectly. Simply put, I love this song.

“Donor” has similar elements as the last song: gruff vocals, heavy guitar, and sounds like a basement song. But, this song moves a little more; the tempo is faster, and the beat takes the song by the hand and runs, without looking back. Mellow head-nodding is not fit for this song, which makes it the odd one out of my favorite three. But, then again, every single song by Bay Faction is an odd one out, so who am I to judge?

The title of the last song that I absolutely love by Bay Faction just proves the pure oddness of this band: “Cameras in the Home.” Two characteristics that pretty much every Bay Faction song have in common are odd lyrics and an odd beat, and this song is no exception. Strikingly similar to the very first song I heard by Bay Faction, I feel that any explanation for why I love this song will only kill the wonderfully weird sound of it. “Cameras in the Home” is weird, and that’s exactly why I love it— and Bay Faction.

I’ve come across a common theme as I’ve been listening to these bands as I write about them: guitar-heavy funkiness.

I don’t know how Wallows can sound both indie-pop and indie-rock in the same song, but they do, and I love it.

“Sun Tan” is on the more Bay Faction side of songs; the in-your-face guitar intro pulled me into this song immediately, and that attention didn’t fade throughout the 3-minute song. The vocals are blurred lines— the kind of lyrics that you don’t really sing along to, you just sit and nod your head and hum the pitch. To interrupt the pattern of basement-sounding guitars I had fallen into by the time I listened to Wallows, a smooth, almost jazzy, horn line suddenly started in the middle of this song. That, paired with the muffled guitar, totally took me by surprise; it was when the trumpets melodically mixed with the beach-sounding guitar that I added this song to my playlist.

“Pleaser” had some Paramore undertones, but this song was the first one where I recognized and registered the lyrics. Listening to all these songs, I paid close attention to the beat or the vibe or whether or not it sounded like a basement, and paying such special attention to these elements left the lyrics in the dust.

“Pleaser” cleared away the dust and revealed masterfully crafted and artful lyrics, only deepening my newfound affinity for this band.

From the cover artwork of So Long Forever, the album I’ve had on repeat the past month, to the poetic lyrics, to the groovy guitar sounds, Palace is the embodiment of art.

“Live Well” was the first song I heard by Palace, and it was a song that I actually put on repeat because I loved it so much. The first 20 seconds of the song belong on a summer drive to the beach: sand in your hair, blue-tinted world from your sunglasses, and your arm resting out of the window. Listening to this song during a Polar Vortex seems wrong— it belongs in the summer, and I can’t wait to listen to it under the sun.

“So Long Forever” is an artful masterpiece. I’ve listened to this song probably a dozen times, and with each listen, I discover new corners of the painting that is this song. The lyrics paint pictures of dissipating waves that foam, wind that tousles sun-streaked hair, the perfect shade of green, and worn-out converse running across gravel and sand and roads.

“Bitter” is the song that reinforced the lyrical mastery that Palace is capable of. More a poem than a painting, this song is scrawled lyrics on the back of envelopes, napkins, or the margins of newspapers. This song is annotated sentences, highlighted words, underlined phrases.

I don’t know how Palace does it, but they create music, poetry, and paintings within each and every one of their songs. Maybe that’s why I love them so much— they are all of my favorite art forms combined into one.