Beloved: The book that makes you question your morals 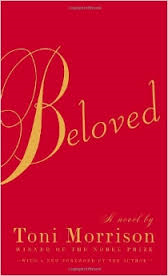 At 7 pm, I made my way to Barnes and Noble to pick up a book for AP Lit.

When I handed the little red-bound book to the curly haired clerk, she looked at the title before looking up to examine my face. She looked me up and down, as if examining me to see if I could handle it- if my eyes were dark and strong enough to handle the fine print within the novel. Suddenly, as if reaching her conclusion, as if finally deciding I could take it… she placed the book into a bag and simply replied, “This book is hard to read.”

And after finishing the novel, I now understand what she meant. Not hard as if the book was brimming with archaic language and convoluted symbols that required careful dissection in order to understand each winding sentence, but hard as in the book makes you question your morals. It makes you ask yourself the question of “Is murder wrong?” Before you read the novel, you seem to have a clear answer: Yes. However, after reading it, you become understanding. You begin to wonder if maybe murder isn’t always wrong.

The novel is also hard to read in the sense that it’s haunting. Literally. Sethe is an escaped slave who ran to Ohio in order to escape from her horrendous past and the memories that seem to weigh her down. She flees from not only the past, but past choices she has made, tree branches that seem to grow on her back and memories of other escaped slaves, and the plantation that she ran from. The new home that she runs to for a fresh start is no longer a safe house, but instead a home for a vengeful ghost who wants revenge. That ghost being Sethe’s baby, who died with a name we as readers never get to learn, and whose tombstone is engraved with a single word: Beloved.

From the story, you come to understand that Beloved is so much more than a vengeful ghost of a two year old who throws dinner plates at the floor and shakes the panels in the house to make her presence known. She becomes the physical manifestation of a baby who was killed by her own mother in an attempt to save her. In an attempt to rescue her from a lifetime of being compared to as less than the cattle that grazes upon the land and a lifetime of being convinced they don’t matter. Beloved was killed because Sethe believed her being dead would be better for her than a life in the institution of slavery. Beloved is presented as an allegorical figure. Whether she is Sethe’s daughter, Sethe’s mother, or a representative of all of slavery’s victims, Beloved represents the past returned to haunt the present.

Beloved is unique in that way that Morrison is able to play with narrative voice and entwine multiple perspectives throughout the novel. By jumping from third-person omniscient to third-person limited, Morrison lets the readers in on a secret: in order to fully understand the novel, you have to put in work. The sudden shifts in voices resemble Morrison as she gives a half-smirk to the readers, letting them known in a nonverbal way that there is definitely more to the story than ghosts and murders. She lets the readers know Beloved is more than just a ghost story you sit down and tell your friends under the glow of a flashlight at 4 A.M. during a sleepover. The varying narrative voices brimming in the novel allows Morrison to weave herself in and out of the minds and stories of her characters and allows us to get to know our characters and the convoluted backstories of seemingly minor characters such as Ella and Lady Jones.

Beloved is also haunting beyond in terms of the literal context, but haunting in the way that it immerses the readers into the horrifying and grotesque world revolving around the institution of slavery. One where men were chained together and where little boys were hung from the branches of trees. What I enjoy most about the novel is its brutal honesty… its ability to address the daunting past without shying away from the “Sixty Million” that were rendered nameless and murdered in the face of slavery and its ability to address the chains that were shackled around the wrists and feet of the men.