Fisher: A One of a Kind Teacher 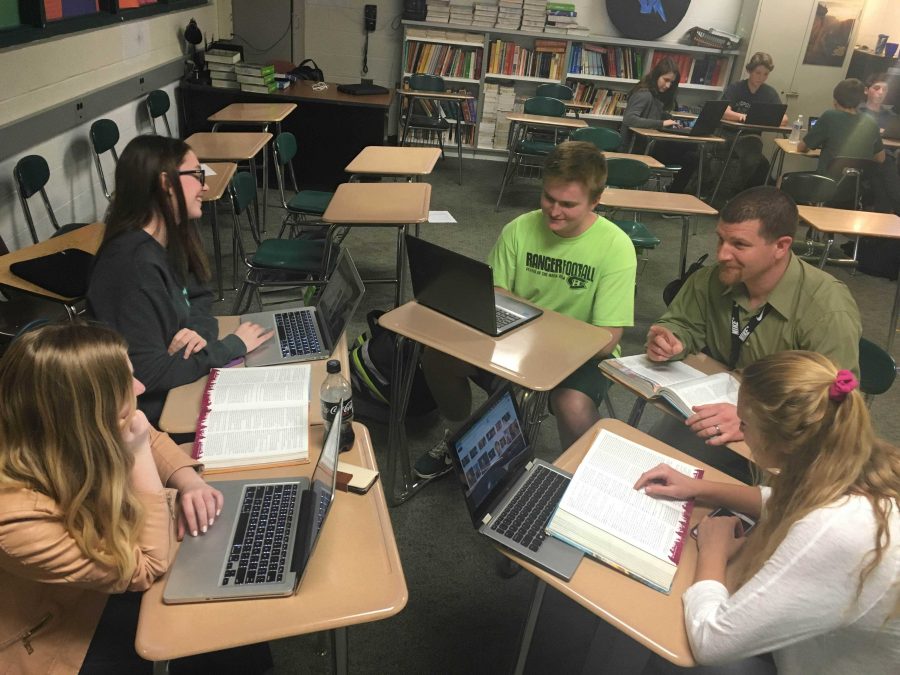 Music can be heard in the hallways, radiating off the walls, bouncing from room to room. Students are laughing and conversing. Happiness gleans through his eyes as he sighs in contentment. He smiles ear to ear at the sight that fills his class.

Students are everywhere creating a ruckus. His smile seems glued onto his face, never seeming to slip or fade away. This is what he looked forward to every day.

English teacher Jon Fisher takes pride in being able to create an inviting, welcoming classroom for his students.  His co-workers recognize and appreciate his friendly approach.

“The feeling that when they go into his room, [students] are welcomed [and are] very comfortable there,” said English teacher Kris Schrotenboer who is the English Department co-chair with Fisher.

He plays music in between classes, and once class begins it starts with casual conversations with the students about their personal lives, then dives deep down into the lesson plan for the day. Fisher works hard to connect with and motivate his students.

“I think people like my class because I’m kinda of a goofball and I like to crack jokes,” Fisher said. “Some people like that especially if they don’t like the subject.  A least it’s more interesting [and] I can, at least, try to make it entertaining.”

Students flock to Fisher’s classroom , so he has full classes every hour.

“I think the students might like me a little too much,” Fisher joked. “My classes are way too full; some of them need to go away.”

Laura Stiles, a history teacher, has known Fisher for about three years and notes Fisher’s energy as a difference maker.

“He’s a good guy, [he] has lots of good energy,” Stiles said. “I think that a really good way to describe him [is] positive energy. He’s got a good attitude, and he genuinely wants kids to do a good job and have a good time in his classroom.”

“He was very young and interesting when I first met him,” she said . “He had [lots of ] promise as a young teacher so that was exciting because we always want to see good young teachers. I think that he is very interested in the students, that he truly cares about the well-being of his students. He invests a lot of time in getting to know his students and tries to create a great personal relationship with his students. It’s this personal relationship that he is willing to have with his students that really make an impact on his students.”
Fisher didn’t initially plan to teach. But after spending years in college studying the wrong major, he realized that he was meant to become what he had tried all his life to ignore.

“My dad was an educator, a high school teacher, then he was a counselor,” he said.  “My mom was a librarian, so my family worked at the same school I went to. Seeing them as educators convinced me that I did not want to become a teacher. So I went to college and spent useless years studying computer science. Then, eventually, I came to the realization that I should be a teacher because computers suck and people are way more interesting. I fought against it but I was meant to be a teacher.”

Fisher’s family may have influenced him to become a teacher, however, Jeff Gallup, his tenth-grade history teacher, had the most impact upon Fisher.

“He was an awesome teacher,” Fisher remembered. “He taught history which I didn’t really particularly care for but he made it some much fun. He was always goofing around, cracking jokes, being stupid. Even today, I’ll look back at the way he acted in class, and how I have pretty much modeled myself after him. I’m glad I had him as a teacher because that really showed me what a good teacher can be.”

Not only is Fisher a teacher, but he is also one of one of the  advisors of the Gay-Straight Alliance (GSA). He started one at Godwin Heights, a population that often struggled with acceptance.

“I wanted to help out, so I got involved,” said Fisher. “I had some friends who were homosexual growing up and my brother in law is flamboyantly gay, very gay. He’s one of the most amazing people I know and so I got invested in the community. I think that it’s made people realize I’m not a very judgmental person. Like if I don’t judge ‘those people’ then there are very few people who I would pass judgment on. I don’t really care whether you’re a super liberal or a conservative as long as you are a good person. Tolerance is all I really care about.”

So much care and hope drive Fisher to set an example for his students to become positive and tolerant adults.

“I am hoping that they take away some of the academics with them,” said Fisher. “But really on a more personal level, I hope they enjoy their time in class and learn from my example of being a tolerant person. Hopefully, they’ll go out into the world and be  tolerant people. There is always going to be positive and negative in your life. Every day is going to be some good stuff and bad. I usually try to look at the good stuff and not focus on the bad. I hope they see my positivity and tolerance and some of that rubs off on them.”