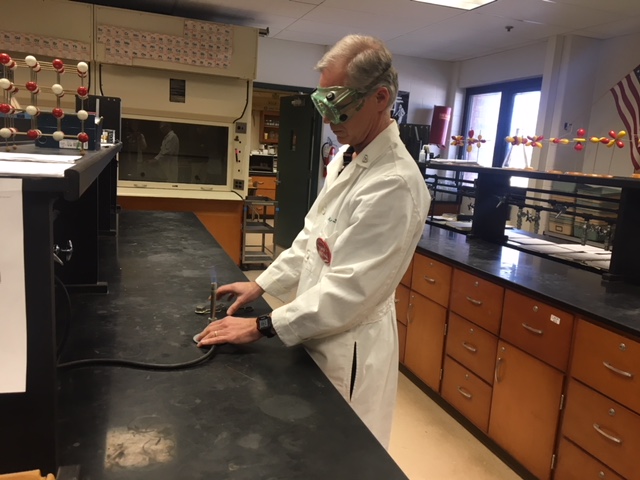 Twenty minutes in the car, two hours at a desk, and twenty more minutes in the car only to spend more time at a desk. Driving from FHE to FHC and back to FHE for the rest of the day. Three students endure this hectic schedule every school morning in order to take an AP Chemistry class, one of them being FHE junior Praneet Gundepudi.

With not having enough students for the class to run at FHE, coming to FHC was his only option. However, he is not that upset about it.

“It’s more of a hassle to get here to take the class, but I knew that I wanted to do it here,” Praneet said.

After being in the class for a while, Praneet does not regret his decision to take AP Chemistry at FHC; chemistry teacher David VonEhr is partly responsible.

“It’s a great class,” Praneet said. “Honestly, Mr. VonEhr is probably one of the best teachers I’ve had, and he is a great person.” 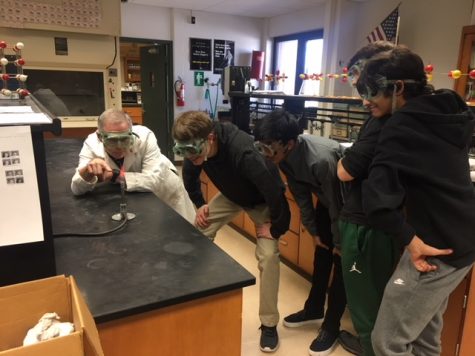 VonEhr’s personality translates to his class and teaching style. As a result, Praneet truly enjoys the class and the atmosphere VonEhr has developed.

“It’s a really tough class, but the environment, in addition of it being tough, [is] a really chill class, and he just teaches really well,” Praneet said. “It’s been great so far.”

Not only is he learning new information about chemistry, but he’s also developing a plethora of life skills. He is learning to be more adaptable by going to a new school. He may know a few people and have two other FHE students with him, but it is still new.

Attending a new school is definitely tough and comes with many challenges. That was not the first issue Praneet came across though. Scheduling for an entire school is so challenging that FHE didn’t know they would not be offering AP Chemistry until the end of the summer. It was as much of a surprise to Praneet as it was VonEhr.

“When I got my list of students, that’s when I found out [that I had students from FHE],” VonEhr said. “It was kind of a surprise. Not bad, just a surprise.”

This is not the first time students have come to FHC from other schools in the district. VonEhr has shared his lab with a class from FHN, which at the time was under construction. He had fun and is glad to be doing something similar.

Since the students go to two different schools, they occasionally have to leave early or arrive late. This particularly happens when the weather is bad. However, they are keeping their grades up and dealing with the missing class time well.

It is truly incredible that the three FHE students are keeping up with the workload. If chemistry isn’t demanding enough as is, adding the “AP” factor surely amps up the stress levels. Junior Gaurang Vaidya does not deny that it is a strenuous class.

“Chemistry is a difficult subject to master because it seems abstract while studying mole and the atom, but real while engaging in experiments and labs,” Gaurang said.

The good grades are not only because the FHE students are working hard though. Without a teacher as incredible as VonEhr, the class could prove to be even more arduous.

“Mr. VonEhr is an amazing, motivated teacher who not only cares for his students but allows leeway in his schedule to push things back occasionally,” Gaurang said.

Along with VonEhr, the people at FHC have helped make Gaurang’s transition here easier. He has met many new people, making the twenty minute drive worth it.

“My experience at Central has been phenomenal and I would definitely consider enrolling here if I was a new student,” Gaurang said.