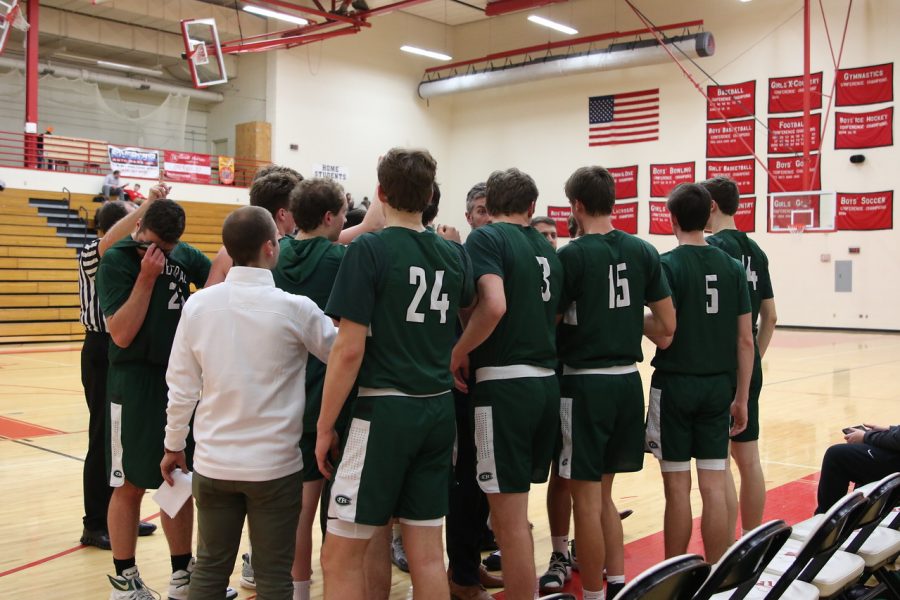 Senior Tate Hallock continued his run of great games with a doule-double to help lead the boys varsity basketball team to a 62-46 win in their regular-season finale at Cedar Springs. The senior forward had season-highs in three categories, as he scored 18 points, grabbed 13 rebounds, dished out 6 assists, and had a steal.

The Rangers got out to a hot start, and a beautiful drive and dish by Tate to fellow senior forward Jake Ball for the easy bucket forced a Red Hawk timeout. Tate along with junior point guard Jimmy Scholler continued the trend of FHC players getting into foul trouble early on. Five minutes into the game, both had picked up their second fouls and forced head coach Kyle Carhart to go to the bench. Senior guard Josh Wise got off to a fast start, hitting two three-pointers in the quarter, and the Rangers led 20-11 after one.

Senior forward Dan Deindorfer really got going in the second quarter. He scored 5 of his 10 points in the quarter but was much more impactful on the defensive end. He grabbed 5 rebounds and blocked 3 shots, leading to the Rangers being able to get out and score in transition. With just under two minutes remaining, however, Jimmy picked up his third foul and was forced to sit on the bench for the remainder of the half.

The Red Hawks were able to get the Rangers’ lead down to 5 points at 26-21, but that’s as close as they’d come for the rest of the night. FHC was able to end the half on a 7-0 run, capped off by a three from junior guard Mitch Wilkinson to bring any momentum Cedar Springs had to a halt; the Rangers led 33-21 at the break.

The third quarter was a very sloppy one from both teams, as they combined for just 17 points on five made field goals.  The whistles weren’t friends of the Rangers in the quarter, as they were whistled for seven fouls compared to the Red Hawks’ one. FHC still led 41-30 after three.

The fourth quarter was dominated by Tate. He scored just 4 points, but he had 7 rebounds and dished out 3 assists. Jimmy had 4 assists in the quarter, giving him 130 on the season and a tie for the record of assists in a season. The Rangers outscored the Red Hawks by 5 in the final quarter, sealing the 62-46 victory.

With the win, the Rangers cap off the regular season with a 12-7 record and a 7-5 record in OK White conference play. The Rangers drew the bye for the District tournament and will play the winner of the game between Rockford and Forest Hills Northern on Wednesday at Greenville.