Varsity B wrestling has an overall successful year individually and collectively 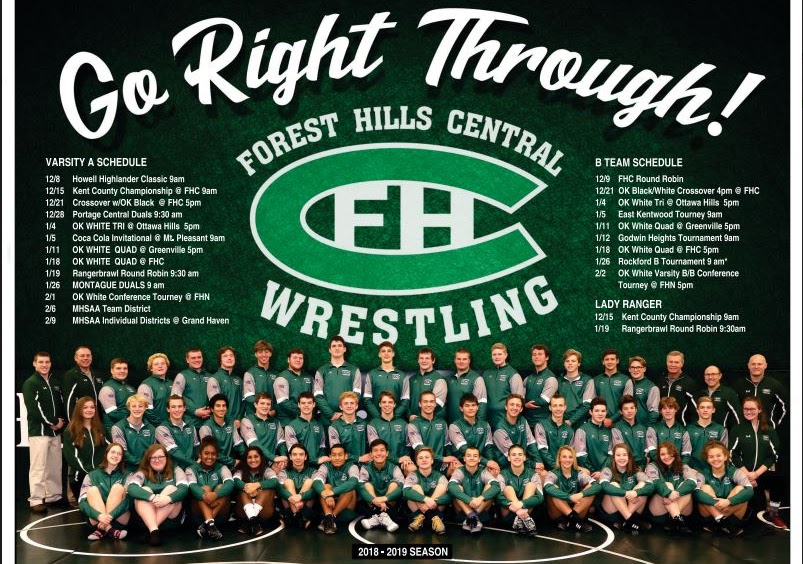 The varsity B wrestling team wrestled well individually and as a team due to the comradery among each of the wrestlers. It started the season with a successful tournament and ended the season the same way.

Along the way, the only problem the Rangers faced was an extremely solid Lowell team, but the Rangers bounced back, supported each other, and felt like they would have been a threat at the conference tournament—which was canceled due to weather.

Entering the season, the Rangers knew they needed to be close as a team and work hard in practice every day to make up for the team’s inexperience.

“The hardest part of the season was competing against older wrestlers,” sophomore Mason Wiltz said. “We had to overcome the odds because we were so young this year.”

Starting the season with individual round robins was a perfect way to ease into the older competition. Sophomores Will Brown, Bryce Hysong, and Cam Roth all placed first in their brackets, and many others placed second. The Rangers used this momentum and the closeness as a team to roll over its competition for the next few meets.

“I think starting the season off well was a huge part of our success,” sophomore Mason Myers said. “This made the season fun and helped us a lot.”

The varsity B team would go on to destroy Mona Shores 27-3, beat rival Forest Hills Northern, and have a few wrestlers place in the Kentwood Invitational.

“The reason we won against those teams was due to how hard we practiced every day,” freshman Will Richardson said. “Practices were definitely the best part of the season; how spirited and together we were was also really cool to be a part of.”

“Wrestling is a tough sport, maybe the toughest,” head coach Brad Anderson said. “Having comradery, like we did, helps in tough practices when you’re on the road, and when you’re at a long tournament just to take some pressure off.”

The Rangers needed to be tough and together against its next opponent, the Lowell Red Arrows—a team known for being a successful wrestling team year in and year out. The Rangers started out slow and could never fully come back; it lost to Lowell 45-27. Although the team lost, four Rangers, sophomore Jhett Gavle, juniors Brandon Weiskopf and Cole Kaminski, and freshman Evan Elzinga, pinned their opponents.

“Evan Elzinga had a great match against Lowell and a great year in general,” Anderson said. “He had very few losses this past season, and I can’t wait for him to maybe make the transition to varsity next year.”

Another freshman who had an outstanding year was Will.

“Although Will Richardson is only a freshman, he wrestled really well and was nice to everyone on the team,” Mason Myers said. “His motivation definitely helped me and others throughout the season and while wrestling.”

Cole and Brandon weren’t just successful against Lowell but against almost every opponent they faced as well; maybe more importantly, the two were also respected by other wrestlers on the team.

“Cole Kaminski was a huge part of our success,” Cam said. “He was just really supportive of the whole team.”

“Brandon Weiskopf was a huge part of our success during our stretch of winning,” Will Richardson said. “Although he didn’t wrestle a lot, he only lost once, maybe twice.”

“How close we were as a team really helped our spirits,” Will said. “Everyone was just happy and wanted to be a part of this team.”

The season ended at the Godwin Heights Tournament, where many Rangers persevered throughout the day to earn themselves first, second, or third in each of their brackets.

Many wrestlers talked about how this tournament was like their season: they had to push through adversity and lean on each other to be successful.

“The comradery was the best part of the season,” Mason Wiltz said. “We’re a bunch of young guys who will be wrestling together for a while, and I’m looking forward to it.”

Anderson was pleased with the team’s work ethic.

“Overall, our guys worked really hard, and they were very focused,” Anderson said. “I feel like even though the record didn’t indicate it, they had a great season and prepared themselves well for the future when they’re on varsity.”