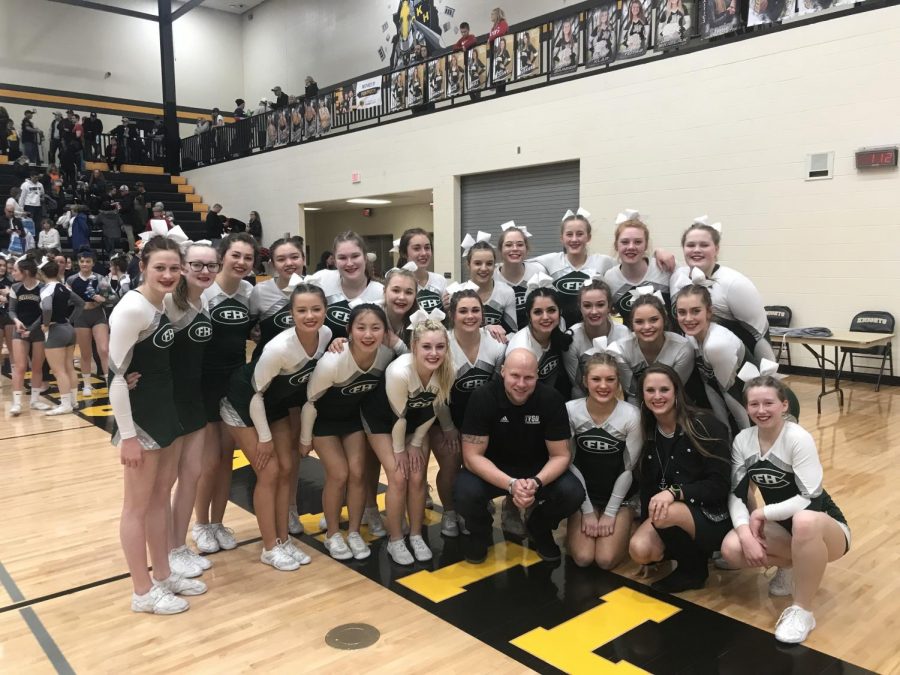 To wrap up the season, the Forest Hills Central competitive cheer team took part in its first Regional competition in school history. Overall, the Rangers did very well and took fifth place out of twelve at the competition; they also were able to secure a title of being in the top ten in the state of Michigan.

In order to move on, the Rangers would have had to place in the top four, but sadly they missed it by just a few points. Nevertheless, the Rangers were thrilled with the outcome.

“Some teams cry to take fifth, but for us, it was a huge accomplishment,” head coach Olivia Obetts said. “It means we were almost as good as the best of the best, and we were better than programs that have been established for years; we will be remembered as a team that almost made it to State during its second year.”

In their first round, the Rangers scored a very impressive 220.70 to kick things off. Their motions were very tight, their voices were extremely loud, and they did everything they were supposed to do. In round two, they did all of their stunts and skills perfectly, and no mistakes were made. Round two was also a high-scoring round for the Rangers, as they scored a 202.52.

“The first two rounds were so great,” senior Jordan Boltres said. “Everything went as planned, and we did exactly what we needed to do.”

Round three was a little shaky for the Rangers, as there was one small slip-up in the beginning moments of their routine with a stunt fall. However, they did not let that stop them, and they still went out and scored a very good 286.80 in the final round.

“In the third round, despite the stunt fall right off the bat, we performed well,” Jordan said. ”All the girls coming back next year can use that as motivation to not make those same mistakes again.”

During the competition, not one person shined more than another. Every single teammate played a key part in how the Rangers placed.

“Everyone stepped up; we knew what we had to do and what we had to accomplish,” senior Grace Conn said. “This is not an individual sport; we are a team and a family, and we all stepped up.”

Even though the Rangers’ season has come to a close, they were able to finish it even better than they had ever expected.

“Making it to Regionals wasn’t even something we expected to do,” Obetts said. “Two and a half weeks ago I brought in Anne, the coach of the team at Cedar Springs. She expressed to the girls that everyone was rooting for them. The encouraging words she gave them fueled their fire, and it never went out. They really peaked at just the right time.”