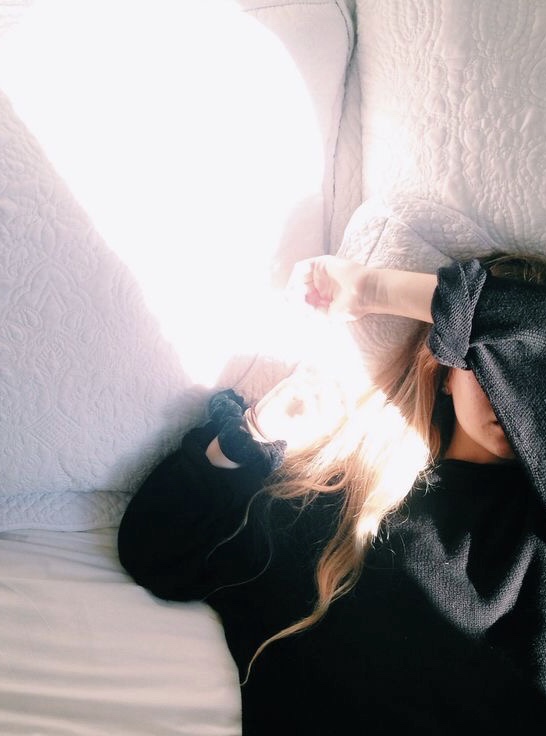 Brilliantly bright, blinding light shattered her vision, fragmenting her life into dazzling pieces; her mind was swept away like nugatory dust.

The broom that brushed her away—crafted from dreams—electrified her mind, fetching her imagination.

And with the gust of inspiration following the sweep, her eyes carelessly collapsed, rushing to the sweet prize laying just out of reach like an incentive for “playing well.”

Scenes scattered across her closed eyelids. Moments, anomalous and never seen before, became heightened, sensitive to her mind’s sudden decision to hope. Colors became more vivid as the rainbow of hues replaced the eyelids’ terrifying tenebrosity.

Her eyelids were merely a backdrop to this resounding, perfected play; every character, especially herself, pranced across the stage like they had practiced this a thousand times before.

First, she saw herself sitting against a knotted tree. Glistening glee was spread across this version’s face, and uncontained happiness radiated off her as if she were the sun herself. Shimmering eyes, devoid of anything except content, scanned the forest floor.

Beams of sun peeked through the trees, playing into nature’s own hide-and-seek; they sought out the flowers, the animals, and the river, diverting from one subject to the next. But all the rays focused in on someone in particular: her.

Yet it wasn’t the real version of herself; physically, she was not leaning against a tree as wind coated her in a cool embrace, perfect for the midsummer day.

As her mind began to notice that the irrevocably similar girl on the forest stage was not truly the real her, the scene flickered; like a broken light, one on its last legs, black and the familiar bright light mixed as it gave out.

The show—her dream—was losing steam as reality aimed to sneak behind the scenes.

But reality had lost this battle as the stage prepared a new play for her mind to devour between flashes.

There she was, yet another copy, sitting on a bench. A brick pathway lay just beneath her feet, and she kicked them back and forth; she’d never been able to sit still when nerves burdened her guarded veins. The girl—practically identical to herself—was writing. Ink was etched into the lined paper as the pen opulently pirouetted to connect letters.

Birds sang harmonious melodies as this rendering of herself signed the letter. Even though she was in the audience of this grand dream, she could feel the emotions pouring into the words; a stranger of emotion greeted her, one she had rarely felt before.

When she observed that the letter was finished with a delicate heart, the strange feeling released its name to the audience: love.

Love is what was emitted from this scene. This copy of herself was so blissfully in love that her heart floated to her eyes, masking them in hope. This version was so utterly in love with life, in love with the world, in love with herself that the hearts she drew pulsed with endearment.

Once again, as if this were a fantasy, the girl on stage was not her.

And this time, reality succeeded when the realization sank in, sending a chill across the stage. The lights flickered once more, and with a bone-chilling screech, the bulbs shattered, and the scene dissipated.

Her eyelids fluttered open in reaction, terminating her imagination’s creation.

No longer did a copy of herself stand before her, acting out an unrealistic dream on stage; now, her eyes peered through the suffocating darkness.

Across her room, the mirror was hung on the door, and her eyes soon found purchase in its contents. Her reflection glared back at her in the middle of the eerie night, and all that she was lacking became painfully evident, maiming her heart.

Reality screamed to be recognized, and aches seized her body.

She was not those unachievable versions of herself that pranced around her dreams; she was the girl lying in her bed with only fleeting hope weighing her down to Earth.

So she desperately closed her eyes once more and let the show in her mind pacify the hurt plaguing her heart.