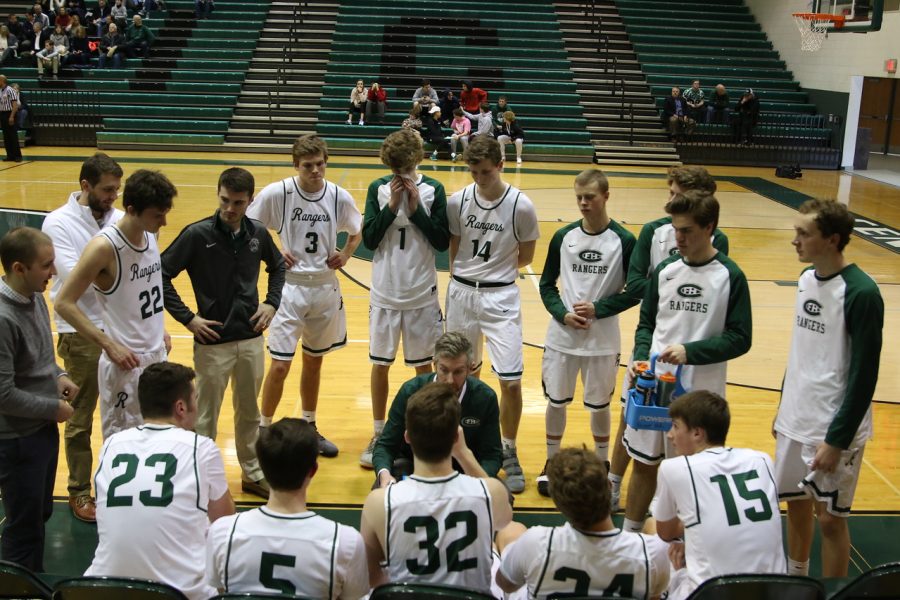 The boys varsity basketball team drew a bye in the first round of District play and will be well-rested when it plays arch-rival Forest Hills Northern in the semifinals at Greenville High School. The Huskies grinded out an 8-point win in the first round against Rockford to improve their record to a perfect 21-0. The Rangers enter this one at 12-7, including two losses to FHN.

In the first game between these two teams in the regular season, the Huskies won a back-and-forth affair by 8 points. The second game could not have been more different, as FHN controlled the game from start to finish and won by 30. In that game, the Huskies had four players all in double figures. Starting guards sophomore Ethan Erickson and senior Trent Summerfield, both great shooters, combined to hit five three-pointers for FHN, one more than the entire team did in the first matchup. Off the bench, sophomore guard Trinidad Chambliss and senior Caleb Gildner scored 16 and 18 respectively, leading the Huskies in scoring.

Once again, the Rangers’ seemingly only advantage is in the frontcourt. Senior forward Dan Deindorfer was very effective in the first game against FHN but did not play as well in the second. The Huskies are not a great matchup for Dan. They start big man Ian Ramperstad, but he is very foul-prone and when they take him out, the Huskies like to play a five-guard lineup to spread the floor and attack the rim.

With Dan being a pure big man, it is a very hard matchup defensively for him to have to step up and guard on the perimeter. Likewise, it is a very hard matchup for FHN defensively. Having to stick a guard on Dan is asking for disaster and getting dominated in the paint. It will be interesting to see how often head coach Kyle Carhart plays Dan against the five-guard lineup of the Huskies.

One big advantage for the Rangers could be the rest they have had. After playing the very difficult three games in a three-day stretch last week, when they take the floor on Wednesday, it will have been six days since they last did. For FHN, however, it played a very difficult first-round game against Rockford and only has one day of rest in between. For being a good shooting team, it will be interesting to see if the Huskies’ legs recover in time to shoot the ball well.

If junior point guard Jimmy Scholler and junior guard Mitch Wilkinson combine to score upwards of 40 points, the Rangers just might have a shot to knock off the undefeated Huskies.