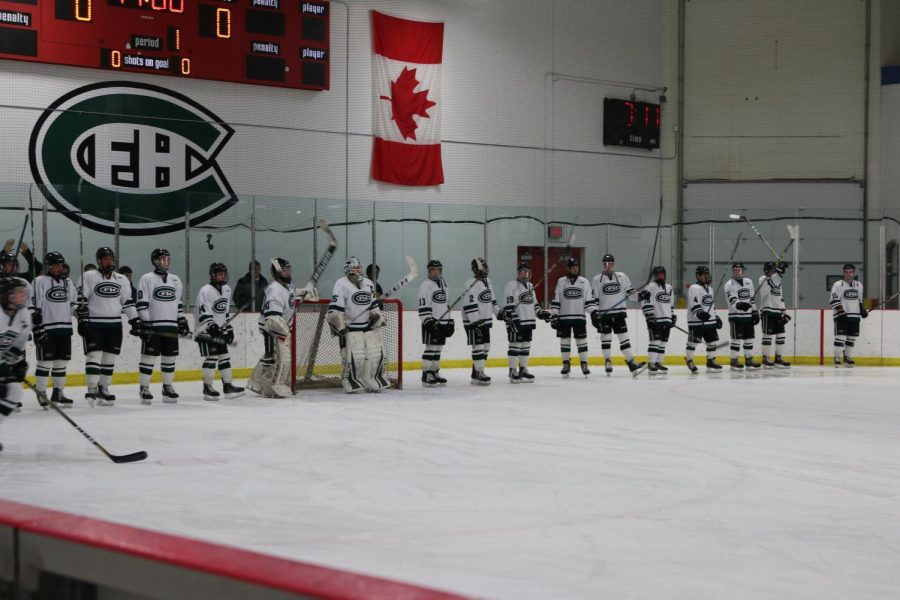 Senior starting goalie Carl Mielock, returning for his fourth year as a starter, came into the season with minimal expectations.

After a season with a 12-13-1 record in 2018, a very young Ranger hockey team came into the 2019 season without a whole lot of experience and a rebuilding year in mind. With nine newcomers to the team, Carl, his fellow seniors, and the star-studded junior class prepared to take over the leadership on the team, but they needed help from their rookies.

From Carl’s perspective, playing with such a young team had its challenges.

“Some of the young guys didn’t quite know how to be consistent—especially against good teams—at the beginning of the year,” Carl said. “However, we definitely matured and got more confident over time.”

Even with the inexperience, the season got off to a hot start. In the month of November, the Rangers started out on a 4-0 run, much different than the 0-7 start from last year. Not only were these early-season wins, which are always tough, but they were high-quality games against powerhouse programs. Wins against Lowell/Caledonia, Grand Haven, and Bay City were strong team performances, but the rivalry win over East Grand Rapids was something special.

After EGR ended FHC’s playoff hopes the year before with a game-winning overtime goal, the Rangers still had a sour taste remaining in their mouths. All four goal-scorers on the day were members of the team that lost to the Pioneers last year, and it was more than just a game to the boys in the 4-0 shutout win over East.

“For the veterans on the team, beating them after the loss last year felt electric,” sophomore forward Jacob Campbell said. “That win really gave us some confidence and proved that we weren’t going to be pushed around by our opponents [like last year].”

The Rangers built on the momentum from the EGR win with a swift 7-0 win against Bay City, giving the impression that the team could really do something special this season. After the Bay City win to close out November, the Rangers were brought back down to Earth the very next day. Playing against an extremely talented Saginaw Heritage team—who happened to be the third-ranked team in the state of Michigan—FHC fell by a resounding 6-0 scoreline.

Fortunately for FHC, the following week picked that momentum back up. With a 1-1 tie against a very talented Farmington United team, a 7-2 win over Reeths-Puffer, and an 11-0 win against Southgate Anderson, the Rangers dodged a potentially fatal bullet and immediately picked things back up, setting up for a successful rest of the season.

While the 11-0 shutout was a huge win for the team, that game meant something more to a certain member of the team. During the first intermission, captains junior Hayden Sarjeant and Carl discussed bringing in team manager Matthew Simonis to achieve his dream: playing goalie for the FHC hockey team. Not only did Matthew play, but he maintained a shutout, recording multiple saves throughout the period. For head coach Kevin Zaschak, this decision was an easy one.

“Matthew is a one-of-a-kind young man,” Zaschak said. “He does everything behind the scenes, and he deserved this opportunity.”

Following the blowout win, the star-packed junior class scored five out of the seven total goals in the 7-4 win over conference opponent East Kentwood. Another conference opponent, this time in the form of Grand Rapids Christian, awaited the Rangers. After a fairly stagnant offensive performance, junior Cole Munger netted the game-winner en route to the 2-1 overtime victory.

In the next game, the team defeated the Grandville Bulldogs 5-3; this win also happened to be the first full game played by freshman goalie Jake Munger. Due to Carl’s suspension after an ejection in the Christian game, Jake got his opportunity. He recorded 22 saves off of 25 shots on goal, giving him an .880 save percentage on the night. This game showed that, even with Carl’s departure after this year, the Rangers are in safe hands with Jake taking over the reigns in net for future years.

Following a 2-0 win versus Lowell/Caledonia, a bit of a cold stretch followed for the Rangers. In the next four games, three of them would result in losses. With narrow, one-goal losses against rivals Forest Hills Northern/Eastern and East Grand Rapids, a win over rival Catholic Central seemed like a possible life-saver.

From being down 1-0, to being up 2-1, and then being tied 2-2, the game was continuously back and forth. With the score being tied up for all but one minute of the third period, the Cougars and the Rangers exchanged shot after shot, but the score remained the same. That was until Cole Munger raced away on a three-on-one breakaway, hitting his shot past the goalie to give the Rangers the 3-2 lead with 23 seconds remaining and ultimately the win.

“[That win] felt amazing,” sophomore forward Mason Kelly said. “A win against a rival like Catholic Central made for a happy locker room and turned around the season after a rough patch.”

After three close losses, the Rangers rebounded once again with a dominating 5-1 win against Rockford, a team that is ranked tenth in Division 1. The boys followed up the huge win with a blowout 8-0 victory against East Kentwood, which was followed by a 3-2 win over Mona Shores.

In the next game, the Rangers had a rematch opportunity with crosstown rival FHNE. After losing 2-1 in the previous affair, no one on the team wanted to be swept by FHNE. In the first and second periods, FHNE jumped out to an early lead, going up 2-0. Towards the end of the second period, senior Cole Ott reduced the deficit to 2-1. The third period wasn’t much different than the rest of the game, with the score staying the same until an empty-net game-clincher from FHNE with 22.4 seconds left in the game.

Although the Rangers did suffer a tough loss once again, they had four games to fix things up before playoffs. They did just that, going 3-0-1 in the last four games of the regular season. Impressive wins against east-side teams Midland Dow, Plymouth, and Ann Arbor Skyline were highlights among the results, but a 3-3 tie against conference opponent Grand Rapids Christian was the most impressive.

After falling to a 3-1 deficit and playing without star junior defensemen Ryan Jeffreys and Hayden Sarjeant for the majority of the game, a comeback seemed very unlikely. Hayden started off the scoring and Cole Ott finished it, tying the game with 6:13 to go. The score stayed tied throughout the remaining regulation and overtime, and the team would gladly take that tie after the unfavorable hand it was dealt for the game.

“[That game] was a testament to our never-quit attitude that we have in our program,” Zaschack said. “To battle through injuries and penalties to come back from being down 3-1 showed how we can play in mentally-tough stretches.”

In the first round of the playoffs, the Rangers took on Jackson Lumen Christi in the Regional Semifinals. The game was close and competitive for all three periods, but FHC led and dominated for the majority of the game. With only two minutes remaining in regulation, the Titans managed to get the puck past Carl, tying the game at 2-2.

In overtime, opportunities were plentiful, as Ryan Jeffreys hit the post, narrowly missing the inside for a goal. As the clock surpassed 2:00 left in the first overtime, a poor FHC giveaway on the defensive end led to a breakaway opportunity for the Titans. Jackson Lumen Christi capitalized, scoring the game-winning goal with 1:48 remaining in overtime and ending the Rangers’ season early in the playoffs.

The Rangers finished with a 17-5-2 record on the season, a record that no one expected before the season after losing key seniors and having an overall inexperienced team.

“I am very proud of the boys, as they continued to represent our team, school, and community in a positive manner this season,” Zaschak said. “I love this group of guys, and I look forward to next year’s successes.”

Going into next year, the Rangers return the bulk of their team core from this year. Nine of the top ten players on the team will be back next year, including leading scorer Peter Bardelli and leading assister Cole Beaufait. According to Carl, the team is in good hands.

“Next year, the team will have way more seniors who will want to finish off on a good note,” Carl said. “With the experience from this year, the guys will be much more aware of what it takes to compete with the top teams consistently, and I can’t wait to see how they do.”