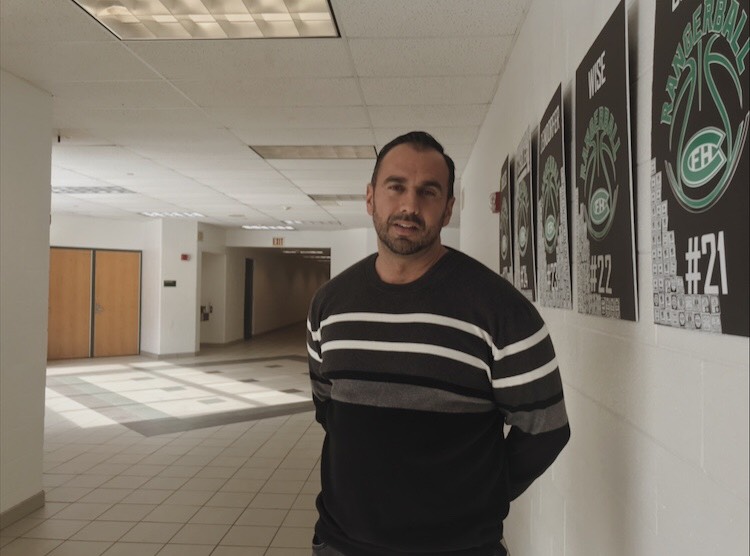 TCT reporter Amanda Bartolovic sat down for an interview yesterday with David Jangda, a clinical psychologist who works for FHPS. Her interview is the third story in The Central Trend‘s five-day series on Mental Health.

Q: Can you state your profession?

A: I’m a clinical psychologist, so I work for Pine Rest, exclusively for Forest Hills Public Schools. So I see K-12 kids [that have] any level of mental health issue, from day-to-day stuff to crisis, inpatient, and safety things.

Q: What are the common types of issues that teenagers bring up regarding their mental health?

A: Most common is drugs and alcohol use, abuse, and dependency. [Also common are] mood issues, some depression and anger issues, anxiety issues, excess worrying and stressing, suicidal ideations, and ideas and thoughts or actions towards suicide. Those are probably the most common things that I deal with every day.

Q: Why do you think these are the common issues?

A: I think they’re the most common because those are the most common things I think all of us deal with, issues with life stuff. Life is tough, and it can give us difficulties with relationships and families. In school, [the issue is with] academic pressures and what you’re going to do in college.

So all of that stress can really exacerbate anxiety, which leads to a lot of depression, and if you don’t take care of yourself in a good way and have balance, it makes it a lot worse. These are very common things that can get out of control, and that’s why I think they’re so rampant in schools. They’re things you deal with your entire life. You start them more in adolescence, so high school is a prime place for them to really begin.

A: I think technology is significant. I worked in the Emergency Room for a lot of years and in the inpatient unit, and a lot of cases of kids committing suicide or making an attempt of their life was accidental. It was at the moment, a situational. They got a text. They got a Snapchat or Instagram. Something happened in the moment; they impulsively made a bad decision. I think technology has allowed that; it’s given a venue for people to communicate in a very passive way, where they can get away with a lot. I think the exposure to social media makes it even worse, so I think that’s part of it. I think the onset of vaping, marijuana, and dab pens make it a lot worse, too. That’s why I think the suicide rates have gotten so much higher.

Q: Why do you believe the acceleration of technology in the recent decade has affected the mental health of youth?

A: [Technology has] a very addicting quality to it. It does give a dopamine response to dopamine receptors in the brain that stimulate and give a euphoric response. Unfortunately, it has a very negative impact on youth and adults. I’ve been at Pine Rest for fifteen years. When I started there, there weren’t smartphones, and we have dramatically gotten busier as an organization and increased our bed space. The main common denominator of that is technology. That’s what I think has changed in the past fifteen years.

Q: Do you think there is a stigma surrounding mental health?

A: There is [a stigma]. I think it’s gotten a lot better. People still look at mental health and attribute it to weakness or a bad thing. That’s not true. Everybody has a certain level of mental health needs. It’s like a physical need, so your physical health, eating healthy and exercising is no different than doing the same thing for your brain. Making sure that we’re getting rest, that we’re doing things to create balance in our brains and avoid stress, is the same thing [as maintaining physical health].

People are talking about it and accepting it more, but there’s still a stigma attached to it, unfortunately. Some people are maybe ashamed or embarrassed to get help, but really, if they got the help that they needed, knowing that everybody needs it, it would lead to a happier and probably easier life.

Q: How do you feel about the stigma surrounding mental health?

A: To me, it’s very frustrating, and I don’t think it’s deserved. It’s sad that people have that negative stigma towards it. I wish that people would understand it for what it really is and accept it. [I wish that people] would seek out the support that they really need and help others that are going through something, rather than look down or posting judgment on people who are going through it. I’m hoping the stigma gets to be more of a positive because it should be. Everybody, at some point, needs to get help. Everybody has anger. Everybody has anxiety. Everybody has some level of depression. Nobody is exempt from it.

Q: How do you think people could lessen this stigma?

A: Education and doing more reading [to] understand it better would help. I think people have negative connotations of things that they don’t know about. A lot of it is ignorance. I think if people listened and talked to other people, they’d understand what was out there and why people are getting counseling or getting help in any way.

Q: How do you think schools are handling students’ mental health?

A: I think our district is doing a better job than most. Most school districts are still ignoring mental health. They’re not accepting it, and they’re not addressing it. Our district is pretty open about it. There are positions like my own, and we address it. We offer support for the students and their families, and we’re willing to talk about it. We have a lot of resources with our AAA committee, our parent group. We have things in our buildings that we do on a daily, weekly, and monthly basis to talk about mental health. We have counselors and social workers, so if students are struggling, we have immediate resources in our buildings. I think schools are more aware of the issues and more accepting of it today than they may have been twenty years ago.

Q: Do you think enough people are seeking the help that they may need?

A: I think it’s getting better, but no, it’s still not at a point where everybody that needs help is getting it. A lot of it is financial. So if you don’t have the right insurance or if you don’t have insurance at all, then you’re not getting the mental health support that you may need. There should be a lot more resources for people.

Q: What would be your recommended first steps for someone to take if they are concerned about their mental health?

A: I would recommend that if anybody is concerned about their own mental health, to go talk to a trusting adult, be honest, and understand that it’s a great thing what they’re doing. They can get help, and they can feel better. If someone needs help at FHC, we have great counselors. We have great administrators. We have a great social worker here. We’ll get them the help that they need.