Soho Sushi proved the long drive to be worth it 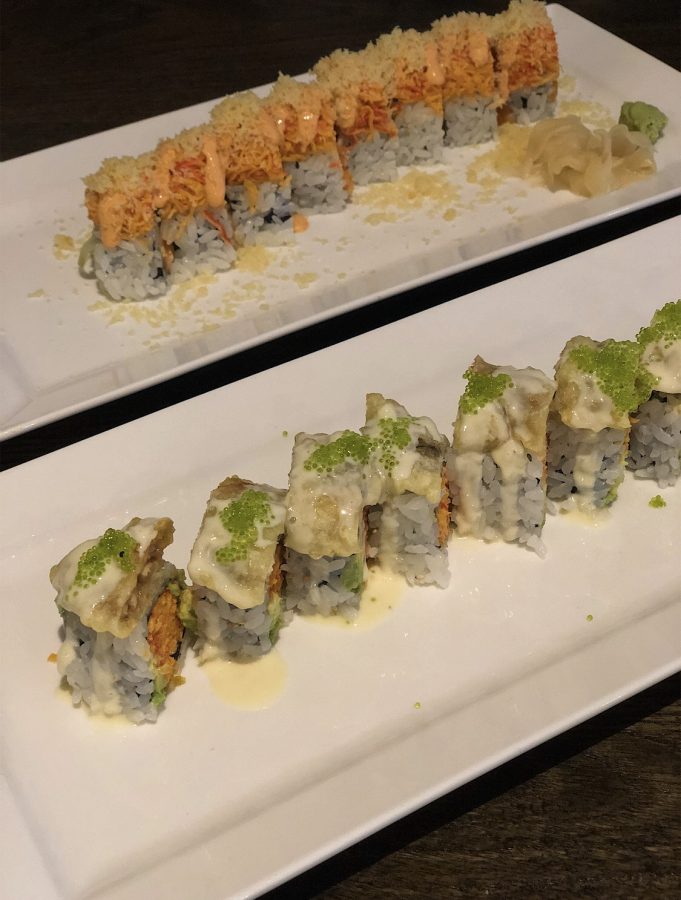 After taking five laps around the same bland block of buildings, totaling over twenty minutes, parking in downtown Grand Rapids left me exhausted as the wind briskly bit my skin on a frigid Tuesday.

During the agonizing, bitter walk from the car to Soho Sushi—my destination that I frankly knew nothing about—hunger only further brewed in my stomach like an excited cauldron. Just the word sushi in the restaurant name had piqued my interest due to my continuous craving for another roll.

While I was intrepidly daydreaming of what my meal would be like, the outside of Soho Sushi unabashedly greeted me with its distinctive appearance; all around me were familiar faces of predictable cement building, so the inky wooden front of the restaurant presented itself as a substantial mystery with clear colossal windows being the only peek in.

Embarrassingly, my mother and I scampered in, stashing ourselves inside away from the tormenting cold. Abruptly acknowledged by the hostesses with a smile almost as warm as the heating, we were guided through the compact dining space to a sun-lit table.

From the restaurant name alluding to a simple sushi joint nestled into a building on Monroe Street, I had not expected the surprise the menu delivered: within the various pages, sundry sushi rolls, noodles, and hibachi options were displayed.

Because of this large selection from Chinese, Thai, and Japanese food, my eyes darted from page to page, sedulously scanning and searching for the perfect dish; however, the insatiable craving for adventurous sushi rolls presided over my thoughts. Giving in to my sushi desires, I skimmed over the venturesome, bold combinations of fish, avocado, and much more.

With some advice from the hospitable, welcoming waitress, I ordered the Soho Roll—drawn in like a fish by the restaurant name and the promise of eel—and an appetizer of vegetable gyoza.

Lacking a busy crowd, my appetizer was out in a little under ten minutes, much to my hangry (hungry + angry) delight. Steam radiated off the seared gyoza, attesting to the flavorsome freshness. Fumbling around with my chopsticks, I excitedly bit into the first one with glee.

My nerves of excitement fizzled out as disappointment dampened my mood once I finished the first piece. Vegetables crisply snapped with my bites—yet another atonement to the quality—but the soft casing fell flat against my tastebuds, lacking any crunch.

Despite the vegetable gyoza not containing any “wow” factor, I finished off the six of them just as the punctual waitress brought out my roll.

Fumbling around with my chopsticks just a little less now, I plucked the first piece of decadent, savory sushi off the plate with an ounce of hesitation; from my previously high standards with the gyoza, I lowered my excitement for the roll, not expecting much.

Yet within the first bite, the score had been evened out. Tempura eel, crab meat, and avocado tactfully melded together within my mouth, fusing a rainbow of flavors and textures together. The crunch of the eel flakes and malleable texture of the avocado balanced each other out, creating an adventure of flavor.

With my mother as my witness, I mortifyingly demolished my plate, unable to get enough. Fulfilling my greedy appetite, my two plates sat wiped clean, empty of the food that filled my stomach as I was on my seventh drink refill.

Thoroughly satisfied with my meal—for once I did not order too much—the combined cost for my appetizer, side of rice, and outstanding sushi roll was $20, impressing me.

For a rather inexpensive price, Soho Sushi delivered an appetizing, palatable meal without any reserves, and due to the expansive variety of food, I plan on dropping by again very, very soon.