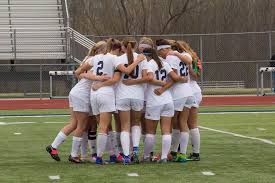 After coming off of a remarkable 18-3 season, the girls varsity soccer team will look to achieve even more than last year. Last year ended in heartbreaking fashion, as the Lady Rangers lost in the District Finals to Rockford in Penalty Kicks.

With a bulk of last year’s seniors now gone, it will now be time for this year’s seniors to step up and play an even bigger role than last year. The good news is that this team seems to be meshing well so far, which is always good to see early in the season.

“So far, I think we have a very good group of people for this team,” senior Chloe Grooters said. “Some of the people on this team I have played with for years and some I haven’t, so it’ll be fun to get to know them and how they play.”

This year, the Lady Rangers return 12 players, including one of their leading scorers in senior Ashley Ward. The team will also look to rely on some of its youth, such as freshman forward Lauren Koczenasz, who will be a key piece in order for the Lady Ranger offense to have success.

FHC will also look for success in the midfield, as the Lady Rangers return key starters from last year’s team such as senior Grace Kline and sophomore Megan Clayton. Grace and Megan will look to take a bigger role this year, both on the field and as leaders.

“My personal goals this year are just to have fun; it’s my last year of playing soccer,“ Grace said. “But I also [want] to be a leader on the team.”

The defense for FHC will also be key in order for this team to have success, especially in the postseason. With a solid defensive squad last year, the Lady Rangers return the bulk of the defense. Key players will be Chloe Grooters, junior Ally Francisco, and sophomore Whitney Currie, as all three started last year. Sophomore Autumn Burns will also see a bigger role than last year, as she will be one of the go-to defenders this year. Just like the offense, the defense has a high aspiration for itself this year.

“I would say a common team goal for us would be to win our conference again,” Ally said. “We also want to get revenge on Rockford after what happened with us last year and go further in the playoffs.”

This Lady Ranger team will be tested right away with three challenging games right out of the gate. They start the season tonight in a much-anticipated rematch with Rockford. FHC doesn’t get a break after that, as it will have its first home game just five days later against the Eagles of Grand Rapids Christian. The Lady Rangers will have a long break before they face quite possibly the most challenging task of the season—the Gull Lake Blue Devils. The key to this tough three-game stretch is going to be consistency from half to half.

“The key to have success in the first three games and the whole season will be to play consistently both halves of the game,” Ally said. “We struggled with this last year by only having one good half per game, and that’s why we consequently lost some games we should’ve won.”

FHC will kick off the season tonight at Rockford High School against the Rams. This game will test how well the team works down the stretch and late in the game, as this game will certainly be close.