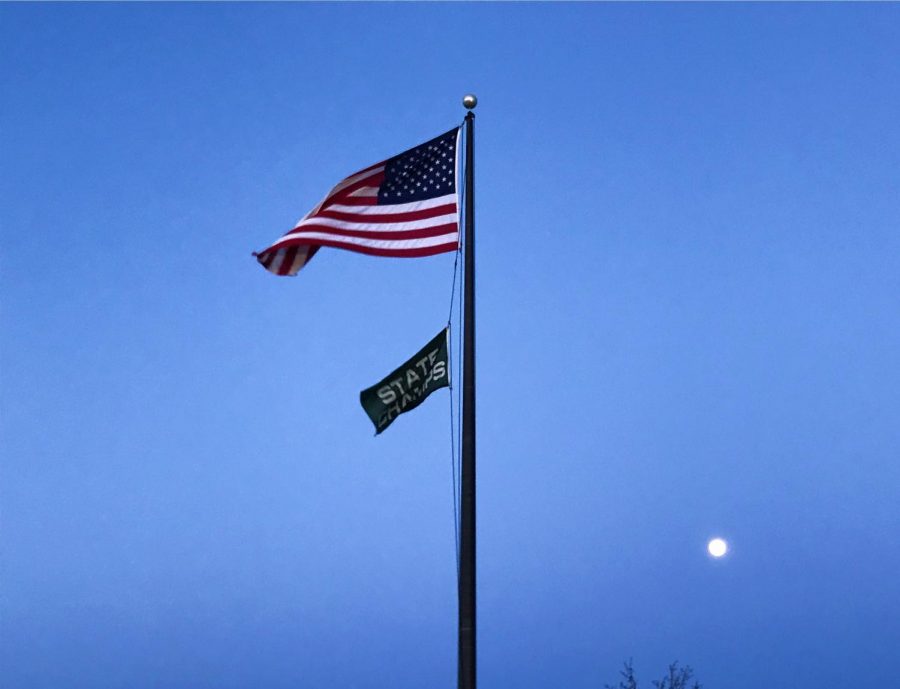 In seeing their dedication to their sport, their teams, and their school, Urquhart decided upon a new tradition, one that would still carry weight and significance even 15 years later.

The idea put into place in that fall of 2004 was the flying of the State Champion flag in front of the building. Signaling to the community the deeply-rooted sense of pride in FHC athletics, every State Champion team or individual would be honored and recognized by having the flag fly for one year. Now, 15 years later, the State Champion flag has never been taken down (except to be replaced when it wore out) and still flies high.

“Part of the significance to me is that you start looking back, and we’ve had a state champion individual or team walking our hallways forever,” Udell said. “What it means is that all of our students walked the hallways with a State Champion. I don’t know how many schools can say that.”

Reinforcing the school’s values of pride, tradition, and excellence, the state champs flag is a continual reminder of the athletic successes from past seasons. Even more than what athletes can accomplish, the State Champions flag also signifies the widespread excellence all throughout FHC, in various programs.

“I think [school pride] plays a huge part [in athletics],” Udell said. “I think the two are very intertwined. You inherently take more pride in your school when you’re an athlete or you’re in the band, the orchestra, the musical, [or] DECA. Whatever it is, you’re representing something bigger than yourself.”

“It sounds cheesy to say that it shows that we’re a State Championship community, but we are,” Udell said. “It’s also humbling to think that you’ve done something for the entire school to be proud of. It may seem self-serving, but it actually isn’t. It’s like, ‘Hey, I played a role in the culture here that’s positive.’”

While Udell’s perspective may seem to only represent the coach and athletic director’s outlook, athletes as well feel a tug of pride for State Championships won, as all of their hard work came to fruition in winning and through recognition.

“Being one of the State Champions at our school is a huge honor,” said two-time State Champion (individual and team) for skiing Courtney McAlindon. “I feel pride every time I see the flag flying outside. I think FHC honors State Champions really well; it is not every day you get to walk across the gym floor with the whole student body around you cheering you on.”

Recognition for State Champions mainly comes in the form of verbal congratulations during school-wide assemblies, indicating to students the importance of honoring those athletic accomplishments and encouraging them to set goals in order to attain achievements like State Championships. For Courtney, seeing the number of State Champions and what an honor it is was an inspiration.

“I had always dreamed of becoming one, so every time I heard Mr. Udell talk about it I just wanted to work harder and achieve my goal,” Courtney said. “It was surreal at first, to be honest; I was in shock. I couldn’t believe that I did it; it has been a dream for quite some time.”

Although the flag is a time-honored tradition now of FHC, there are some drawbacks to greatly celebrating State Champions, as the expectation can easily become an “all-or-nothing” mindset.

“I personally think every athlete should have a dream of winning a State Championship, but it’s not a make-or-break type of success, where if you win it, you’re successful, and if you don’t, you’re not,” Udell warned. “I think that’s the danger of the state champ flag, whether we have a team that wins a State Championship or not doesn’t define who is successful or not. It’s hard when you go to a state final and lose, but it doesn’t make a team or person not successful.”

Similarly, world history teacher and wrestling coach Brad Anderson emphasized the honor that there is in even qualifying for some level of state finals for competitions, regardless of whether one’s hard work results in a State Championship win or not.

“Knowing how special [winning a State Championship in wrestling in high school] was to me, and when I see a fellow State Champion, I identify with them and how hard they had to work,” Anderson said. “Even more so, it’s the runner-ups and the third place people that I’m also [proud of] because they were in the arena, and they fell short. That’s tougher to swallow, but it’s also still a great accomplishment.”

In addition to revering those who are able to finish their seasons with a state finals win, the flag also serves the symbolic purpose of saluting those who fell short in the finals and missed a win by a fraction. Overall though, despite the wins or losses of teams, sports are about going all in and taking pride in the school you represent, a point which Anderson makes as well.

“FHC is one-third of a suburban, special area district,” Anderson said. “You look on any map, and there’s no FH. There’s Ada, and there’s Cascade. FHC is the community; athletics are the heartbeat of that community. Nothing is more pride provoking than putting on green and white and representing your school in a battle against another school.”

In FH, nothing is greater than the community, especially with athletics, and there is much to recognize and appreciate. By raising the State Champion flag in 2004, FHC began the tradition of building a greater sense of pride in the community, pride in school traditions, and pride in excellence.

“We live in a community that is committed to excellence,” Udell said. “[The flag] is one more tangible way to see that we [have] students who are very talented and actually take advantage of the talent they have. That’s what that says to me, that there’s another layer to it than just having talent; we have students in the classroom and outside the classroom who don’t take for granted their talent.