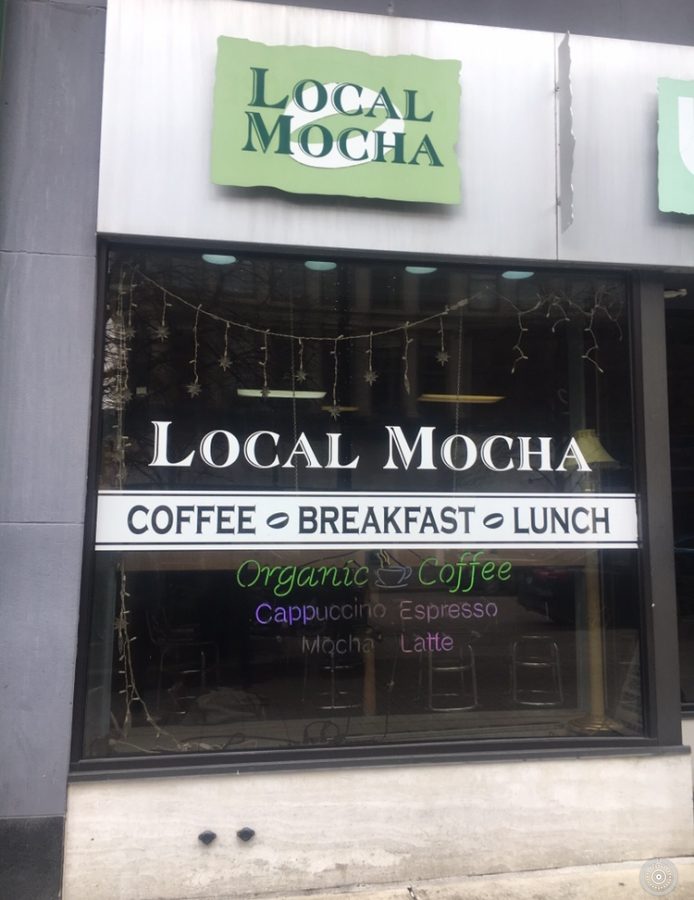 Biggby’s iced teddy bear drink is my go-to coffee, but I decided I’d be a bit adventurous and make my way to downtown Grand Rapids to a little restaurant/coffee shop named Local Mocha.

Online, the cafe seemed homey and cute inside, but as I opened the doors off of Monroe Street, the cute cafe I was expecting was nowhere to be seen. The lights were dimmed, and there were various menus strewn about the walls and counters. There was absolutely no color scheme whatsoever, and it seemed hasty decorated. I was extremely excited to try a different type of coffee than I’m used to, but when I inspected the place, I already foreshadowed that their coffee was going to be a bust from the semi-organized counter and strange setup.

I ordered a large caramel iced coffee, which was way more expensive than I anticipated and added up to be over five dollars. The coffee was made right in front of me so I was fully aware of what was going into my drink.

I watched her carelessly dump an absurd amount of caramel flavoring into my cup without measuring and then pour premade coffee onto my ice. Not only was my coffee made in a sloppy manner like a child, but the taste was nothing above average.

The worker behind the counter was quite nice, but it didn’t make up for the average coffee or expensive prices.

One thing that did surprise me is that Local Mocha wasn’t just a coffee shop as the name suggest but also a restaurant. The cafe also served breakfast, lunch, along with coffee and different beverages, such as smoothies. However, after tasting the coffee, I was turned off on ordering the food and walked out with a lukewarm “iced” coffee in my hand.

The seating in the sad cafe was limited and seemed uncomfortable for anyone that was to actually sit down and have a meal. It looked like one couldn’t sit and eat without being right on top of another customer.

The fact that Local Mocha was even in business dumbstruck me. Local Mocha was not only located on one of the most popular streets for restaurant choices but also right next to the busy, bustling famous Madcap coffee shop which made it hard for me to believe that it was able to stay in business.

The drive to get to Local Mocha cafe took about fifteen minutes, which after getting there was proven to be a total waste of time. I could have gotten a better drink at my beloved Biggby just five minutes away from school or even bought a premade frappuccino from Forest Hills Foods.

After wasting a good hour of my day and five dollars, I was completely unsatisfied and wanted another actual good coffee.