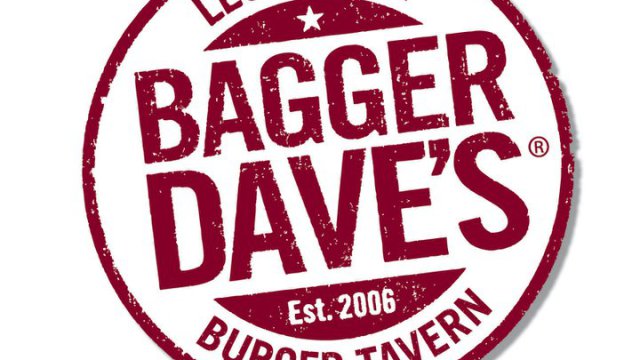 Bagger Dave’s: Are Hand-Cut Fries Worth The Wait?

My dad and I share something in common: a glorious, fanatic love for burgers.  However, not just any burger can pass the “Scutch” test; it takes something special to make a burger worth coming back for.  We had a not-so-spectacular Bagger Dave’s experience in the past and never expected to go again.  Well, things change and menus change.  After three years of ignoring Bagger Dave’s on 28th Street, we decided to give it a second go.

The first thing I noticed after walking into the tavern was a case of cupcakes made by Taste Love, a bakery located in Royal Oak, Michigan.  They were quite cute, topped with decorations making them look very desirable, and came in flavors such as dark chocolate and red velvet.  We stood at the hostess stand for quite some time waiting to be seated.  We were beginning to the think that coming back was a mistake.  Eventually, after a long five minutes, we were seated in the center of the restaurant.  Surrounding the table were large televisions which displayed the different NCAA Basketball tournaments being played at this time.  These were nice to watch considering we would be waiting an extra ten minutes for our waiter. 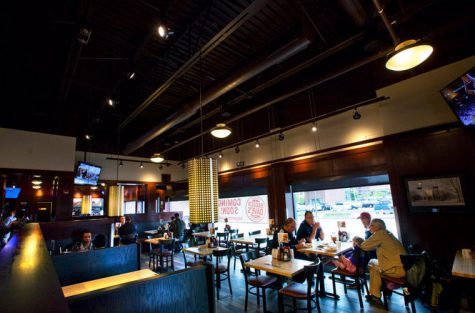 Finally, after he had to be reminded by a coworker, our waiter came to our table.  He apologized profusely as he handed out napkins and said “it’s been a long day” and then asked for our orders.  I asked for exactly what I came there for: a cheeseburger.  I made it very simple and very basic- one beef patty and cheddar cheese between a sesame bun is enough for me.

So, for about fifteen minutes, we shared chats around the table as we waited for our meals.  At this time, I had the chance to take in Bagger Dave’s atmosphere, and observed a really cool thing about this particular burger tavern – it is kid friendly.  A miniature train rides on a track around the perimeter of the ceiling.  In my opinion, the train adds a cute touch of character to the restaurant, allowing it to be more unique and welcoming.

Throughout the restaurant, Bagger Dave’s labels themselves as offering hand-cut fries made from potatoes that are grown in Michigan.  I do not recall this being on the menu a few years ago.  I believe there has definitely been a french-fry improvement.

When our meals were set at our table, I was very, very excited.  In the past, Bagger Dave’s added shredded cheese to their burgers as opposed to sliced cheese, which I was not pleased with.  To see a real slice of cheddar cheese on a Bagger Dave’s burger was very satisfying.  The burger itself was very delicious and very fulfilling.  My dad and the rest of my family were pleased with their meals as well. 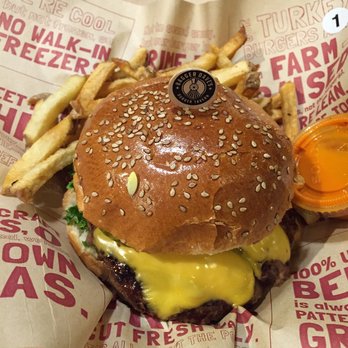 As for Bagger Dave’s hand-cut fries, they were simple and crisp.  I do not know what it was about them, but they had all the right flavors that tempted me to order more; however, I did not.  These fries tasted similar to ones you might pop into your oven; they were not too greasy or fried, but rather light and fluffy.

As said before, much of our time spent at Bagger Dave’s was spent waiting around for our waiter.  Because of this, he offered us a free dessert.  So, how could we not pass that up?  We all shared the restaurant’s “Brownie Deluxe.”  Bagger Dave’s describes it as a fudge brownie with chocolate syrup drizzled onto the brownie and topped with a scoop of vanilla ice cream and whip cream.  It also comes with caramel syrup, but we asked for straight chocolate syrup instead.

Man, that concoction of calories and sugar was of something that I have never tasted before.  It was so, so good.  The brownie was large enough for our group of three to share.

Overall, the staff of Bagger Dave’s may need to work on their time management and waitstaff skills; however, they do know how to provide hospitality, especially with their kind offer of free dessert.

I recommend Bagger Dave’s for families looking for somewhere to go out to eat as opposed to cooking at home.  As described above, this tavern is very kid-friendly.  It features many photos of vintage Grand Rapids and is set in a modern atmosphere which provides both comfort and delicious food.  I do, however, have one big complaint: the waiting.  In their defense, however, I do believe our experience was not the norm.

All in all, my time at Bagger Dave’s was a great outing with my family and definitely a do-over; I will back in the near future.  Except for making us wait around longer than expected, Bagger Dave’s has turned around their reputation of providing scrumptious burgers in a welcoming environment.  And yes, the hand-cut fries are definitely worth the wait.