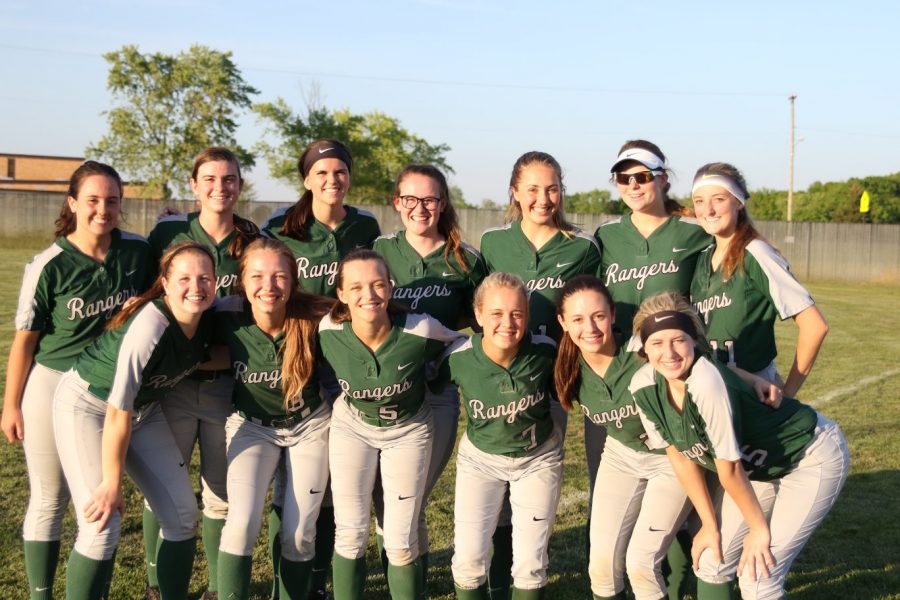 Senior Molly Donovan returns for her fourth season as a varsity starter and is one of the nine seniors returning for the varsity softball team. Coming off of a year with a junior-driven team and an impressive record of 16-12, the Rangers are looking to repeat that success this season through the senior leadership.

“Having that many seniors brings a lot of leadership and experience to the team, and we serve as role models for the younger players,” Molly said. “As seniors, we all have the same mindset and all agree that we want this season to be the best one yet.”

The Rangers graduated just one player at the conclusion of last year, but 2018 graduate Hannah Miller was a staple to last year’s squad. Hannah was one of the Rangers’ top hitters with a batting average of .463 and was also one of two starting pitchers.

FHC returns the other half of the pitching duo in senior pitcher Tori Macleod. Tori has been a four-year starting pitcher and is used to the pressure on the mound.

“Tori is one of those players that you can’t replace; she’s helped our team win some very important games,” Molly said. “She has great leadership, which will help with the underclassman pitchers that joined our team this year.”

Out of 962 total pitches thrown, Tori threw 688 strikes with 35 strikeouts a season ago; she also only allowed 44 runs. Sophomores Kylie Halverson and Faith Addington and junior Caitlin Snyder are all the up-and-coming pitchers, and the three add a much deeper bullpen to the historically-shallow pitching staff. Tori will be head of the pitchers and will be key in helping the underclassmen when not on the mound.

“In years past, we have slightly struggled in the pitching department,” Tori said. “This year, we have new pitchers coming up to help out, which will for sure help. Despite the fact that they are young and new, I have high hopes that they will rise to the challenge. I’m really counting on them to have my back, and I know they won’t let us down.”

In the field, Molly and senior Hailey Enbody will be key for the Rangers. The two have locked down the middle infield together for the past two years and will captain the infield for FHC. Junior Maizey Szczepanek also returns for her second year behind the plate. With ten returning players, the Rangers should have a strong and experienced defensive lineup.

Seniors Val Nuffer and Emma Davis, along with Molly, will fill the void Hannah left offensively. Emma led the team in home runs last season with 5. Val led the team with a batting average of .474 as the Rangers’ leadoff hitter last year; she also earned 29 RBIs. Molly had an average of .442 with 28 RBIs.

“Having Molly on our team is definitely beneficial to the newer and younger players,” Tori said. “There’s a lot they can learn from her, and she’s an important part of our offensive and defensive performance.”

Last season, the Rangers lost all three games of the conference series to both Lowell and Northview to take third in the OK White. These teams will be the Rangers’ toughest competition again this year, and FHC is seeking to avenge last year’s losses.

“Our goals for this season are to beat Lowell and Northview; they’re our hardest competition,” second-year head coach Jasmine Watson said. “The biggest thing we will be working on is communication and making adjustments. When we played them last year, we struggled with hitting and making adjustments. So, situational hitting is something that we will be implementing more in our practices.”

The Rangers start their season off with some of their hardest opponents right out of the gate before the schedule eases up. FHC’s season-opener comes against the historically-talented Grandville Bulldogs, followed by a road trip to Zeeland East for a couple of non-conference games.

Their first conference series is against Northview, which will test the Rangers’ limits early on. After Northview, FHC faces off against Cedar Springs and Ottawa Hills. Last season, the Rangers were able to sweep all three games against the Red Hawks easily and mercy the Bengals every time they played them.

Even though the Rangers lost one of their best players in Hannah, FHC should be able to have a good run at the conference championship and go far in the playoffs.

With nine seniors, the varsity softball team has already established good chemistry and is ready for a successful season with its new motto.

“We came up with the motto ‘all in’ for this season, and that truly encompasses what we need to do to win the conference,” Molly said. “We might not be the most skilled team in the area, but if we have the most intensity, the most heart, and we go all in on every play, then we can have a successful season.”