Spencer Sutherland’s EP, NONE of this has been about you, proves everything from now on should be 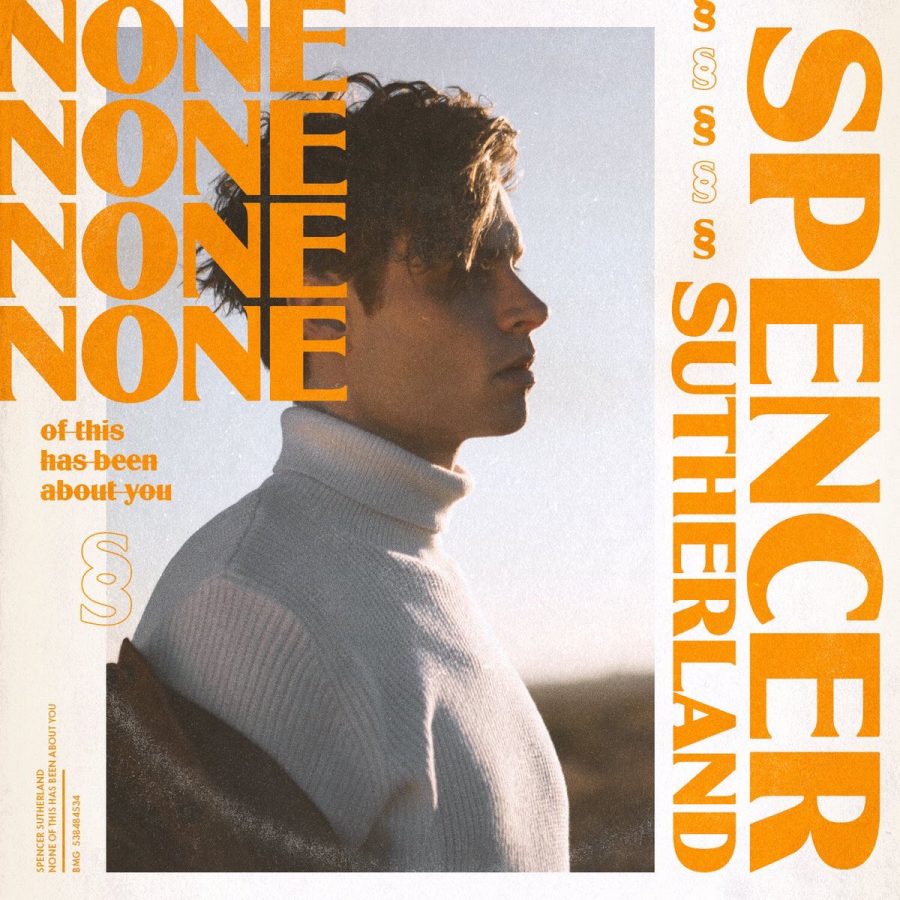 My first thoughts when I stumbled across Spencer Sutherland’s music video “Talk” on Youtube were how have I never heard of you? The colors, the themes, and, I hate to say it but, the aesthetic of every video he has produced has quickly landed Sutherland a place that is pretty close to number one in my heart for favorite male singer of the year.

Although Youtube was the place I first discovered Sutherland, he made his first appearance as a singer in 2017 on British reality TV talent show, X Factor. Eventually being eliminated off the show, he did not necessarily peak in stardom straight off the bat. Since then, Sutherland has been slowly but surely releasing singles, on average once a year.

All I can say is that I am glad I discovered him after he had sufficient content for me to listen to on repeat while doing homework…in the shower… and to show to all of my friends.

What makes Sutherland so irresistibly insatiable? Well, is it naive of me to say everything? Since first hearing “Talk,” saying I was obsessed with him would be a little bit of an understatement. Not only have I become a fan of his, but I have made sure that everyone around me knew who he was and was listening to his music along with me.

But “Talk” was only a single. All he had were singles. It wasn’t until March 15 when I finally had something to listen to without ever letting the rotation end on Spotify. NONE of this has been about you. The EP title and third song on the EP.

However, to kick off the album, Sutherland chose “Sweater” to aid him in his debut. With a somehow hilarious music video to back it, containing Spencer and his ex both fighting over his sweater in a bowling alley, he continues to prove why he should be at the top of every music chart. I just can’t figure out why he isn’t.

“Sweater” is anything but a one-time listen kind of song. “That’s my sweater, my sweater. Why the f*** you got it on?” Does the song really need any more explanation than that? It’s a song to blare your car speakers out (careful not to while on school property due to obvious reasons), and play as a hype-up song for the day– I speak from experience.

To follow in line with his one music video-per song ratio, “Freaking Out” is no exception. Sutherland has been said to have an R&B tune, but if this is true, he takes R&B into a whole new realm and methodically makes it into a genre that suits him. Although each song has similar feelings, along with each of his music videos containing similar throwback colors and themes, they have become more of a signature than a stereotype. I look forward to the upbeat, angelic voice testing new vocal limits I didn’t think to be possible.

Is it insane to say his music sounds how his videos look?

As much as his music videos radiate “retro,” his songs have similar feelings whenever he breaks into his striking soprano over techno voices harmonizing flawlessly in the background. In fact, the only trait he possesses that would even be slightly disappointing is the length of his songs.

All under three minutes, it could be said that he rocks the “short and simple” a little too seriously. But he makes it work. His tunes are similar to Bazzi in the sense that each is short enough that you’re replaying the song before it’s even had a chance to end. And that’s the beautiful thing about Sutherland– you never want it to. And with songs this short, it never has to.

The song the album is titled after, “NONE of this has been about you,” contains just as much emphasis in the lyrics as the capitalization of NONE alludes to. As the song appears to be more pleading than telling, Sutherland attempts to prove not only to himself but also to his ex-lover that NONE of this has been about her. The song speaks about how important it is to value yourself in a relationship and not take the title of “relationship” as an excuse to not care for yourself.

Although slightly more melancholic than the aforementioned songs, “NONE of this has been about you”  proves to be just as electric and unforgettable as the others. He masquerades the sorrowful lyrics with a soulful voice and his signature harmonious background singers.

Sutherland quickly comes out of any desolate mood he may have sung with in his next song “Wallpaper.” With less quantity of lyrics than the past songs, he makes up for it with the way his voice carries every note, taking his sweet time to make sure that his point makes it through the radio static. “I’m way too high for this. I don’t have time for this,” is belted out at the beginning of every chorus.

So far, Sutherland has made sure that no one mistakes him for simply a routine drive home from work. He wants to be the countryside, the ocean view, the rolling hills. He desires to be memorable, and memorable he has proven to be.

The last song to end Sutherland’s sing-along-fest is “It May Sound Strange.” Sutherland takes the ending song in another direction than his past tunes. The first songs in the EP tell mostly despondent stories of annoying exes that Sutherland could do without. However, the ending of the EP may also be the happy ending we all long for him to have. Sutherland sings about how he’s finally found a home, a place where there is no tacky wallpaper or anyone to steal his sweaters.

It was also strange that Sutherland decided to end his thunderous tunes with a somber subject, and while it may not have been my favorite move because it lacks his signature smart-mouthed sound, it was tactful. I appreciate the contrasting end to the EP, and it only further alludes to his diversity as a singer.

Spencer Sutherland will forever be the singer I blare on winding roads with windows down. With stylish music videos to back his retro sound, he manages to create a new genre that fits him comfortably as a new favorite and demands the front seat in my music experience.