Science Olympiad continues to excel, securing a spot at states 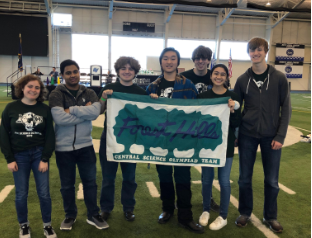 After entering high school last year, sophomore Sukhpreet Singh decided to join Science Olympiad, a team that not only expanded his learning of science but introduced him to a whole new group of friends while competing alongside them.

As a second-year teammate, Sukhpreet could almost predict how the season would go, but the team not only made it to regionals but advanced to states. For an extracurricular activity that takes such extra time and dedication, making it to states was a huge success.

“Due to the amount of out-of-school time spent on learning the material and also competing against some very tough schools in Michigan, it is very rewarding to make states,” Sukhpreet said.

As the students prepare to test on their categories they have to take much of their free time to virtually become a master in their category, which is much different from their school learning settings.

“Science Olympiad incorporates a lot of sciences and different STEAM topics into one academic setting,” Sukhpreet said. “It is a lot of stuff that you will not necessarily learn in class.”

Although the academic club is very time-consuming, Sukhpreet is more than glad he signed up and has enjoyed cheering on his teammates on the road to states.

“My favorite part about it is just how broad it is,” Sukhpreet said. “You get to experience so many different things. Everyone is so nice, and it is a great opportunity to make new friends because everyone helps each other out and wants each other to succeed.”

This is not the first time the team has made it all the way to states; the team has seemed to be very successful in the past few years, continuing to make it to states. But every year, it is always a thrill.

“We were hoping to place pretty well at the regional competition because we have had a fairly strong season,” said senior Science Olympiad member Geoffrey Batterbee. “Although, it was still very exciting for us to see that we had placed second in such a large region.”

Even those whose categories did not qualify for states are able to compete alongside their teammates and help them out before the big day during the competition.

“There are trial events where you are not competing in the competition itself but you can just do something for fun and still medal,” Sukhpreet said. “You can also help the people that are competing study for the upcoming competition.”

Even those who are competing for states have to add new pieces of information and rely on past competitors to guide them through the process and new material that they will compete on.

“For one of my events, there’s brand new content that will be tested at states,” said junior member Suchir Gupta. “I’m also doing Circuit Lab at states which I have never done previously, but my teammates who used to do that event will help me get prepared.”

Although doing well at states is easier said than done, Science Olympiad is much more challenging than most students are used to, but the members of the team take the hard task of teaching themselves and excel.

After qualifying for states, the work has not stopped. The state competition is coming up quickly, and the team wants to do better or the same as they did at regionals. They have been focused on placing high, which means putting in work and staying focused.

“We are shooting to finish in a top-two spot at states,” Suchir said, “which would earn us a spot at nationals. In order to do this we need to do really well in the events we usually excel in and make sure that we place at a consistently high level across the board in each event.”