The Central Trend • May 21, 2015 • https://thecentraltrend.com/626/fx-student-news-show/sports/gameday-a-day-in-the-life-of-ranger-football/

Gameday: A Day in the Life of Ranger Football 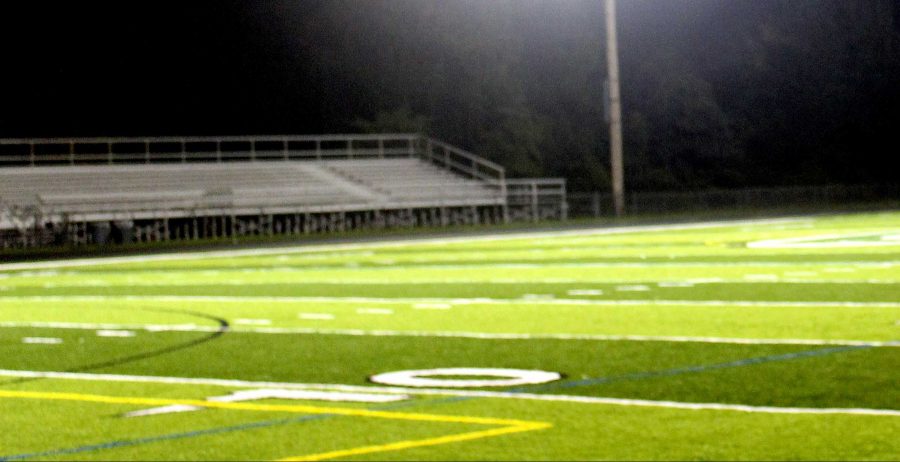 FHC beat Caledonia in an exciting upset on the night of September 12th. You saw the players battle it out on the field, but do you ever wonder what goes down before the game in preparation for battle? Here is a day in the life of Ranger Football, a first person account.

4:17: First Players Arrive- Walking through the locker room doors, the guys arrive in sweatshirts and sweats, focused for the game. However, there is a relaxed atmosphere in the locker room, with players joking around, listening to music, and getting taped up by the trainer. With almost three hours until game time, they can stay relaxed before getting pumped for the game.

4:45: Custom FHC socks arrive in the locker room- Athletic director Clark Udell drops a box in the middle of the room and the players quickly gather around it. Inside are green custom socks that feature the FHC logo, and “Rangers” down the back. A few guys put the socks on immediately, while others stick with the black socks that the captains have decided the team should wear. The custom socks are just one of the many perks of being a Ranger Football player.

5:15: Special teams walk through in the Old Gym- After the guys get suited up in their “All green” look for tonight- green Nike jerseys with green pants- they move to the old gym to walk through their special team formations. Coach Vanderwal reads off the names of the special team players along with their positions. These positions sound a little unorthodox, with names like “The Sam” and “The Gunner.” As Vanderwal names the players, he throws out some interesting nicknames as well. Some ones of note include “Buck Wild” (Luke Buckmeyer) and “Flyin’ Hawaiian” (Marcus Thomas).

5:30: Players get fired up- At this point, the music gets really, really loud. while junior receiver Dylan Otolski can be heard singing the sweet tunes of Tim McGraw’s “Meanwhile back at Mama’s,” most of the guys opt for rap. Below is a collection of some of the Rangers’ favorite pregame music.

5:45: Skill players go to field to warm up- The guys make their way outside for the first time, and the real fun begins. As they walk along side the school and through the gate, they have the field all to themselves, as the stadium does not open until 6. The field is pretty crowded, with David Riser blasting 50-yard field goals, Brett Miller playing catch with the quarterbacks coach, and linemen getting in their stance. After a while, the gates to the stadium open and a crowd of pink seniors sprint towards the student section bleachers. Immediately they try to get the attention of certain players, but by this time, the guys are locked in for the game.

6:15: Rangers head back to the locker room- Once the guys are back in the locker room, it’s time for the intense motivational talks. First come some final words from senior leaders Johnny Nutter, Alex Dykema, Scott Sible, and Jake Vanderwal. The message of their words is simple, get revenge on Caledonia. Next comes a talk from one of the coaches, Ty Hallock. Hallock played in the NFL for seven years, and his speech centers around overcoming adversity as he tells a few stories about his time in the league. Finally, the big talk from Head Coach Tim Rogers. Everyone’s attention is turned to Rogers and he fires the team up with some strong words. With that, the Rangers prepare to take the field.

6:40- Rangers take the field- This might be one of the most exciting moments in FHC athletics. The team gets in a huge huddle in the locker room, says a few final words, and then heads into a long hallway leading out of the locker room. At the start of the corridor is a simple green sign with white letters on it reading “Play Like Champions.” Each player hits the sign and heads down the hallway. Once the guys are outside, they line up in pairs, holding hands with their teammates. They can already see the packed stadium, the band, and the screaming fans. They wait here for a few moments to let Caledonia pass, and the adrenaline is really pumping now as the team begins the walk to the stadium gate. All around them, fans form a tunnel that the team walks through, and as they reach the gate, they are consumed by the raucous environment. The band is waiting, and the team gathers beneath one of the goalposts, forming a mass of deliriously excited players. Brett Miller stands in front of them, and after a few final shouts, the team sprints through the band as they play the fight song and slap the banner before accumulating near the bench. The national anthem plays, and the Rangers are ready.

7:04- David Riser kicks the ball high into the rainy night, and the game begins.

The Rangers won the game 31-19, thanks to big plays from Brett Miller, Dylan Otolski, and the Ranger defense. Sal Sidebotham had a key interception that propelled the team to victory, and David Riser knocked in a 45-yard field goal. Caledonia was a highly-ranked team, and following the game, the team was deservedly emotional and excited.