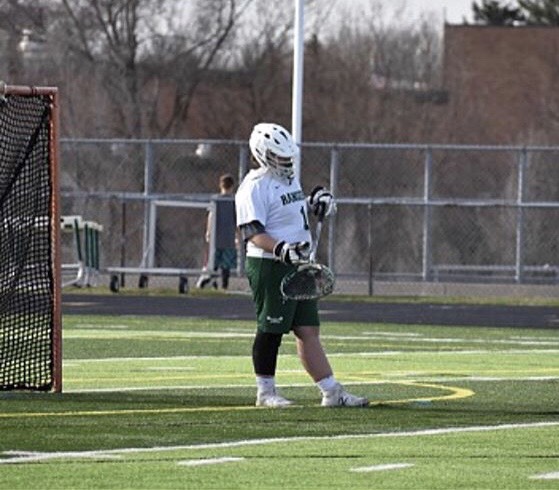 What is your most memorable lacrosse experience?

“The first time I was able to step on a varsity lacrosse field and get that first varsity game feel, it was something I’ll never forget.”

What got you into playing lacrosse?

“My friend [fellow lacrosse player] Carson Deines and I were just thinking in first grade that it might be more fun than baseball, and it was, so my love for the game took off from there.”

Who has been your biggest inspiration in lacrosse?

“My biggest inspiration is [former coach] Tate Ferris because he was the one who truly got me to play goalie, and I just fell in love with [the position] after.”

“Being on varsity as an underclassman is really cool. You get to see how the older guys function, and they really help at practice by teaching us what it takes to play on a varsity team.”

What’s special about this year’s team?

“This year’s team is special because we all know we lost some major talent and key players, but that just makes us work that much harder to win a ring.”

What made you want to play goalie?

“I became a goalie when Carson and I split time [at goalie] in seventh grade, and I saw he was very good at attack. Because he was so good, I told him I would play goalie so he could play attack all game, and I fell in love with it from there.”