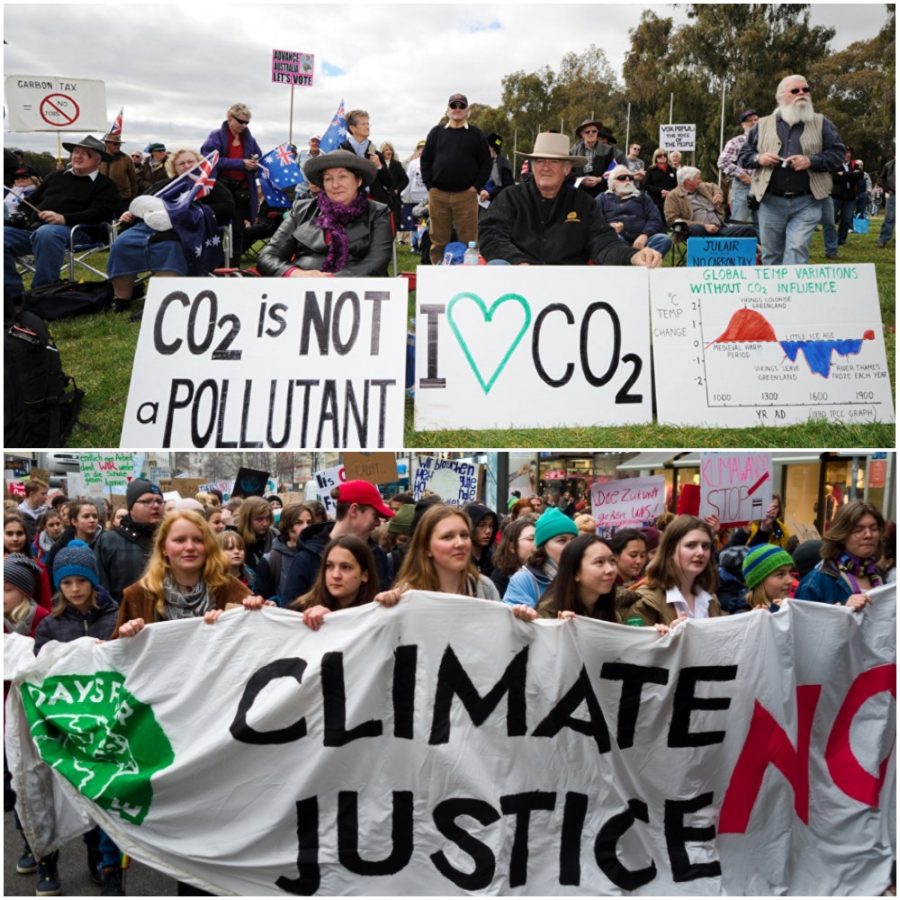 Congresswoman Alexandria Ocasio-Cortez tends to her garden plot on Capitol Hill. National Resource and Defense Council member John Kerry speaks about the Green New Deal proposal and climate leadership with Senator Ed Markey. Mobil Oil advertises in the New York Times and Washington Post that “the science of climate change is too uncertain.”

The environment affects and is affected by every aspect of life in every corner of the world. In both political and social circles, the words “climate change” have been steadily rising from hushed whispers to defiant shouts.

But as common as the words have become, their effects in every part of our lives are still heavily debated.

“It’s okay to say climate change isn’t happening unless maybe you live in Miami and you’re dealing with flooding all the time,” AP Environmental Science teacher Chad Scholten said. “Unless it’s right there in your face, it’s easy to deny it. So I think for those who don’t see it firsthand, it’s easier for them to deny. Where maybe if you are on the front line, so to speak, and you can actually see examples of it, it’s probably going to be much harder for you to deny it.”

The modern world has taken leaps and bounds away from the old ways of living in deep, conscious connection with the environmental world. We are now able to live in a way that is more distant from the natural world; however, we are still largely affected by the environment.

“There’s a famous John Muir quote that sums this idea up nicely: ‘When we try to pick out anything by itself, we find it hitched to everything else in the universe,’ ” Geology and AP Environmental Science teacher Joseph Spadafore said. “It’s easy for us to lose the connection we have to our planet, but we should realize that everything we take for granted can ultimately be traced back to Earth in some way. It sustains us, and one small change can have a drastic effect somewhere else down the line.”

Those “changes,” both big and small, have been spoken about for generations now. And their “drastic effects” are beginning to be more widely accepted.

For Spadafore, the rate at which the Earth is changing is the truly alarming aspect.

“I support the data that shows Earth’s average global temperature is currently changing at an unprecedented rate, and that the current warming trend we observe is the result of human activity,” Spadafore said. “Earth’s climate has constantly changed over millions of years– we have records of periods where the Earth has been much hotter and much colder. But it’s the speed at which the average global temperature is changing that is cause for alarm.”

His sentiments were seconded by Geology student Susan Toppen.

“A changing earth is completely normal, don’t get me wrong, but it is the rate at which we are changing which is alarming,” Susan said. “Global temperatures are changing in the past hundred years as fast as they changed over a course of thousands to millions of years. This is not change to be taken lightly or normally. We need to act quickly.”

However, there are those who hold a different opinion when it comes to climate change and the warming of our planet.

“How I see it is that the climate is always going to be changing, that’s just how the world works,” senior Jordan Boltres said. “I don’t believe in global warming just because the media tells us it exists. Just because the earth is warmer than normal doesn’t mean it’s going to continue that way. It could go through years and years of hot temperatures and then go through a pattern of cold climate. You never know how or when it is going to change, and right now just because it’s hotter, doesn’t mean the earth will permanently stay that way.”

Others challenge opinions like Jordan’s by asking to see the science that disproves climate change.

The interweaving of environmental science and politics presents a complex problem for both the scientific and political world. Society also makes an appearance in the equation and complicates the situation further.

“The difficulty in changing our environmental policies on a large scale makes things move slowly in the United States,” Spadafore said. “Our lifestyles demand more stuff, always at the lowest prices. Any large-scale change will require a change in our standard of living. There are many ways in which we are beginning to move toward greener policies; however, the climate issue is extremely complex and won’t be solved by one single change. The lack of a one-size-fits-all solution means that it will take time to address.”

Steps must be taken both in political and social spheres to ensure that proper change is made. Scholten believes that that change is going to come from how people spend their dollar.

“I always say ‘You’re spending dollar is more of a vote then when you go to the polls,’ ” Scholten said. “What you’re going to purchase, where you are going to spend your money, votes more than what you do at the ballots.”

For Spadafore, the instruction of students in environmental sciences and sustainability is a key way to invoke the change he wants to see.

“I would hope that students who become environmentally conscious would apply their knowledge in any way, no matter how small,” Spadafore said.

What it seems everyone can agree on, though, is that it will be up to the students currently sitting in classrooms across the nations to cement the direction our society or politics will take.

“A more educated society can make better-informed decisions, regardless of the topic,” Spadafore said. “Along with an understanding of the natural world comes the benefit of acknowledging the connectedness we share with our planet.”