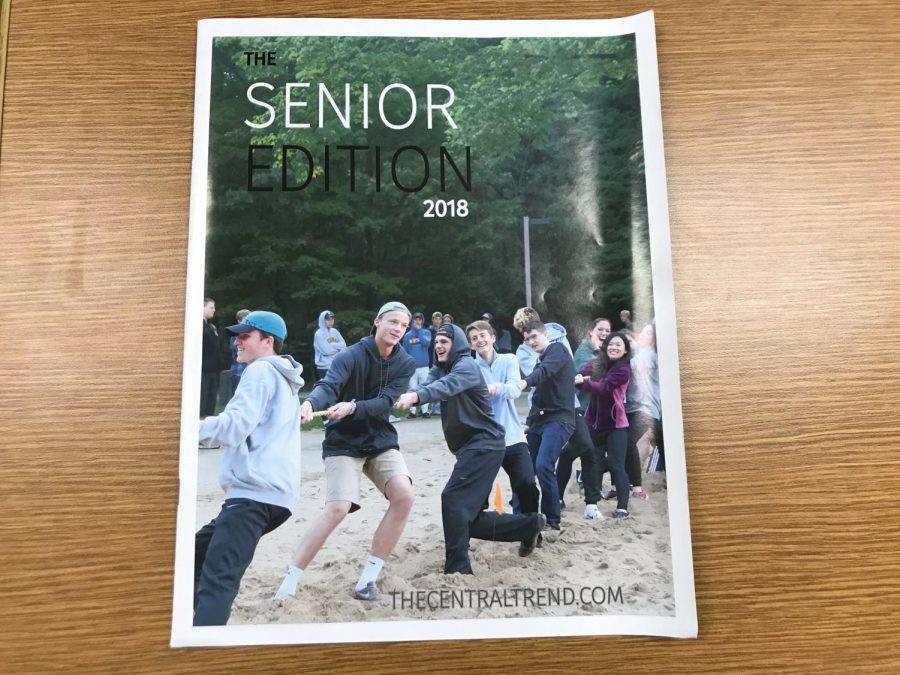 At a football game earlier this year, senior Will Cammell and his camera focused on senior Dylan Tucker as intensely as Dylan concentrated on the task at hand. Channeling all the seriousness he could with a camera in his face, Dylan ate his Chicken McNuggets. In post-production, Will couldn’t help but put his favorite shot in slow motion.

“The experience [of making the senior video] for me so far has been extremely fun, stressful, and eye-opening,” Will said. “I’ve had the opportunity to talk to a lot of people that I don’t usually talk to through the interviews. It’s made me realize how talented, creative, and motivated our class is.”

When Media Communications teacher Jeff Manders approached Will and senior Jake Lenderink about taking an independent study with him, they both agreed and have since used that time to work on the traditional senior video.

“I think both Jake and I thought it was an honor and a fun challenge, so we both just went for it,” Will said.

Since October, Will and Jake have been crafting this fifteen-minute video. They split it into three categories: fall, winter, and spring. Each season will be allotted about five minutes in which Will and Jake will attempt to showcase months’ worth of memories.

Although, there is a misconception that the video is created in its entirety by Will and Jake solely. It is actually more of a group effort. They pull clips from footage recorded by members of FX this whole year. Then, they interview a handful of students and edit it into the video that will premier at the candlelight ceremony.

“I’ve given a couple of my friends in FX a sneak peek of it,” Will said. “Seeing them watch it and tearing up is a really good feeling. You felt like you’ve done your job. It’s never felt so good to make someone cry.”

And that’s the goal. The video is meant to remind the seniors of all the good times they have had this year before they all go their separate ways. Without it, the tears, laughs, and sense of togetherness might be lost.

“I think it’s important to the seniors because it gives them one last look at their experience in high school,” Will said. “It’s almost like a window into the past, and I think people really appreciate that.”

The senior video isn’t the only media format to help seniors reminisce. The yearbook has the same intention in mind but on a longer time scale.

“It’s one of the only things you’re going to have to remember this year,” said senior Sam Noonan, who co-editor of the yearbook along with senior Jordan Boltres. “When you’re old and bored and remember kids from high school, you’re probably gonna end up looking through your old yearbook. It’s just a really nice collection of memories to look back on.”

But, creating the yearbook hasn’t been without its struggles. Only one person in the class this year had done the yearbook in the past. The group as a whole lacked knowledge and experience, but they have come a long way. They have learned graphic design, writing journalistically, and photography.

Yet, yearbook hasn’t been all work and no play. By overcoming these problems together, they have grown closer.

“I’ve made so many great friends that I wouldn’t have otherwise, just incredible people who I love dearly,” Sam said. “They’re all just a big bunch of my best friends, and we support each other no matter what. As cliche as it is, we really are a big family.”

This can be seen on Sam’s favorite page in the yearbook: the staff page. He thinks accurately showcases the class in all of its hilarity and antics. Sam also thinks he will look back on all the great quotes and memories on the page the most out of any of them.

“The school would be missing a lot of fun [without the yearbook],” Sam said. “We cover everything from sports to class events to whatever you could possibly think of. Yearbook’s gotta stick around for all the memories saved in it.”

Nevertheless, The Central Trend also partakes in the end of the year’s senior-centered media rush. It is their once-a-year print magazine called The Senior Edition.

“I think The Senior Edition is really well received because of the anticipation and excitement that precedes it,” said senior Reena Mathews, who is one co-editor of The Central Trend along with seniors Nisha Rajakrishna and Susannah Bennett. “The Senior Edition has long since been a beloved tradition for FHC that seniors look forward to every year. “

The Senior Edition has a wide range of pages focused on individuals in the senior class. Every year it contains Mock Elections, Senior Confessions, and a web of stories that connect every senior, just to name a few. The staff has been working hard on it since February while also staying on top of their regular stories.

The Senior Edition, like the senior video and the yearbook, is created in honor of the good times that seniors wish they could relive.

“It just comes at a time when seniors are really looking for a way to reminisce and reflect,” Reena said. “The Senior Edition provides that in a really fun and heartfelt product.”