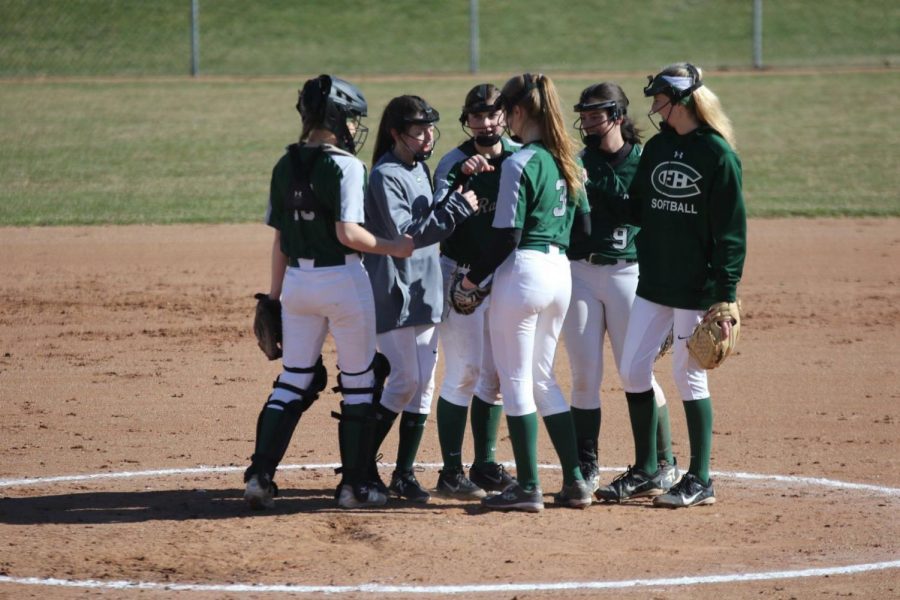 Sophomore Kylie Halverson hit a huge double in the seventh inning of the second game, driving in 2 runs. Her double helped the Rangers close the gap, but FHC couldn’t drive in the last run and lost by 1 for the second time last night.

“When I was batting, I was very nervous,” Kylie said. “I had a weird swing one the first pitch, so I knew this swing had to be hard. It felt amazing to hit the ball because it drove us closer to winning.”

Unfortunately, the Rangers just fell short in the end. They lost the first game 8-7 and the second game 5-4. Despite the score, the Rangers showed the unity of the team.

“Even though we lost, we were working as a team,” senior co-captain Molly Donovan said. “We played well, and I feel like we’re now closer as a team because of these games.”

The Rangers had a solid fifth inning in the first game. Senior Emma Davis started off the scoring streak when she was walked. Junior Jordyn Carlson was also walked, sending Emma into scoring position. Senior Val Nuffer then singled, setting up both Kylie and senior Lauren Mittlestadt to drive runs in. FHC was able to score on some wild throws from the Crusaders and take a 5-4 lead.

“In the first game, we had a spark of energy in the last couple of innings,” head coach Jasmine Watson said. “The girls really came together and fought hard.”

Unfortunately, the Crusaders put up 4 runs in the top of the seventh inning, and 2 runs for the Rangers in the bottom half were not enough for the win. Kylie, Lauren, and senior Zoey Guikema led the team in RBIs, each having 1.

“We had some really costly errors in the top of the seventh,” said Molly, who went 1-2 with 2 walks and 2 runs scored. “They hit the ball well, but we definitely didn’t help ourselves and allowed them to put up those 4 runs.”

In the second game, Unity Christian started with a 3-0 lead. Neither team scored for four innings, and the Rangers weren’t able to score until the sixth and seventh inning. Molly and Kylie were huge for the Rangers in these innings. Both Molly and Kylie singled on line drives, they were also both able to steal, and Kylie was eventually able to score. Kylie had a huge hit in the seventh inning to score both Lauren and Val, and Molly was able to keep the inning alive with a base hit up the middle. Sadly, FHC lost the second game by 1 as well.

Kylie led the team in RBIs with 2, while senior Tori MacLeod and Molly each had 1. Junior Maizey Szczepanek and Kylie each had a double as well.

“I was proud of how the girls stayed in the second game,” Watson said. “They stayed in the game even though we were in a scoring drought and down by 4. They came together and that’s all I could really ask for.”

These games don’t go towards the Rangers’ OK White conference record, but it does change their overall record to 6-6. On Saturday, FHC will be facing off in the Holland tournament in Holland.

“I don’t really feel terrible about losing these game,” Kylie said. “These games will help us throughout the season and have definitely brought us closer as a team.”