Brampton’s Own lacked the climactic action I was hoping for 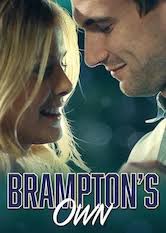 At the age of 30, what should life look like? Should children, spouses, friends, and homes be in the picture?

In the cliche movie Brampton’s Own, none of these things are present in the life of 30-year-old Dustin (Alex Russell). As his 30th birthday is upon him, he reluctantly moves away from his struggling career in Minor League baseball and back to his hometown, Brampton.

After many years of training, practicing, and commitment to the baseball team the Tacoma Rainiers, Dustin’s opportunity to get pulled up to the majors never happens to come his way. After much thought and convincing from his mother, Dustin travels back to the small town of Brampton where he grew up and fell in love for the first time.

As he gets back in touch with his old friends, his first love Rachel (Rose McIver) enters his life for the second time like a boulder weighing on his mind. As she plans to get married and raise a family, the return of Dustin creates a classic, cheesy love story that the film sets the entire focus around.

As the film played on for about an hour and a half, the plot became more and more predictable as each moment passed. Although the acting was quite decent and emotions could be felt through the screen, the purpose of the movie was still completely unknown to me.

As I glanced down at the slow, red time bar at the bottom of the screen, I saw that there were ten minutes left in the film, and I suddenly became utterly confused. There seemed to be no climax or main point, and there was a huge lack of major conflict. For the entire duration of the movie, I was waiting for a scene to lure me in, but that time never came. As the closing scene looked me in the eyes, it seemed as if the whole movie was just a set up with no actual plot, leaving me quite unsatisfied.

From the moment Brampton’s Own began to play, the similarity to A Christmas Prince was nearly impossible to not notice. There were extremely similar scenes where it felt as if I was almost watching the same movie over again.  Aside from the fact that Rose McIver started in both sappy films, the plot line barely contained any differences. Both love stories failed to stray from Netflix’s constant, cheesy romance toward originality.

At the ending of the movie, my disappointment greatly outweighed my enjoyment of the film. The lack of climactic action left me wanting something more, but suddenly the screen was black.

After spending an hour and a half watching Brampton’s Own, I can confidently say that it was a complete waste of my time.