The Central Trend • May 3, 2019 • https://thecentraltrend.com/64611/uncategorized/taco-tuesday-filmfest-preview-qa/ 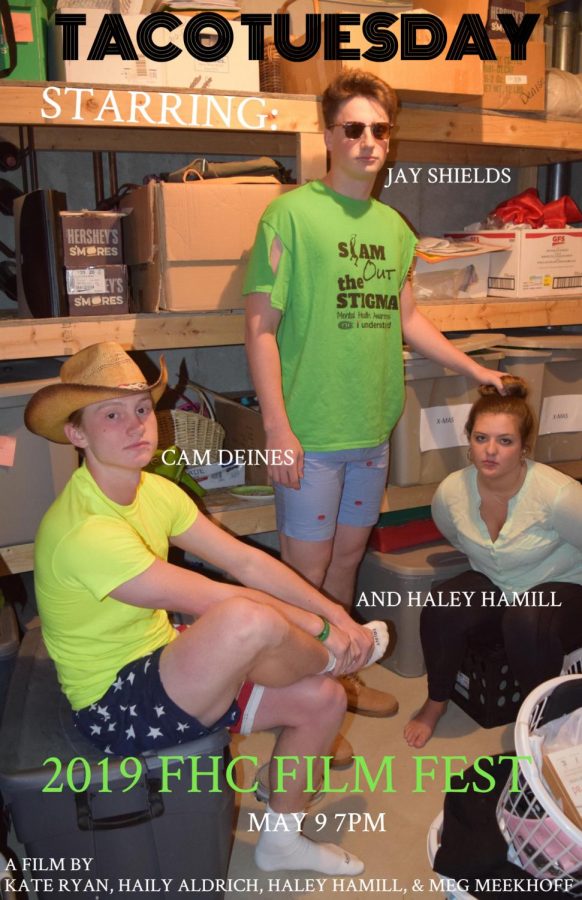 1. What’s your film about?
“Our film, Taco Tuesday, is about two boys named Skip and Chester. Skip is obsessed with Taco Bell and desperately wants a job there. The owner does not want someone like Skip working there though. Skip takes this rejection the wrong way and kidnaps the owner of the restaurant, Tatiana Bell. The boys beg for the secret formula and eventually end up getting it. What they do with the formula will shock you.”

2. What’s the theme of your film?
“[The] theme [is] something like using non-traditional ways to achieve what you want.”

3. What was the inspiration for the film?
“Kate and I came up with the idea of this movie after watching an episode of Big Mouth on Netflix. We knew we wanted to do a comedy, and we just came up with it completely on the spot!”

4. Can you describe the filming/editing process?
“The filming process was much easier than last year. Our main characters, Cam Deines and Jay Shields, were very easy to work with, and they followed instruction very well, which was a big relief. The editing process is the most fun part, in my opinion. We get to go through all the shots and put it all together. You really feel like all your hard work has paid off!”

5. How did you choose the actors/actresses?
“We chose the actors because we thought they would play the role well, and they are good friends with us. They agreed to do it, and they were excited. That is how we knew they would be good!”

6. What was your favorite part about the creative process?
“My favorite part of making any film is always the editing process and the brainstorming process. It is so fun putting everything together for our audience.”

7. What can your audience expect to get out of the film?
“Our audience can expect some great laughs and a lot of twists and turns along the way. We used a lot of fun and modern rap and R&B music. We are ecstatic about showing FHC this film.”

8. How is your film different from the rest?
“I have made many films after being in Manders’ classes since sophomore year, but this one is for sure one of my favorites. Our film is funny, entertaining, and enjoyable to watch.”