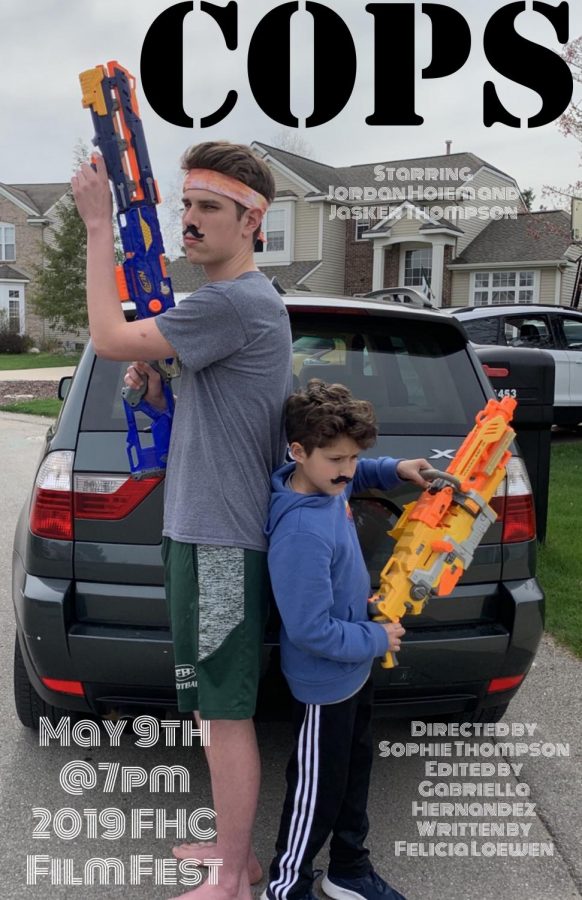 1. What is your film about?

“Our film is about a cop duo who is put on a mission of trying to catch a woman who is illegally importing tortillas.”

2. What is the theme of your film?

“The two major themes would be man versus man and friendship.”

3. What is the inspiration for your film?

“There wasn’t any true inspiration; it was sort of what we wanted to make a comedy and something that would get people to laugh and make them feel uplifted after they leave the movie.”

“The filming and editing process is a lot longer and harder than anyone thinks. Filming can take hours at a time, and we have probably spent a good 12 hours editing our movie; there [are a] lot of little things people don’t think about, [such as] the volume levels, if the scenes flow or not, [or] if the music fits what’s going on in the movie. It’s a very long and difficult process for sure.”

“We have two main actors, one being my little brother and the other [being] a senior here at FHC, Jordan Hoiem. We chose them because they’re both really funny, and we needed someone who wouldn’t be shy in front of the camera.”

“I think my favorite part was seeing it all come together just like we had hoped for when writing the script. It’s a really good feeling when the movie [is] done and [turns] out exactly how you wanted, [with] nothing needing to be changed last minute [or] no extra parts needing to be added.”

“The message we were trying to convey was just for our audience to have a good time; we wanted them to laugh and think the movie is just as funny as we do.”

“They can expect to get some good laughs. We think our movie flows very well, and there’s a 9 and 18-year-old as a cop duo, which is already pretty funny with the difference in maturity levels. All around, they should expect to be left with a good laugh.”

9. How is your film different than the rest?

“I think our films [is] different from the rest because no one has a little kid in theirs. And, a lot of people are doing a comedy but with a serious twist to it too, but ours doesn’t have a serious twist. It’s just supposed to be funny the whole time.”