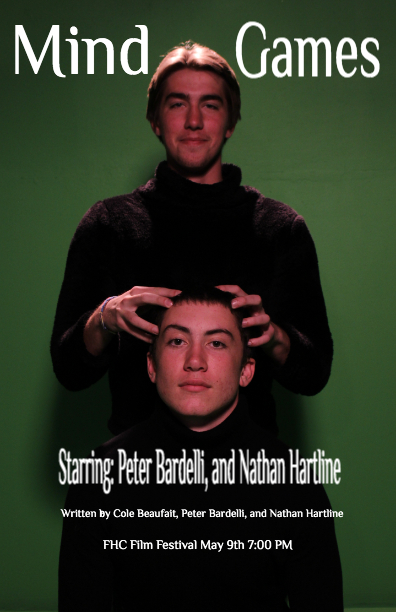 “Our film is about two best friends, and one of them gets the power to read minds.”

“It’s a comedy, but they also learn lessons about being mature and using what they obtain for the right reasons.”

“It kind of just came to me; I didn’t really have an inspiration. I thought it would be a cool idea and that I could do a lot of funny stuff with that. I also felt like the concept would be intriguing for the audience.”

“It was a really long process. There were a lot of times when it was annoying and difficult. There were some shots we redid, some we didn’t like at all. Memorizing lines and getting a lot of shots was difficult. Putting all of the shots all together was what made it so long.”

“Nathan and I star in it, and we’re the ones who made the film. We didn’t want to have to go through the struggle to find people to act in it, because they might not care as much as we do and put their full effort into it. We have a few other people in it who were able to come during their fifth hour and film. Otherwise, it’s just me and Nathan.”

“My favorite part about the creative process was being able to work with two of my best friends and film a funny story. We got to mess around, and it was really fun to film it together and make it our own. We think it’s funny and like it, even if other people don’t.”

“The audience can expect a lot of laughs. It’s a fun film; it’s not meant to be super serious. It’s upbeat, funny, and something you will enjoy watching. While being fun, it conveys a good message.”

“There’s not a lot of comedies being made this year. Ours is one of the only movies that is mainly funny. Nathan and I are premier actors; we are the best of the best. You don’t get the high-quality acting in our film in the other films.”