Bridges all fall down 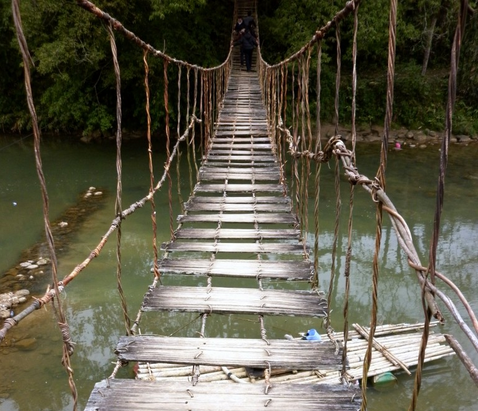 Over the peculiar pebbles, ones of varying shape and size, she stumbles; her feet fight to stay balanced, begging the ankle for simple stability.

Yet the exhaustion kicks in.

That never-ending, relentless exhaustion takes over. It seizes her body—a shock of electricity. Her skin tingles, shaking in the off-putting air, with the sensations.

Acting as a jar filled with canned curiosity, the wind carries a forgotten winter chill as it passes through the land. Hugging her exposed skin, the wind clings to her, the annoying sibling she has yet to shake as she moves hastily forward.

Odd gusts of those chills speed up, whipping against her skin. On a surprising summer day, goosebumps migrate across her arms, inhabiting what they can.

She is oblivious to this all.

She is oblivious to the world, to the sounds, to herself; but ahead of her, just a trivial distance away, a bridge lays in wait.

With the sun giving way to the moon—a daily ritual early in summer’s painless afternoons—the shadow of the bridge crashes into her failing footsteps. Bars bent, pieces dangling loose, the beaten appearance of the bridge does not deter her from her course.

She stumbles, but she continues.

Forgoing all other thoughts, plans, or ideas, she continues ahead, carelessly crushing the fighting plants below, unaware of her effect. Determination overwhelms her, defeating the exhaustion. Now she marches.

And she still continues on, striving towards the bridge, reaching out with her frail hands until it’s practically in her graceful grasp.

Both tips of her shoes halt right before she can touch it, toeing the line between the motley of rocks and dirt and the start of the metal structure; she teeters between the land and the hold of the bridge, leaning back and forth with the biting gusts as her captain.

Then she takes her first step, egged on by that foreboding wind. And then her second and her third. She doesn’t stop marching forward.

Instinctually, she crosses the invisible border between solid ground and trusting the bridge, not fully grasping what she has done. Placing her feet in a well-practiced line—something drilled into her mind—she marches across the gaps in the bridge, ignoring the signs.

And she stops. Right in the middle of it all, she stops, and she sits.

Creaks of protest from the failing structure fill the air around her as the water underneath begins to slow. Life, for just a faint second, slows as she slips her feet over the edge for them to dangle in the wind. An innate dance, her feet waltz back and forth off the side.

She sets down what she had held tightly in her hands: a rusted pile of used nails—the only ones she could find. The clamor of metal sings into the air. She knows she must use them.

She must try to fix this bridge, the one keeping her from falling so far into the abyss, the one she built. But it is weak.

It is so very weak and used and rusted. She has taken it for granted and noticed far too late.

So now, in the last moment of feverish desperation, she will try to fix it, and she is sorry.