The Central Trend • May 7, 2019 • https://thecentraltrend.com/65030/opinion/reviews/movies/ted-bundy-biopic-extremely-wicked-shockingly-evil-and-vile-provides-a-gripping-performance-and-depiction-of-a-gripping-story/ 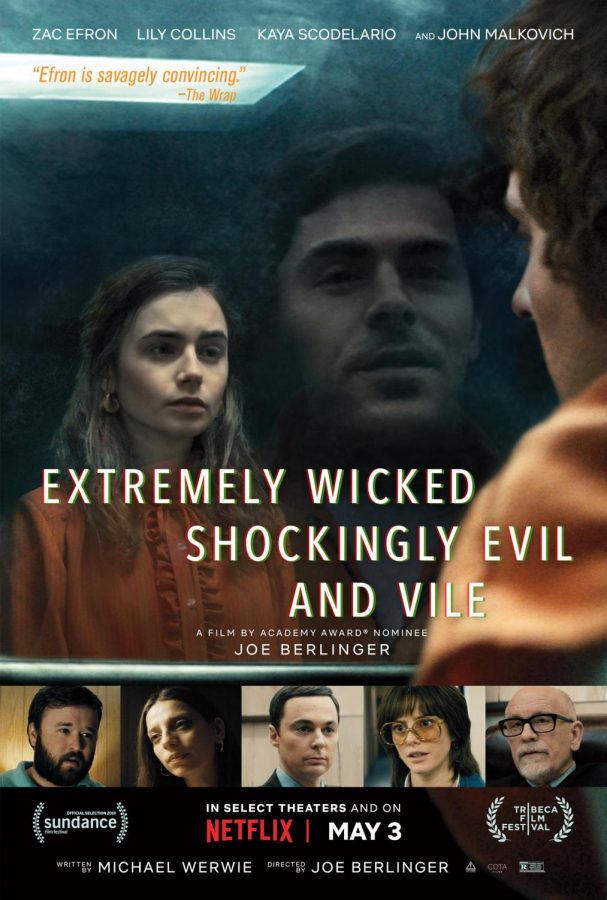 Zac Efron, of childhood idolatry and heartthrob glory, has never been so sinister.

But, I suppose that’s the objective when playing the role of an infamous serial killer.

And in Netflix’s Ted Bundy biopic, Extremely Wicked, Shockingly Evil and Vile, I’d say Efron did a pretty stellar job at it.

Extremely Wicked is the highly-anticipated Netflix original covering the haunting story of Ted Bundy and his murderous conquests from the perspective of his longtime girlfriend, Liz Kloepfer (Lily Collins). And following the release of the documentary-style Conversations with a Killer: The Ted Bundy Tapes, the Bundy-craze was only on the rise.

The public’s long-held and recently resurged fascination with the man responsible for at least thirty murders of women across the country is no surprise, considering the charade of charisma and sincerity that sustained the man’s streak of atrocities and escaped arrest.

Bundy, with the heinous nature of his numerous crimes starkly contrasting with his charming, astute persona, is an enigmatic man who yields unending public intrigue.

And that mystery, that gloom, that peril, is certainly reflected in Extremely Wicked.

The film opens with a jarring, back-and-forth cut between scenes from the night Bundy and Liz first met to years later when Bundy has finally met his fate in prison. It is deliberate filmmaking that sets the tone for the rest of the movie’s chilling tone and feel.

The film adjusts in chronology, smoothly flowing into storytelling from the former setting of Bundy and Liz’s first meeting.

From there, the film does a masterful job of depicting the intricacies of the Ted Bundy story, juxtaposing his loving role as a boyfriend/fiance to Liz and father figure to her daughter and effortless ability to enrapture people and female affection with the heinous details of his crimes and his eerie mask of confidence and cool in the face of trembling victims and jester of courtrooms and media attention. There is true cinematographic prowess behind this that contributes to the riveting nature of Extremely Wicked, with the shifting POV—from Liz to Ted—adding to the film’s grit and texture.

Moreover, the characters and their respective arcs aid in shaping the quality of the film. Bundy, of course, is an intrinsically intriguing character, and Efron embodies this with ease and expertise, putting on a truly skillful and ominous performance. But the women around him, and their awe and loyalty to him, have their own narrative magnitude to offer.

Collins, most prominently, took on the difficult role of the longtime but slowly distrusting girlfriend with absolute artistry. She expresses the slow transformation of devotion to denial to disbelief to despair with a beautiful performance of humanity and subtlety and authenticity.

The movie spans over a wide period of Bundy’s reign, from the early arrests to the building cases to the eventual sentence, slowly unraveling the threads of Bundy’s lies and crimes and relationships. The film—its editing and production and acting and story— entices and enthralls in all angles and dimensions.

And in its horror and barbarity and production and dramatization, it is is easy to fall into the clutches of movie magic and Efron-mania, delving into the film’s narrative with the consoling assumption of its fictionality.

And yet, when the movie ends and the credits roll, actual clips from the movie’s events appear, with the real-life face and voice of Bundy piercing the screen in jolting tangibility.

Because there is no fictionality to cling to, no invalidity to comfort in. This monster reigned beyond the closet; Bundy was brutally real, and so were his innocent victims and the many lives he ravaged.

This truth is more wicked and evil and vile than fiction, and Extremely Wicked, Shocking Evil and Vile captured just that.