The Central Trend • May 13, 2019 • https://thecentraltrend.com/65364/showcase/fhc-alumni-successfully-finish-off-college-in-the-top-1-of-msu-grads/ 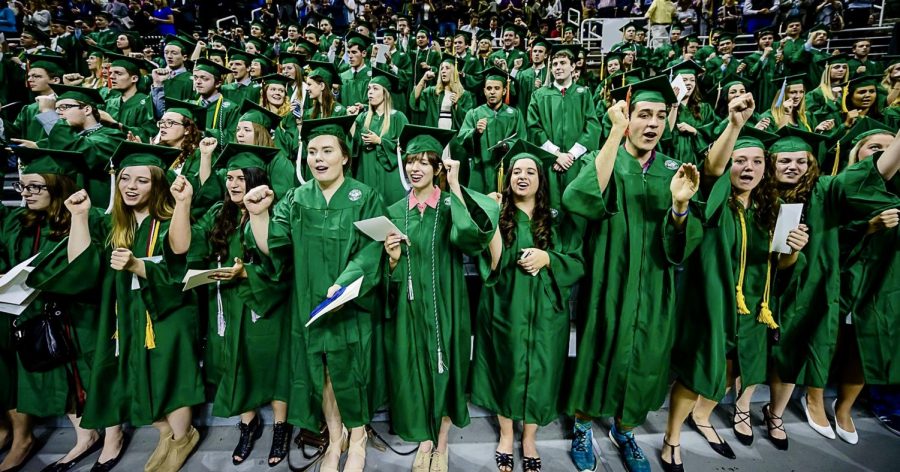 Michigan State University (MSU) has a graduating class of approximately 11,000-12,000 students each year. Out of those thousands of students, only the top one-percent earn a 4.0 GPA, and this year, three of those honorable students were FHC 2015 alumni: Marlee Talbot, Joey Preston, and Tasneem Sannah.

After achieving such an accomplishment, the three have many things to look back on. Among these steps in their path to success was their time spent at FHC.

“FHC provided a really strong foundation for me,” Joey said. “So many people come into college having to relearn so many topics, but I feel that with FHC a lot of my bases were covered.”

A foundation was not all that FHC was able to lend these alumni, however. The copious AP class courses that were offered helped put these graduates ahead in school, and the lessons that FHC teachers instilled in them also led to their success.

“The way that my teachers at FHC taught me to think, engage with learning, and manage my time definitely contributed to the aspects of my personality that helped me graduate with a 4.0,” Marlee said.

However, while FHC may have prepared them to take on college, the grand achievement of a 4.0 GPA was never initially on the three graduates’ goal boards. The original goal was just to work hard and get the best GPA as they could.

For Tasneem, it wasn’t until she realized she could really achieve this arduous task that it became a goal of hers.

“[Maintaining a 4.0] wasn’t really a goal I had set for myself at the beginning of my freshman year because I wasn’t sure how realistic such a goal would be,” Tasneem said. “My goal at the beginning of my first semester was just to do the best I could that specific semester. When I did finish the semester with a 4.0, I thought, ‘Hey, maybe I can keep this up for the rest of my time here.’”

Despite their initial doubts, once the three graduates got that first legitimate taste of the sweetness of a 4.0, the goal sunk itself into their aspirations.

Unsurprisingly, the road to this new goal was not very easy. The challenging objective took ambition, a whole lot of focus, and several other important factors that ultimately led to success.

“The process [of maintaining a 4.0] was very difficult,” Joseph said. “I got lucky sometimes and barely slid through with an A, but overall, I do feel that I earned [a 4.0] and worked very hard to get the grades I got.”

The journey to graduating MSU with a 4.0 also included characteristics that one doesn’t automatically have.

“I had to work for [a 4.0],” Marlee said. “It took a lot of personal dedication, which is something no one could have trained me for or helped me with. It was something I had to bring to the table all on my own.”

There was also the battle every college student faces which these three also encountered: how to balance school life and social life. The balance wasn’t initially figured out when the three students headed to MSU, but after a short time, they all got the scale set straight in a way that worked for them.

“The balance between classes and having a social life took some time to figure out,” Marlee said, “but I managed to make it work. No matter how stressed out I was about a project or exam, I always made sure to find time to have fun or go out with friends, and I think that helped keep me sane.”

Nevertheless, all of the work along the road was well worth the success for Tasneem, Joey, and Marlee. The three initially never saw themselves accomplishing such an exceptional achievement, ending up only making the success that much sweeter, along with the reward to their hard work.

“It is a great honor [to graduate with a 4.0], and it feels very rewarding,” Tasneem said. “I invested countless hours of studying over the past four years to accomplish this feat.”

However, this success is only the beginning of the three graduates’ stories. With limitless aspirations, this achievement will continue pushing them down their own successful roads. Tasneem plans on attending medical school at some point in the future, and Joey will be starting at MSU in their veterinary school this fall.

Marlee—who majored in advertising management and minored in public relations—hopes to begin work in an advertising agency in Chicago; however, she also plans to take the summer to just enjoy the world around her.

“My current post-graduation plan is to enjoy what time I have left before the ‘real world’ fully sets in,” Marlee said. “I will spend my summer traveling, including a month in Australia.”

As successful MSU college graduates, the three FHC alumni have a lot of advice to offer. The three may have been at the same school, but they were all still capable of learning their own lessons to help carry them through their journeys to success.

For Tasneem, the important lesson was to always attend your classes.

“My advice is to try to attend all your classes,” Tasneem said. “I have found that regularly attending class helps you keep up to date with the material, so you don’t have to cram last minute before the exam. It will make your life so much easier.”

From Joey’s perspective, the most important thing is to talk to the people around you, even if it’s something you’re afraid to do.

“My advice is to not be afraid to talk to people in college,” Joey said. “College can be extremely intimidating at times, but if I hadn’t opened my mouth to talk to my professors, classmates, and friends, I would not have made it.”

As for Marlee, the most valuable lesson found during her successful experience at college is to take advantage of every moment.

“As for those of you leaving FHC,” Marlee said, “whether you’re starting college in the fall, learning a trade, or simply starting work, be in the present. Stop waiting for tomorrow. You never know what tomorrow will hold, so take today for everything that it is.”