The Central Trend • May 14, 2019 • https://thecentraltrend.com/65383/showcase/2019-seniors-reveal-their-feelings-about-upcoming-graduation/ 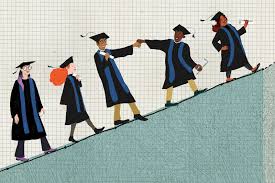 May 21, 2019. This is the day that the seniors will take the final step away from FHC and make the first step towards college. For many, high school has been a rewarding experience, full of friends, memories, and bonds that they aren’t ready to leave behind just yet. For others, the idea of “getting out” excites them, and they find themselves more than ready to make the jump, leaving their high school years in the dust behind them.

For senior Rachael Yoder, graduation seems like a date that looms towards her. Describing herself as a homebody, Rachael has been making efforts to process the upcoming changes in her life yet still finds herself feeling scared for the future ahead.

“I am so scared [to graduate],” Rachael said. “I cry about it. A lot. Being here at FHC has literally been amazing; it’s nice to walk through the hallways and have familiar faces look at me. At college, it’s almost like going into high school again, but it’s a lot different because you’re on your own, and you’re not going to have that familiarity. It’s going to be sad because I’ve been with these people for the past 12 years, and now I’m going to be leaving them.”

She plans to attend Grand Valley State University next fall, stating that she picked the university because of its proximity to home, its great programs, and its beautiful campus. A few familiar faces will be following her, which she says gives her some comfort; however, she knows that the “class feel” of the past 12 years of her education is too special to be replicated.

Even while knowing that she needs a step away from her parents in order to find herself as an individual, she still finds herself yearning for that comfortable familiarity associated with high school to linger just a little bit longer. What she will miss most, she says, are the irreplaceable bonds she has created with students and staff alike as well as the memories she will hold close to her heart during these upcoming months of change.

“[I’m going to miss] the teachers,” Rachael said. “It’s always nice because I’ve really created a bond with all of the teachers and the staff members. Seeing their faces [is something I’ll miss], just like sports events and football games. There are so many memories. There’s not one specific thing that I can pinpoint because they’ve all been amazing. Of course, I’ve had the highs and lows between the testing of junior year and the downfall of friendships; but, in a way, it’s all helped me grow and learn. Looking back at it, it’s all been for the better.”

Senior Kai Hagedorn, however, is looking forward to the next step in his academics. Kai, who plans to attend Michigan State University (MSU), says that he has always been excited to graduate. His decision to pursue MSU stems from familial roots, programs for his chosen major of human biology, and the cost-effectiveness of an in-state school.

“I was super excited to graduate,” Kai said, “I still am. I look forward to meeting new people, tailgating, and the fun stuff like that. But now that it’s literally next week, I’m bummed out but still overall excited to graduate. I think I’ll miss the small scale of [high school]. Everyone knows everyone, and it’s a smaller community that has more togetherness. But, that might be different in college too.”

The idea of looking at college as an exciting new challenge is one that senior Olivia Bunnell also chooses to partake in. Olivia, who plans to attend Western Michigan University for environmental and sustainability studies, has her own opinions about the stigma surrounding graduation.

“I’m excited,” Olivia said. “I’m ready to be done with this place. But I’m interested to see what it will be like next year because I honestly have no clue. I feel like some people are ready for [college], but it’s going to be different than anybody thinks. I think I’ll miss the routine of having the same schedule every day, but I’m also ready for something different.”

She says that leaving for college has been a thought in the back of her mind before she even began high school, but now, the idea of actually moving away seems a bit unknown. Nevertheless, though, she remains enthusiastic about what is to come.

Seeing that kind of enthusiasm is what makes English teacher Kimberly Herr’s job one that has continued to remain interesting over many years. She remembers high school and graduation vividly and uses this to keep senior’s mindsets in mind and to relate to them as they look ahead towards college.

“All that excitement that I remember like it was yesterday…I get to see in all of [the seniors’] faces every single day as we move through the year,” Herr said. “From the first day we start, which is the most exciting day of their high school career, to getting down to these last very bittersweet days. They want it to go by fast, but they don’t because all of a sudden they’re rushed with the feelings of ‘Oh my gosh, this is almost over.’ It becomes kind of bittersweet for them, and it’s refreshing to see that every year, over and over again.”

The feeling of being rushed is one that Rachael has been grappling throughout the duration of her entire senior year.

“Senior year does go by quickly, but I feel like it doesn’t go as quickly as some of the people above us told us that it did,” Rachael said. “[It’s important] to really live in the moment during your senior year: go out and do all those fun things that are available to you. Don’t hold back.”

Within feeling like she is running out of time, Rachael uses her seniority to remind underclassmen that participating in high school activities is worthwhile and important, especially since these kinds of opportunities do not last forever.

“If you’ve never gone to a basketball game, go to that basketball game,” Rachael said. “If you’ve never gone to a play, go to that because soon you’re not going to have that ability to do those things; you’re not going to be in high school anymore. Soon enough, your parents are going to be dropping you off at college. Some people don’t realize that. They’re so ready to get out of high school and grow up, but it’s going to hit you harder if you don’t really process what’s going on along the way. Everything is your last [during] senior year, so you just have to enjoy it.”

Cringing as he finds himself repeating yet another cliche about enjoying the time while it lasts, Kai, reluctantly, agrees. He says that it’s true, four years of high school aren’t actually as long as they feel; trying new things, as scary as it is, is the best way to make the most of the years leading up to college.

Olivia, on the other hand, has her own advice for students who still have time left in high school and says that it’s important to note that everything can change. Planning everything is great, but doing it too early is not always as beneficial as it may seem.

“Don’t think about [college] too hard,” Olivia said. “There are some sophomores and juniors who already say, ‘Oh, I know where I’m going I’m going to major in,’ but that can completely change. That completely changed for me. Just go with the flow and wait for [things] to happen.”

No matter how things play out, though, the 2019 seniors have left their lasting mark inside the walls of FHC. Herr attests to this, stating that this year’s senior class has been one of the best in attitude, pride, and, most importantly, in kindness.

“I just love that [seniors] are ready to take their wings and fly, and [I love] getting them ready for what’s ahead next year,” Herr said. “I loved [this year’s senior class] as juniors, and I am very fortunate to have had a lot of them again as seniors. They’re funny, and they’re kind to each other, which is really really a breath of fresh air when you look at big classes. They’re just a good, cohesive group. They have phenomenal students in their midst, and they’re just one of those really golden group of kids.”