The Central Trend • May 15, 2019 • https://thecentraltrend.com/65581/opinion/collective-punishment-in-classrooms-is-toxic-to-adolescent-growth/

Collective punishment in classrooms is toxic to adolescent growth 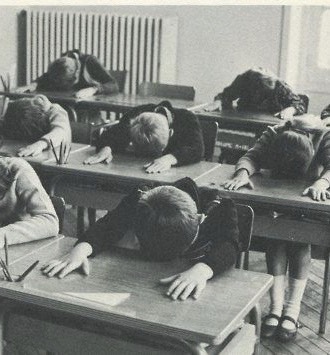 I distinctly recall walking through the doors of my elementary school one afternoon in the midst of recess and passing by a series of glass windows. In the hazy reflection of the windows, the faint image of twenty or so of my classmates trudging along remained temporarily imprinted. Twenty or so sunken eyebrows. Twenty or so bleak glares.

Each disappointed footstep was accompanied by heavy sighs that replaced the mandatory silence. But why was this silence mandatory? Why was such a young, spirited group so sullen? So dejected?

In the aftermath of a coarse collision between two students, my teacher consequently decided to punish the entire class. Even though the majority of the children idly wandered the playground that afternoon, everyone had to leave recess early because we “couldn’t handle it.” Thus, the march of disappointed footsteps and dismal glares had begun.

Although a shortened recess didn’t signify the end of the world, it was confusing, annoying even, to be punished for someone else’s mistakes. And although this situation occurred almost a decade ago, similar scenarios have repeated themselves in classrooms over the years, and they still continue to repeat themselves.

Now, however, this isn’t an issue of ending recess early anymore. Now, in high school, collective punishment can be expressed through forms of additional assignments, extensive lectures on moral, and, sometimes, misdirected discouragement and disappointment. The consequences have become more grave with age, subsequently furthering the gap between collective punishment and the necessity of it.

It’s simply unfair to those who are honest and diligent to be bogged down by lectures and assignments about what they’re “doing wrong” and why “their” actions are immoral, shameful even. When in reality, the majority of the students are most likely doing just fine.

Many further argue against this issue because of the waste of time extra assignments and lectures create, that an essay written on the lack of integrity steals time away from the standard curriculum. Although this is true to an extent, it is more significant than a mere case of theft. Collective punishment not only risks damaging time in class but charisma and confidence in often unsteady, growing youth, as well.

After several hours of studying and time spent working on homework assignments being lectured on the fact that the class isn’t trying can wrongfully inflict feelings of ineligibility. These comments ultimately decrease the desire to try and learn in the future. Why study for hours to only to be deemed as an “undedicated” student?

Such snide comments herd students into one assumed category. Rather than speaking to students personally, these actions reflect diminished inquisition and unawareness of individuality on the teacher’s part.

It forgoes any attempt to understand the personal endeavors of students and their own definition of success, which comes in varying forms for different people. It also ignores the fact that many students may be suffering from more significant issues outside of school that may be the factor causing imperfection.

But if a student is truly honest and hardworking, these comments shouldn’t affect them, some people say. Why should a lecture hurt students if they’re certain in themselves and their work?

Is society too soft? Is this generation of people not able to handle criticism or know where it’s directed? Why can’t those who are doing well ignore the punishment?

The fact is that not all people, especially young students, are necessarily certain in themselves. By imposing collective punishment, it risks planting doubt into minds, which leads to cultivating a sense of uncertainty.

Assigning an essay or scolding a group of students in school isn’t necessarily a war crime, as collective punishment in its literal definition was defined in the Geneva Convention in 1949. But it is still a salient issue when regarding the growth of young students.

Collective punishment wrongfully bruises confidence and self-awareness. Teachers should foster communication and understanding, rather than assume actions and criticize kids based on those assumptions.

We should seek for the root of problems and solve them, rather than simply throwing everyone under the bridge as a solution. Because when teachers use collective punishment as a form of resolution, they aren’t necessarily solving anything; they are simply expanding on a problem and claiming it as fixed.