The Central Trend • May 17, 2019 • https://thecentraltrend.com/65741/fx-student-news-show/sports/jackson-clay-and-carson-deines-combine-for-10-goals-as-boys-varsity-lacrosse-takes-down-detroit-catholic-central/ 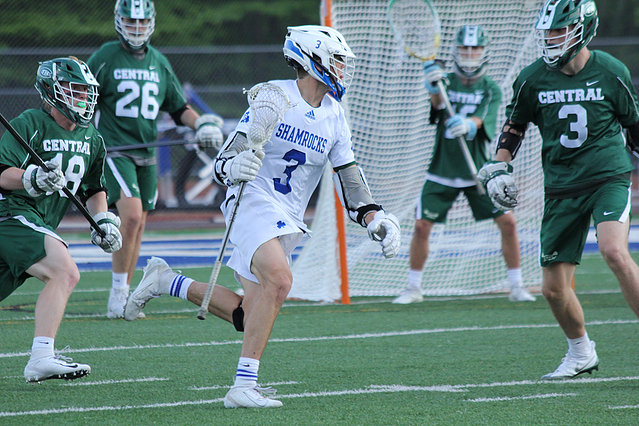 In a matchup between two of the best teams in the entire state, junior Jackson Clay and sophomore Carson Deines combined to score 10 goals en route to a 12-9 win for the Rangers over the Detroit Catholic Central Shamrocks.

This game put two very similar squads up against each other. Coming into this game, FHC and DCC were ranked second and third in the state, respectively. The Shamrocks have played many of the same teams that FHC has played this year. For example, they are coming straight off of a 17-9 win over Rockford that was very similar to the game that the Rangers played against the Rams.

DCC also had dominating wins against Orchard Lake St. Mary’s, Forest Hills Eastern, University of Detroit Jesuit, Cranbrook, and East Grand Rapids, just like FHC did. Also, the lone blemish on both of the teams’ records were losses to Brother Rice, with DCC losing twice en route to a second place finish in the Catholic league. In summary, the two teams have very similar resumes, so the Rangers were expecting a very tough battle.

At the start of the game, the Ranger offense looked as good and efficient as they ever have. With penalties hurting the Shamrocks, the Rangers took advantage of the man-up opportunities and got off to a quick 6-1 lead at the end of the quarter. Jackson and Carson each scored in the first and looked like they picked up right from where they left off against Orchard Lake St. Mary’s.

However, with an impressive resume and roster like DCC has, the Shamrocks were bound to make a run. In the second quarter, they did exactly that as they went on to score 6 unanswered goals. Throughout the quarter, everything looked out of sync for the Rangers. The boys were suffering penalties, taking bad shots, and the defense was struggling.

“The defense didn’t help each other out and slide on time [in the second half],” Head coach Andy Shira said. “We were leaving [senior goalie] Jack Nolan out to dry.” As much as the defense struggled, so did the offense. The Rangers failed to score a single goal in the second, and they entered the locker room down 7-6.

There was an extended halftime due to Thursday being Senior Night for the Shamrocks, so the Rangers were able to recuperate and talk about what went wrong. In the second half, the Rangers played much-improved defense and started to execute better offensively.

Jackson would end the game with 6 goals, and Carson did more than pitch in with his 4 goals. Not only did Carson score four times, but he also assisted teammates on two separate occasions. Joining him in the efficient distribution of the ball was senior Luke Majick who continued his impressive assist numbers with four more on Thursday. Jack Nolan made 9 saves throughout the game, and the FHC defense only gave up 2 goals in the second half. Both sides of the ball rode the momentum to a final score of 12-9. Two of the FHC goals came in the final minute, which closed out the game,

With another huge win added to their already-impressive resume, the Rangers finish the regular season with a 16-1 record with their only loss coming to Brother Rice. The boys will start their playoff run on Monday at home when they take on the Comstock Park Panthers. The Panthers enter this game with a 6-10 record and are fresh off a 12-6 win over South Christian in the first round of Regionals.