The Central Trend • May 21, 2019 • https://thecentraltrend.com/65931/fx-student-news-show/sports/girls-varsity-soccer-clinches-ok-white-conference-championship-with-a-commanding-8-0-win-over-greenville/ 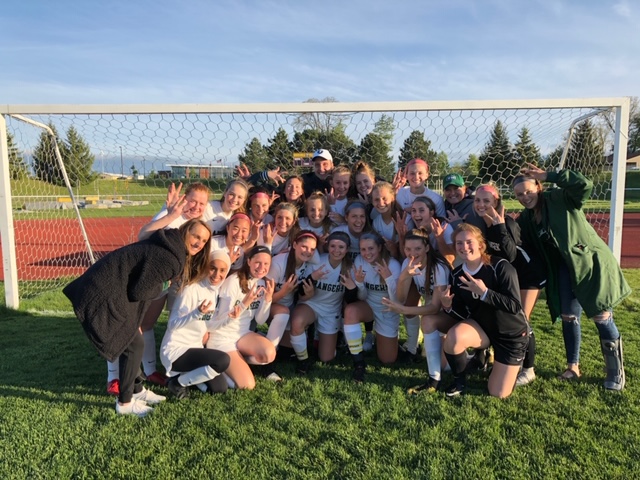 Coming off of a big win against Lowell last Friday, the girls varsity soccer team shifted its attention to the final regular season match of the year against the Greenville Yellow Jackets. The team succeeded and beat Greenville 8-0 in convincing fashion, also winning the OK White Conference championship.

Senior Kaitlyn Pointkowsky got the team started off on the right note, scoring 2 goals in seven minutes. The first one came with a cross from freshman Lauren Koczenasz that Kaitlyn finished inside the box, while the second bounced off of a Yellow Jacket defender to Kaitlyn, who easily put the ball in the back of the net. Just three minutes later, senior Megan Pointkowsky scored her first goal of the game off of an assist from senior Ashley Ward to give FHC a commanding 3-0 lead.

Ashley would go on to assist another goal a couple of minutes later with a cross to Lauren, and the freshman finished it smoothly with a nice shot that hit the back of the next. Ashley later put in her first goal of the game off of a rebound from Kaitlyn and a pass inside the box to extend the Lady Ranger lead to 5-0. Kaitlyn had another great pass five minutes later, this time to junior Jordan Helmbrecht, who had another nice finish in the half. FHC went into halftime up 6-0 on the Yellow Jackets.

FHC has now finished the regular season with a 16-2 overall record and 11-1 in the OK White Conference, which is the program’s fifteenth consecutive conference title. The Lady Rangers now take on the 5-7 Grand Ledge Comets in the first round of district play.