The Central Trend • May 28, 2019 • https://thecentraltrend.com/66259/showcase/the-elementary-school-walkthrough-allowed-seniors-a-chance-to-reflect-and-reminisce/ 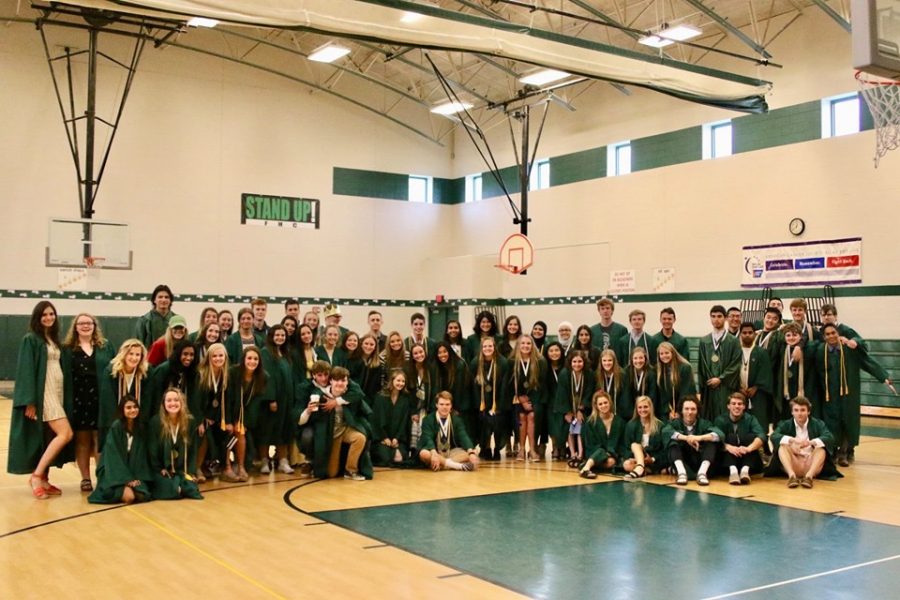 Senior Gabby Hernandez was overcome by bittersweet nostalgia as she walked through the halls of Pine Ridge, the elementary school she grew and learned in, one last time. It sparked one memory in particular.

“I will always remember when I was in third grade, and I had Mrs. Dixon, who set up a ticket system to win prizes,” Gabby said. “I won the Kermit the Frog puppet, and I loved that thing so much. My mom threw it away a couple of weeks later because I was too obsessed with it. I cried for at least a month.”

Discovering almost forgotten memories like this one was the reason she went back in the first place. Along with almost sixty other students, Gabby took in the halls and classrooms of her past and spoke with beloved teachers once more.

Last Monday, Gabby just wanted to relive her early childhood one more time before she graduated.

“[The walkthrough] was the last time we were all at the school together as students,” Gabby said. “To me, it signified moving on and letting go while still remembering our past, to remember who we are and where we came from to move on to our next big move.”

And saying goodbye to the friends and memories is something that will be equally hard for senior Tess Bond.

“I think the thing I will miss most about high school is the community,” said Tess, who went to Thornapple Elementary School. “This year my class became united and always had each others back. I think this next chapter will be filled with unfamiliar faces, and I think I will miss that comfort of being with people that constantly supported one another.”

The community Tess refers to is the one that can only be created by spending copious years together. The class of 2019 all came together under one roof for the first time in fifth grade, all the students from the three feeder schools finally mingling.  For the next seven years, new relationships were formed, and the class became more unified.

“I think we all grow so much from the age of six to eighteen,” Tess said. “I learned what it is to be a good friend, how to be a hard worker, and how to enjoy the simple things life has to offer. Every day, I learned something new whether it be about World War I or a life lesson that I will carry with me for the rest of my life. I think I’m a lot more knowledgeable, not just about academics, but about life itself.”

Indeed, because of this, Tess wanted to go back to her elementary school to thank the faculty. Whether they were just teaching addition and subtraction or the “golden rule,” they play a salient role in the lives of every student. They deserve to know this and to feel their students gratitude, elementary teachers in specific.

“Elementary school is such a monumental part of growing up,” Tess said. “You absorb so much information that you will carry for the rest of your life. It is your first time out on your own without your parents, and you learn how to be a loyal friend and how to truly make fun in any situation.”

Senior Noah Stout echoes this idea and stresses the importance of the early education children receive during their elementary years.

“Elementary school is less about teaching math and reading as it is about teaching curiosity,” Noah said. “I think that is something most people fail to see, but it is a concept that I have always believed in. Elementary school should make kids want to learn, and for me, they succeeded. I loved going to school because I knew that I would be surrounded by people who were fun and loving. That desire for learning was something that stuck with me throughout high school and is a quality that will never be taken away.”

However, many things have changed since elementary school. Going back, the seniors were all astounded by how small the children were. They, Noah included, had trouble fathoming just how much their perspectives had changed without even noticing.

“When I went back I was caught off guard by how small things had gotten,” Noah said. “The cafeteria was a measly 8 tables and barely larger than a typical high school classroom. It was no longer the grand food hall that I remembered it being. Similarly, the media center had shrunk, and the gym, too. I knew that it wasn’t the rooms that had shrunk, but that I had grown. Nevertheless, the illusion was fascinating.”

Looking around and down at the kids with this new view, Noah realized that the trip back to elementary school was as much the kids as it was for him. It may have been a trip back down memory lane, but it also was a preview into the future for the kids.

“I will always be a member of the Forest Hills community,” Noah said. “However, this walkthrough was a way of passing the torch to the next generation of Rangers. I feel like the walkthrough was meant to inspire the younger students. They looked up at us with curiosity and wonder. This event was as nostalgic to me as it was inspiring to them. They will grow up with the belief that they too can achieve the wondrous things that we graduates have, and they will know that there are no bounds for what they can accomplish.”