The Central Trend • May 28, 2019 • https://thecentraltrend.com/66271/showcase/ali-azeem-finds-himself-in-a-wonderful-world-of-extracurriculars/

Ali Azeem finds himself in a wonderful world of extracurriculars 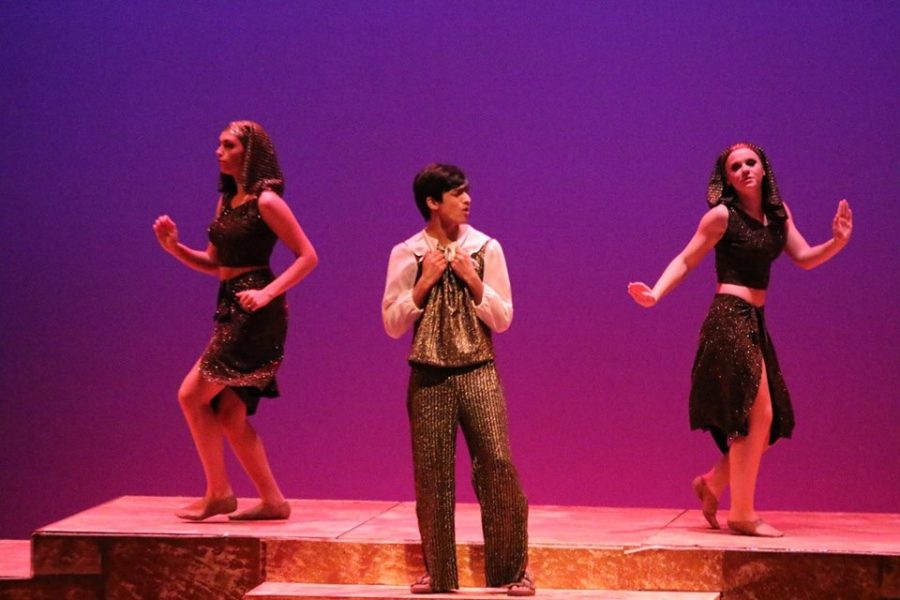 The suggestion to get out and do new things is a line that swarms about high school. While many kids find themselves letting this idea in one ear and out the other, junior Ali Azeem held onto it. He didn’t want to be one of the people that leave high school with regrets, and he won’t be.

As junior year rolled around, Ali’s mind was set on becoming involved with even more than he had in previous years. He participated in many extracurriculars, both old and new to him. Ali took on varsity tennis, the musical, improv, ping pong club, and more, and each activity had its own unique start.

“I’ve been playing [tennis] since I was like five years old,” Ali said, “so getting into it immediately and playing varsity for the high school team was something I’d been dreaming of doing since I was young.”

Ali grew up in a tennis family, so tennis was something that was always in his blood. Whether he is waking up at three in the morning to watch a big match with his family or simply playing against one of his siblings, tennis is something that has remained important throughout his life.

Getting involved with the musical is also something that stirred from his family.

“My brother did [the musical] his junior and senior year, and [he] just absolutely raved about how much fun he had,” Ali said. “He tried to convince me freshman year, but I chickened out the day of auditions, and I got kind of mad at myself, so I forced my sophomore self into the auditorium.”

After forcing his nervous self into the auditorium for the musical, Ali would find himself on that same stage as motivation from a classmate led him to try out for improv.

“I was in the same world history class as one of the captains [of improv], Mark Kemp,” Ali said. “Every day I walked into that class, he would not so much ask me as tell me that I was trying out for the team, so one day, I did.”

The start of most of his extracurriculars had come from the motivation of others. However, the ping pong club came from Ali himself.

“I had the idea [for a ping pong club] freshman year,” Ali said. “My initial goal was actually to try to find a way to make it an official high school sport, but I gave up after about five minutes scrolling through the MHSAA website and decided to make it a club instead.”

His own personal motivation, as well as the motivation of others, has led Ali to be involved in the things that would become the highlight of his year.

However, junior year is notoriously known as one of the most challenging, and important, school years. Ali faced the challenge of balancing his extracurriculars with his schoolwork, attempting to succeed at both.

“[Extracurriculars] simultaneously made [junior year] much easier and much harder,” Ali said. “On one hand, I had a lot of stuff to do for school with not a ton of time to do it. But on the other, I could let loose at whatever thing I had right after school.”

He also always knew that he wasn’t fighting the obstacle alone; the people involved with the same extracurricular were battling the same fight.

“If the biggest problem is energy and being tired from everything you do, it’s very easy to find energy from people who’re in the same activity you are and are struggling with you,” Ali said. “If you’re going to have to grind, at least you’re not alone.”

Ali was presented with the challenge of balancing it all, but with a determined focus and a persistent “grind mode,” he was able to flourish in both. In fact, he found that the balancing act made all things, specifically homework, a lot easier to deal with.

“Extracurricular activities really make it easier to do your work because you realize there’s so much more purpose in your life,” Ali said.

Within that new found purpose in Ali’s life, he was able to find a whole new world of people. No matter what extracurricular it was, Ali always found that the group of people involved really improved the overall experience.

“I don’t even think I can begin to describe how many amazing people I’ve met through what I’ve done,” Ali said. “The people I’ve met are some of the greatest friends I’ve ever known and ever will. I never realized how large a school we have until I got to know and grow close with all the people I’ve come to love.”

And, with good friends comes good times. Ali found that the best part of each activity were the people entangled in the whole experience.

“Definitely the people I’ve met [were the best part of extracurriculars],” Ali said. “The concept of musical, improv, high school tennis, and ping pong — none of them make sense without the huge groups of people it takes to get involved.”

All the people involved in each extracurricular also gave a team aspect to each activity. While tennis was originally the thing that Ali found would have the greatest involvement of a “team,” he found that all the other activities had the same feature, just in a different way.

“Everything else has the team aspect too,” Ali said. “Watching people dance on stage on opening night while you watch hushed in the wings or laughing while your friends drop another hilarious punchline in the auditorium pulls you so far above your normal independent, solitary life.”

Ali has met some of his best friends by following his drive to step out and try new things. His experiences prove that some of the best things in life can come from doing something new.

While the road may have been a bit bumpy here and there, everything Ali has done this year will be something he continues to do. The new worlds he immersed himself in have created some of the most cherishable moments.

“It’s not easy, but that’s never the point, I guess,” Ali said. “To go out and be able to participate in such amazing, different worlds means you get to immerse yourself in an experience that stretches you and pushes you to become a better person in every way.”

When all things are considered, Ali is sure he would do it all over again.

“I wouldn’t trade any of what I do in a million years,” Ali said. “I can say without any hesitation that my life is infinitely better having done all I have than if I’d stayed cooped up at home, waiting for opportunities that are flying by me while I don’t even notice.”

From tennis to the musical to improv and more, Ali built up his year with memories he will always remember. He even found himself doing some things he would never see himself doing while participating in things like the musical.

“I ended up having one of my favorite experiences of all time [doing the musical],” Ali said. “I ended up having so much fun that I broke a promise I made when I was in middle school and took a zero hour just to be able to be around all the people I met.”

Ali learned to give certain things up in order to let new and better things in. He wasn’t, and isn’t, going to let anything hold him back from doing everything he wants to do.

Throughout everything Ali has gotten himself involved in, he has learned the raw importance of getting involved.

“Pencils don’t get sharper by being used — you need to shave off the wood around the graphite to make them useful,” Ali said. “Don’t wear yourself out by going through school. Instead, sharpen yourself by getting involved.”

Participating in everything leaves him with so much more than just the claim of having participated. Ali has experience upon experience tucked away in his memories.

“Doing everything you can means looking back on old pictures and smiling,” Ali said. “It means seeing old comments on Instagram posts and remembering the days you spent with friends. It means reading the notes people left you on cards and posters, reminding you to never forget them. And you won’t.”

While learning about the people around him, and learning even more about himself, Ali was able to have one of the best years ever. He uncovered the not-so-secret secret that high school, and life, is so much better if you step out of your comfort zone and go for the things you care about.

There is so much more to experience in life, and Ali isn’t going to waste his time by holding back due to fear. He has found a whole new collection of extracurriculars to get himself wrapped up in, and he has one year left to experience it all.

“As Ms. Scobell might say,” Ali said, “every school year is a mountain. It’s much easier to climb a mountain with other people to help you and equipment to secure your path. Your teammates and fellow cast members are those people, and your match or show is your equipment.”