The Central Trend • May 29, 2019 • https://thecentraltrend.com/66362/fx-student-news-show/sports/first-half-offensive-explosion-pushes-girls-varsity-soccer-past-holt-4-0-in-district-semifinal/ 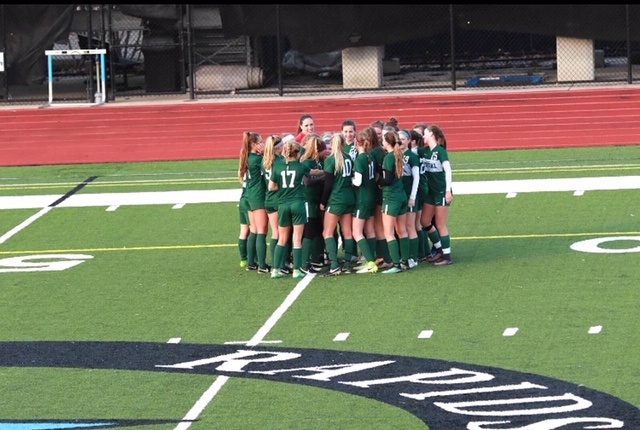 After a nail-biting 1-0 defeat over the Grand Ledge Comets last Thursday, the girls varsity soccer team returned to Grand Ledge to take on the Holt Rams last night. The girls were much more successful offensively as they defeated the Rams 4-0 with all 4 goals coming in the first half. Seniors Kaitlyn Pointkowsky and Ashley Ward would go on to score the first two goals in just the first 15 minutes, and junior Hannah Becker along with sophomore Autumn Burns rounded out the scoring for FHC.

The first half was one of the strongest offensive halves the Lady Rangers have played all season. Kaitlyn scored on a nice pass from Ashley only seven minutes into the game to set the tone for a dominant first half. Later in the game, Ashley would score off of a penalty kick to extend the lead to 2-0 after the Rams’ costly penalty. With only 5 minutes left in the half, Hannah and Autumn would score to make the FHC lead 4-0 going into halftime.

In the second half, the defense continued to connect to the midfield, which then found the forwards wide open for many opportunities at the goal. Autumn, junior Ally Francisco, and sophomore Whitney Currie were all key contributors in connecting passes to midfielders such as senior Grace Kline and junior Jordan Helmbrecht. Grace and Jordan then connected very well with forwards like sophomore Elisha Strawser and freshman Lauren Koczenasz, making room for FHC to continue to get more opportunities at the net. The Lady Rangers couldn’t find the back of the net in the second half, but they would defeat the Rams 4-0.

The ladies now stand at 18-2 overall and advance to the District championship game. FHC will take on the Okemos Chiefs Thursday night in Grand Ledge. Okemos is coming off of a strong win against a solid Caledonia team and will give the Lady Rangers a good game as FHC aims to avenge its District championship loss last year.