The Central Trend • May 30, 2019 • https://thecentraltrend.com/66700/fx-student-news-show/sports/despite-slow-start-boys-varsity-lacrosse-claims-eighth-straight-regional-championship-with-17-4-win-over-fhn/ 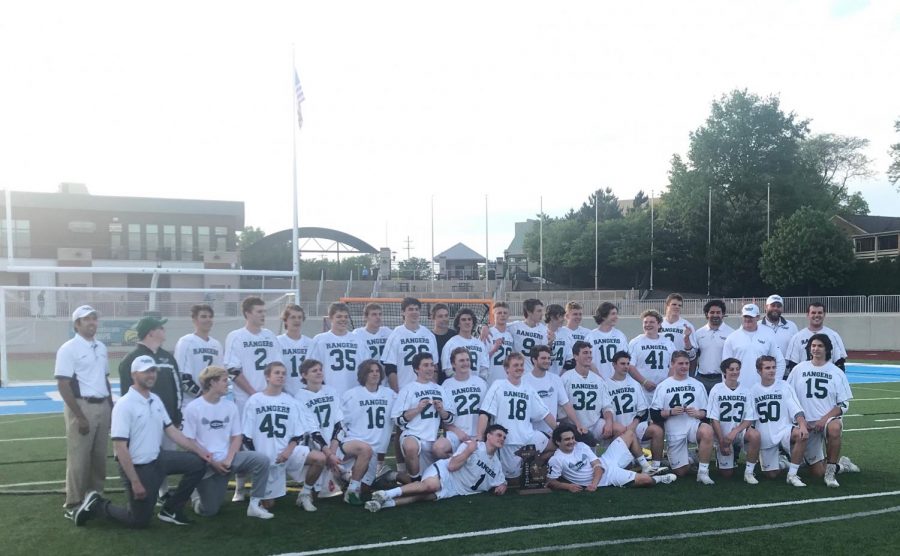 In a tale of four very different quarters, the boys varsity lacrosse team took home its eighth consecutive Regional title with a win over crosstown rival Forest Hills Northern. Even though the team started off slowly— especially offensively— the powerful Ranger offense took over in the second quarter and propelled the Rangers to a comfortable win.

“It’s obvious we didn’t come in ready to go based on the score from the first time we played [FHN],” head coach Andy Shira said. “Hopefully that’s a wake-up call to the guys.”

The boys started off the game lacking energy and without much urgency. Senior Tate Hallock started off the scoring early in the first quarter but after that, a period of stale offensive possessions and sloppy play followed. Not only that, but the Huskies came into the game with a great game plan and simply looked like they wanted it more early on, winning the 50/50 balls and playing with high intensity.

After Tate’s goal, the Huskies were all over the FHC in the Ranger half. FHN held the possession for a span of a minute and a half starting at the 8:30 mark, presenting threat after threat until they finally scored with 7:00 remaining in the first. Following the Husky goal, the Rangers woke up a little bit and began to hold the majority of possession in the Northern half. In a span of 30 seconds starting at the 4:07 mark, junior Jackson Clay scored 2 consecutive goals to give the Rangers a 3-1 lead, the first two of his 6 goals on the night.

“It was a good feeling once I started to find the net tonight,” Jackson said. “Especially because of how slowly we started, it took some pressure off of our shoulders.”

However, only one minute after Jackson’s goals, Forest Hills Northern’s Cameron Kress scored to make it only a one-goal deficit for the Huskies. Just when the Rangers were looking like they would pull away, FHN came back with its own punch. Thankfully for the Rangers, senior Luke Majick scored his first goal of the game with 20 seconds remaining in the quarter, giving FHC a 4-2 advantage at the end of the first quarter.

The first six minutes of the second quarter were very similar to the entire first quarter. While things were going well for the Rangers defensively, they couldn’t get anything done in the offensive half. Senior Riley Murphy was all over the place on defense, sliding efficiently and bodying the Husky attackers. Senior Cam Deines also was a big help on defense with his constant coverage and loose ball wins.

The Huskies were executing their game plan to perfection, taking advantage of each and every offensive opportunity, as they were not forcing bad shots. FHN’s Ian Roy brought the game within one with 6:43 left in the first half, and suddenly the Rangers were in legitimate trouble. However, an immediate answer from Jackson brought the lead back to two only nine seconds later, and the score was now 5-3.

Thanks to 2 more goals from Jackson, 2 goals from senior Evan Metaj, and a goal from Luke, the Rangers went on to score five unanswered goals in the final five minutes of the half, and the lead was 10-3 at the interval. While the Rangers now had a decent lead, this was not nearly enough for the coaching staff and players alike.

“During halftime, our captains talked to us as a team, and we all knew that putting forth effort like that was unacceptable,” sophomore Carson Deines said. Last time the two teams played earlier in the season, the Rangers led the Huskies 14-1 at halftime. With only a one-goal advantage until the final six minutes in the half, this was a completely different game.

“Once guys finally realized that FHN came to play, I think that woke them up a bit, but we can’t rely on that happening,” Shira said. “Our guys need to take pride in what we do and how we do it.”

While the effort did improve in the second half, the score did not correlate with the increase in work rate. In the third quarter, Carson—assisting his third teammate of the day— threaded the needle perfectly to find Jackson, who scored his sixth and final goal of the game with 7:18 left in the third. Just two minutes later, Tate scored his second goal of the game, and the Rangers were starting to roll on offense once again. However, in the final five minutes of the quarter, the offense hit a stand-still and failed to score another goal before the break.

The fourth quarter is where things picked up again offensively. Evan and Luke each scored their third goal’s within 30 seconds of each other, with both of the goals coming with just under ten minutes remaining in the game. With these two goals, the Rangers now held a very firm grasp on the lead, as they now led by 14-4.

Less than a minute later, Carson took the ball down the middle himself, beating multiple opponents as he reached the goalie before burying the ball in the back of the net. Tate then scored his third goal in the game with a bouncing shot from 12 yards out, giving FHC a 16-4 advantage.

With this win, the Rangers claim their eighth straight Regional championship and move on to 19-1 on the season. At 6:30 pm on Friday, the boys will travel to Okemos take on the Warren De La Salle Pilots in the State quarterfinals, a team that defeated a solid Grosse Pointe North team in its Regional final. However, the Pilots have fallen handily to Detroit Catholic Central, University of Detroit Jesuit, Cranbrook, and Detroit Country Day, all teams that the Rangers beat, with all of the FHC wins being blowouts besides the DCC game.

While claiming a Regional championship is always a goal for the FHC lacrosse program, according to coach Shira, there are many things that the team needs to work on ahead of the game on Friday.

“We’re going to work on attacking ground balls more, instead of waiting [for the ball] and trying to be cute with how we pick the ball up,” Shira said. “We’re also going to work on communicating defensively. No matter what your skill level is as a lacrosse player, everyone on my roster can talk.”