The Central Trend • May 31, 2019 • https://thecentraltrend.com/66773/showcase/teachers-and-students-ruminate-over-the-value-of-their-country-in-todays-society-is-america-overrated/

Teachers and students ruminate over the value of their country in today’s society: is America overrated? 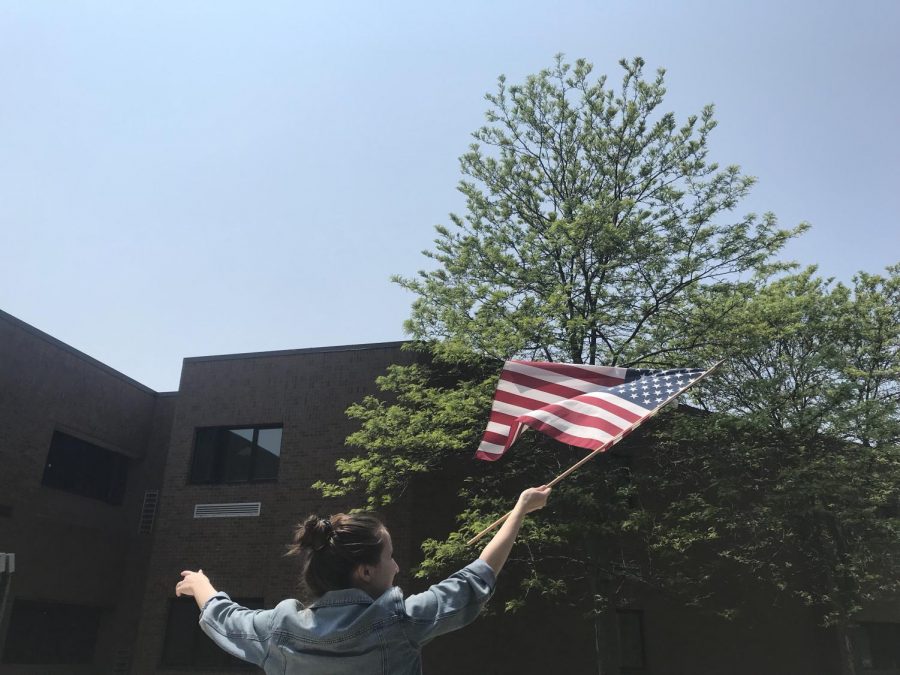 He thinks of their vigor and sacrifice, something that each of them along with thousands of other people, embodied for the growth of their country 74 years ago, and it makes him question the relationship between today’s society and the freedom that his grandfathers nurtured, tended to, and fought for.

“When I think of America, the first thought that comes to my mind, honestly, are of my two grandfathers who survived the Great Depression, the era of prohibition, and went off to fight in World War II,” Anderson said. “I think about the freedoms that they fought for and that some of their friends died for. And I ask myself, are we living up to the potential of what those guys fought for three generations ago?”

In Anderson’s perspective, the sight of America today is a fractured image. He believes that with the current social climate of the nation, modern Americans are not embracing the potential that their ancestors fought for them to have.

“When I think of America right now, I think we are, unfortunately, torn at the seams,” Anderson said. “I think that deep down, America is better than perhaps what we are currently living out.”

In the past few decades, America’s presence, in the world and at home, has been a salient topic of discussion because of its economic power and frequent activity in domestic affairs. Due to the country’s rise in power in the twentieth century, many deem this “land of the free” a superpower, a golden nation. U.S. History teacher Steve Labenz claims that many people even describe the twentieth century as “an American century” because it was an “unbelievable period” in the country’s history.

However, at the turn of the century, many issues have disrupted the nation’s stability, which has made some wonder, is America as great as people make it out to be?

According to Anderson, America’s strength has partially deteriorated, and it lends itself to the idea that people aren’t fully connected. Similarly, Labenz notices a division that has fragmented a sense of understanding among people inside the country.

“It’s a negative period right now,” Labenz said. “We’re so divided, and people are just so unhappy with the other side. If you’re on the left or the right, the person on the opposite side just can’t believe that you have that opinion. And that’s frustrating.”

One topic that has affected this division is the recent immigration crisis, specifically on the border near Mexico. Even though similar situations have occurred in past years, the attempted action taken against immigration disappoints Labenz.

“Most people came to this country looking for a better life,” Labenz said, “and it was supposed to be offered. ‘The huddled masses yearning to breathe free’ [is what] it says on the bottom of the Statue of Liberty, and it bothers me that we’ve become so selective about who we want to have [in the country] because I don’t think that’s what we’re supposed to be. Is the Statue of Liberty only for good days? For sunny days? Or is it for all time?”

This diminished regard for people is also acknowledged by junior Tony DiMeglio. Tony, however, finds that the issue that is dividing America is deeper than a lack of connection and politics. Rather, he is concerned by the corruption he sees in the country, which he says is the effect of unequal and misused power.

“I think America is overrated,” Tony said. “We are seen as a global innovator. We are seen as the world leader, but we aren’t innovators. We should be near the top in order to obtain the rank of ‘America is great,’ but we aren’t because we would rather focus on profit and capital over people and society and humanity.”

In his opinion, Tony believes that the nation may be beyond a point of healing because the corruption is too infused in the nation’s economy; he says the only “feasible way” to reverse this issue would be through a revolution because small changes over time would not be effective.

Anderson, however, believes that although there are apparent flaws in the country, the fundamentals of freedom and democracy are still evident; therefore, America can be mended and can heal.

“Right now, I don’t think we are living up to the potential of what my grandfather’s fought for,” Anderson said. “But I believe that the foundation is there. We have democracy, although flawed. We have the freedom to choose where we eat dinner, what news station we tune into, [and] who we support politically. But the framework is there for a more involved population, a fitter and tougher population.”

This freedom is a right that junior Robert Atchison is dedicating the next six years of his life to protecting. Currently, he is in the Army National Guard, which he participates in one weekend each month, and he plans on furthering his service by becoming a Horizontal Construction Engineer in the military.

When looking at America, Robert doesn’t see corruption; he sees something he is proud of and a way he can help the people around him.

“I feel proud,” Robert said. “I believe we can get unity, that we can become a powerful country again. National Guard is mainly to help with natural disasters and to help citizens in their state, and I want to help anyone I can.”

Similarly, junior Tara Blue feels a sense of pride when regarding her spirit for her country. Patriotism has been a salient aspect of Tara’s life as she’s grown up, and to her, America is her only home: one she feels lucky to live in.

“[It’s] the greatest country in the world,” Tara said. “Patriotism, that’s how I was raised. That’s what I always heard. We have a lot of freedoms and a lot more opportunities than a lot of other countries. I think we’re really lucky to have [these opportunities]. To me, America is the best because I’ve always been here. It’s my home.”

During the Fourth of July, Anderson notices an increase of patriotism, both in himself and the people around him. On this day, this feeling of trust in his country is strengthened due to the connection he witnesses in his community.

Despite the instability and fragmentation—whether economic, political, or social—Anderson believes that, at the end of the day, Americans are simple and “genuinely good.” He believes that to mend the country and further its potential, Americans need to cultivate a greater connection, and through this act of unification, the nation can heal.

“I believe in [America],” Anderson said. “I believe in community. The success of our nation will be community to community. People who live long, fruitful, rewarding lives are typically connected to their communities. People crave connection.”

Anderson claims he is critical of America and acknowledges its flaws, but he also has a sense of hope among its people.

“We are an imperfect nation,” Anderson said. “But again, the backbone is there. There [are] some great places to go, but at the end of the day, American freedoms will hopefully be the bridge to a better future. To those who say America is overrated, I’d say right now, we’re just trying to find our way.”